What Is Joe Biden Good At? Because It’s Not Being President

BUCK: Clay, I want to pose this. It’s a question I want everyone to think about so there are a lot of answers, but I think it puts our conversation in a pretty useful framework right now. What is Joe Biden good at? Because I think it’s clear it’s not being president, and everyone who’s being honest is seeing that play out in real time.

CLAY: It’s such a great question. I don’t know the answer because, Buck, if you just rated Joe Biden right now and tried to find out what is the least bad performance by Joe Biden so far… I was thinking about this. I’m glad you raised it. He’s clearly failing on an epic level at the border. Inflation is a disaster. We’re talking about epic, unbelievable levels of murder that are going on.

There are 10.9 million open jobs right now, and we can only somehow get 194,000 people hired. All of those things are unmitigated disasters, and certainly foreign policy with Afghanistan, everything could not have gone worse. The only thing that I can say that hasn’t turned to crap since Biden took over is he hasn’t completely eliminated the tariffs and the hard line that Donald Trump took against China.

Now, he’s not gonna be anywhere near as effective, but you know what? Somebody was tweeting me; they were like, “Hey, you’ve said before you don’t root against the American president to fail,” and that is true. I don’t think… Regardless of who the political party the president represents is, I don’t want China to think that they can invade Taiwan because we have an incompetent president, right? There are things that every president’s going to do or not do that you agree or disagree with.

BUCK: That’s bad for everybody, yeah.

CLAY: That’s bad for everybody. Look, I don’t want World War III to happen because Joe Biden is so bad at his job, right? But really, other than not changing some of the policies on China, it’s almost impossible be worse. You and I both, Buck, expected that Joe Biden would be a really bad American president. I didn’t expect for it to be this bad this soon.

BUCK: He has gone below my already very-low expectations.

BUCK: And this isn’t just something that you and I are feeling. Yeah, we work in radio and politics and media. The polling shows this.

BUCK: The people who have a mind that is open to being changed by reality and facts — independents, swing voters — and all the data.

BUCK: Even some sliver of Democrats are disappointed in what’s going on with Joe Biden so far up to this point. And I do think it’s important for everybody to remember where we were a year ago and what they were telling us it was going to be like, right? All the speeches about, “I’m gonna crush the virus, not the economy”?

It turns out Joe is pretty good at crushing the economy and not the virus. It shows us that there was really no effort. All the talk of unity? You know, they made Trump into this demonic figure and were willing to as we know lie about him on Russia collusion. We could do a three-hour show now on all the lies they told about Trump. But the promise was there will be normalcy and unity when they’re in power, and that’s how they sold it to people in Michigan, Wisconsin, Georgia, Pennsylvania.

BUCK: They said, “All right, fine. It’s covid. It’s a pandemic. Joe will bring us back to normal! Joe will ‘build back better,'” right? Give me a break. Now we see this. No effort. The unity thing went away day one, right, as soon as he sat down the Oval Office.

CLAY: And started writing all the executive orders.

BUCK: It might as well have been AOC sitting in the Oval Office at that point in time. And then you’ve seen since then everything that they try to do, everything that is in Biden’s purview doesn’t go well. You have to lower your expectations constantly even if you have low expectations to begin with, and now they’re trying to tell us all this stuff like we can’t actually see. Where is inflation?

Where are there, what, 11 million jobs open? What are the reasons for this? I don’t know. Maybe businesses and just the people in the economy working the economy in general with concerned about unnecessary regulation, inflation, huge spending, raising taxes. The continuation, by the way, of the lockdowns in the blue states?

CLAY: Yeah, and I think we need to keep hammering home for average people out there — and you and I have both been average people. I live in the middle part of the country. I pay attention as I’m driving around. What are the prices of gas? Gas is at seven-year high, Buck; $80 a barrel now it’s gone over. This is real money out of real people’s pockets.

Study that came out this week: The average American, because of the rising rate of inflation, is paying $175 extra a month for the same things that they would have bought in past years. Biden keeps saying, “Oh, I’m not gonna raise taxes on anybody making less than $400,000 a year.” The American people are smart. When they look at their pocketbook and they recognize an additional several thousand dollars, that’s real.

Let’s talk about this for a minute, if you’re making $35,000 a year, let’s say. You’re the average American family out there, $45,000 a year, 50, whatever it is. A couple of extra thousand dollars out of your pocket — which is what inflation is costing — that you are not able to deal with at all because you might have already had a tight budget.

The fact that your taxes are not being raised by the federal government doesn’t mean that the money going out from your pocket for buying the basics in your life isn’t also going up. It’s as if people don’t recognize — and I want to play a clip for everybody when we come back in this next break the reaction on CNBC to only 194,000 jobs.

BUCK: Well, a lot of them don’t understand business, and I think that there are those in the Democrat Party who would say, “Oh, but what about the Rattners?” Remember Bruce Rattner was in charge of the GM restructuring, the Obama administration? Hedge fund guide, right? They’d have people who are coming from the business world.

Yeah, but they go along with an ideology that says that they can override, with enough government power, market forces — or ignore market forces and basic human nature because they’re so smart. So you either have ignorance pushing Democrat economic policy or extreme hubris, a word that I’ve been using a lot lately.

But I think it’s quite applicable here, where they think all the sudden it doesn’t matter. Clay, we are approaching $30 trillion in debt. Everybody should just take a moment and go back and look at what was happening in the country in 2009 and 2010 when we were at a fraction of the national debt that we’re at now and people were deeply concerned about their children, their grandchildren’s futures and what it means.

We are seeing right now, this is like the tide is rising up at our feet. We are seeing what’s happening with inflation because of these government policies. And it’s because there are people who believe that the government is effectively Santa Claus. You just can give free stuff out to everybody, and it’s only the big, bad, mean, evil Republicans who don’t want everyone to have endless free stuff. There’s no way it’s free. 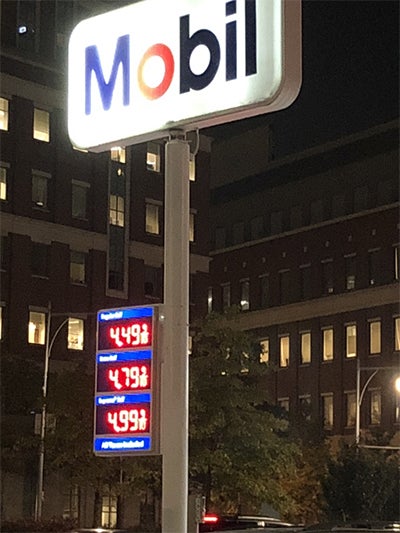 CLAY: They say a big point that I don’t think a lot of people have recognized. And, by the way, Republicans are not ceasing to be blamed here because they’ve gone along to a certain extent. Modern Monetary Policy basically is instructing politicians that debt doesn’t matter, that the amount of national debt that we take on which has become massive because of covid, at a level of government spending we haven’t seen, Buck, since World War II when we were fighting the Nazis and we had to produce all the materiel to allow the war to be fought. And the Japanese, right?

BUCK: Yeah. We had a lot of stuff going on in World War II.

CLAY: Yeah. But that is kind of, in essence, we spent the same caliber of GDP on fighting covid as we did to fight the Nazis and the Japanese in World War II and win that war. It’s pretty crazy, when you think about it.

So we have massive debt, a tremendous amount of misery, the destruction of freedom, and where are we now? Look at where the economy currently is, and it looks like I think it could get a whole lot worse. You look at the supply chain going right now.

BUCK: It’s not actually going to be milk. It’s gonna be stuff that’s brought in from China.

BUCK: “That plug you need to get that machine doing the thing it does for you? It’s not gonna be in stock for six months.”

BUCK: There’s gonna be problems like that. That’s gonna be a real issue. But we’ll come back. By the way, the CNBC thing is pretty funny. It’s like, “Whoa!”

BUCK: Turns out he’s building back better not so much. Not so much with this Biden administration.