CLAY: We have a great Memorial Day story for you right here. So Nick Leo is about to hop on with us. His grandfather, Nicholas Leo, joined the U.S. Army at 19 as a member of the 23rd Headquarters Special Troops known as the Ghost Army. They landed in Normandy. By the way, I have been to Normandy. One of the greatest days of my life was getting to spend an entire day touring the beaches of Normandy. It still looks almost identical in many of those places as it did in 1944 when our Army stormed the beaches there. 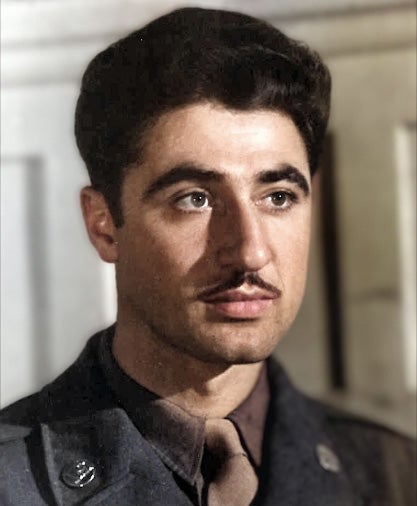 While in France, Nicholas Leo met a young French woman need Pirette Mueller, fell in love. After the war, he went back to France to marry her with German POWs as witnesses. They were together 75 years before she passed away in 2020. He joined the Navy Reserve, served as a Navy radio operator during the Korean War aboard the destroyer USS Gatling. Where this comes into account here is, I have open DMs.

Sometimes that’s because people are telling me that I’m the worst human being on the planet. Other times it happens that people slide in and tell me interesting things. I can’t keep up with all of them, but I happened to be able to see Nick’s message to me. Nick, come in and tell people what you sent to me and what happened as a result.

LEO: Hey, Clay, how you doing? Thanks for having me on. So we had a ceremony for my grandfather in our local town and we had a couple representatives of local government from both New York Senators Schumer and Gillibrand, and he received all this recognition, and he also got letters from Pelosi and Biden. And my grandfather hates probably (laughing) every single one of those people and had Schumer is Gillibrand actually shown up he might have some words. But he was very respectful to everybody because it was such an honor.

CLAY: By the way, he’s 99 years old at the time that all this ceremony is going on, right?

LEO: Yeah, exactly. But, you know, he’s still as quick as you can imagine for a 99-year-old. Nothing gets past him. So Trump was his favorite president of all time. And I said to him after, I said, “This is too bad that you couldn’t have gotten this letter and all this recognition when Trump was in office,” and he goes, “That’s my only regret, I waited all these years.” This was declassified in 1996 that he was part of this; so it’s been a long time coming that he got this recognition.

So I said to him, he said, “I just wish this would have happened under Trump.” So I thought to myself, I said how can I get him something from Trump? So that’s when I went to Twitter and I sent a bunch of DMs out to the Trump kids, Kayleigh, Lauren Boebert, Marjorie Taylor Greene. And then I thought to myself, “Send it to Clay, send it to Clay,” of course. And you checked the DMs, and within five minutes, sure enough I got a response. I couldn’t believe it.

I was like, “Wow, that was quick.” So I said to you, I asked if possibly you could get maybe something over to the Trump people that we could possibly get him a letter saying something, similar to what we got from Biden. And within two weeks from you responding, I come home from work and find a letter addressed with the presidential seal and West Palm Beach address on it.

I’m like, “You gotta kidding me.” So, sure enough I open it and it is exactly what I thought it was gonna be, a letter for my grandfather congratulating him on this honor from Donald J. Trump. So you had made that happen, and it just blew my mind that it was like it went from just a DM to get this letter in the mail and then the next day I brought it over to him, and you should… I handed it to him, and he looked at it for a minute and then all of a sudden he looks up at me and hiss face gets all bright and he just goes, “Trump?” 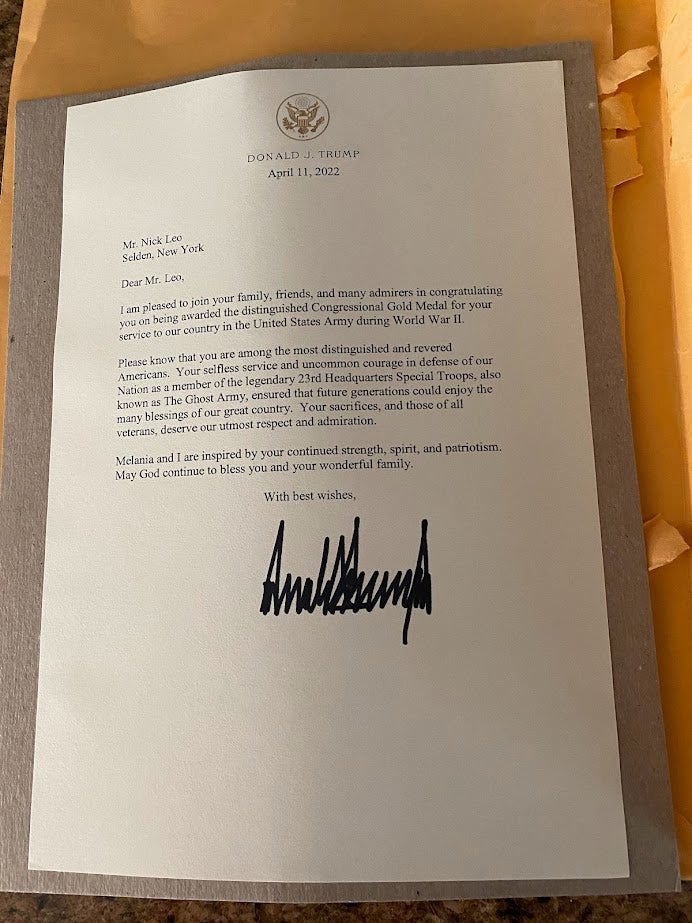 And I said, “Yep, you got you a letter from Trump.” He says, “You gotta be kidding me,” and I said, “No, no.” He goes, “Of all the politicians I’ve written,” over the last how many years he had, he goes, “the only guy who’s ever responded was from Trump, and now I finally got a letter from him personally congratulating me,” and it made his day. When I tell you he talked for two hours straight, I haven’t seen him with this much energy in months.

And, you know, I just wanted me and my family Clay are just so thankful for you being able to take the time to do that and, you know, send the message along. You know, it’s something as simple as, you know, a letter but it means so much to somebody like him who waited so long for this recognition — and Trump was his favorite president, too; so it was —

CLAY: So 99 years old, he gets a letter from Donald Trump, his favorite president, and I… Look, all I did was I saw this story. I am eternally thankful to particularly World War II veterans, right?

CLAY: If you have ever seen what they did. And so I happened to DMs, I saw this, I reached out to the Trump people, and to their credit, they responded almost, like you said, fairly instantly.

CLAY: Now this is a great story. I think this oftentimes doesn’t get told. Trump’s a good dude in general. And I know the media wants to destroy him and attack him and say he’s an awful person, but I knew as soon as I saw your 99-year-old grandfather, that he was a huge Trump supporter and that he would just — ’cause he had gotten a letter from Joe Biden and you sent it and said man, he wished this had happened when Trump was in office. I said, “I know if I get this to the Trump people, they will send him a letter.” And what…? Your grandfather, he died recently, right? So he just died, but this is one of the last great moments, I imagine, of his life was to get this recognition from the man he was a big fan of as commander-in-chief.

LEO: Yeah, absolutely. This was the last time I actually… He passed away a week ago, yesterday, actually, and it’s the last great memory I have with him in giving him this letter. And he just… He finally got — and I think that’s part of it. He was ready to go. He’d got the recognition he’d finally deserved. He waited 51 years before they declassified it, and then you add another how many years for this to go through to Congress.

And I mean, it’s one of those things that seemed like he got what he wanted and then he was able to just… You know, he was good. And, you know, he was just, like I said, the happiness on his face. If you look at the picture that I had sent you with him holding the letter you could see the smile on his face. It shows how happy and grateful he was of it all. 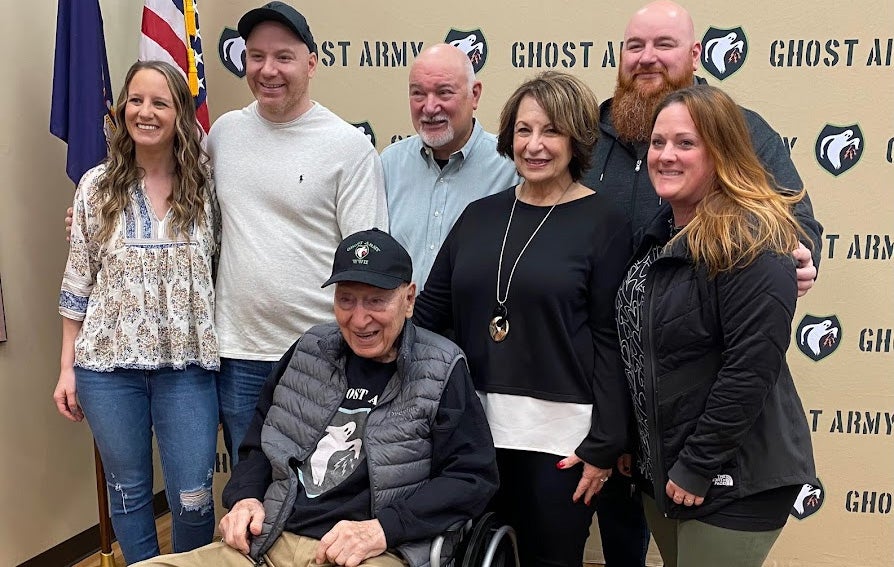 CLAY: No doubt, and look. It’s up, I believe, at Clay and Buck. There’s so many awful stories I feel like, as you well know, Nick, on a day-to-day basis that Americans hear about. I do think that oftentimes there’s really great stories like this that don’t get the light of day. So I just want to thank your grandfather, thank everyone out there who served and have given their lives.

Nick, I appreciate you reaching out to me. I was glad to be able to be a small part of helping him to be honored for his service. I’m glad that the Trump people were so responsive and were able to get him that letter and thank God for his service, and I hope you and your family are able to have a little bit more joy in mourning what was an incredible life that he had. Thanks, Nick.

LEO: Thanks, Clay. Thank you so much again. Me and our family appreciate it.

CLAY: Try to do a little bit of good out there as we roll into the Memorial Day weekend. Look, this is an incredible honor to get to talk to you guys every day because so many of you have served and fought for this nation. Whatever you’re doing with your family, take a moment to thank everyone who has given their lives to allow us to have the freedom that we do every single day. People like Nicholas Leo, 99 years old, who stormed the beaches of Normandy to preserve freedom for the world. Thanks to Donald Trump for helping to honor him.