CLAY: Some breaking news out there that is good news. Thanks to the Fifth Circuit, OSHA has announced that they are suspending all implementation of Joe Biden’s covid vaccine requirement as a result of the Fifth Circuit’s decision and says (this is up on their website), “While OSHA remains confident in its authority to protect workers in emergencies, OSHA has suspended activities related to the implementation and enforcement of the [emergency temporary standard] pending future developments in the litigation.”

So right now, OSHA’s mandate of January 4th that everyone be vaccinated is not being enforced based on the Fifth Circuit standing up and saying that they believe this is unconstitutional. We have a good guest who may have a little bit of an opinion on that as well as the Kyle Rittenhouse case. He is Andy McCarthy, contributing editor at National Review and the former assistant United States attorney for the Southern District of New York.

Andy, that news on OSHA is breaking. I know you’ve got a variety of different opinions on a ton of different cases out there right now. But in your mind… Did you read the Fifth Circuit opinion? Do you agree with it as it pertained to their analysis of the vaccine mandate from the Biden administration?

MCCARTHY: Clay, I didn’t, and one of the things I’m struck by now that OSHA is backing off this — and we should point out to people that this emergency procedure that they want to use, they’ve only used it a handful of times in history. Almost every time they’ve litigated it, they’ve lost. They haven’t tried to do it since the 1980s.

MCCARTHY: And under the Administrative Procedure Act. This is one of those things. It’s the most remarkable emergency I’ve ever heard. Biden announces something that he’s gonna do on an emergency basis and nothing happens for two months, and then when it finally happens, they say, “It goes into effect two months from now.” So if they complied with the law, they could have told us all what they wanted to do and they would have the normal notice-and-comment period. They didn’t need to do this by an emergency. But they obviously tried to slam an emergency provision past people because they knew what they were doing was not correct.

BUCK: How do you think this is gonna shake out in the courts? We’ve got the Fifth Circuit. People are thinking there may be expedited Supreme Court review. What do you see happening on this Biden-OSHA emergency vaccine mandate?

MCCARTHY: Buck, I think we’re seeing a pattern of behavior by this administration where basically they create a threatening, intimidating atmosphere by saying they’re going to do things, and then they don’t actually follow through and do ’em, but they hope that the fact that they’ve threatened to do them gets people to conform their behavior to what the left and Biden wants them to do.

So it wouldn’t stun me at all if we never hear another thing from OSHA about this, just like with Garland’s memo from earlier — I guess it was last month — where he’s threatening that they’re gonna have the FBI and the U.S. attorneys across the country investigate parents who are protesting the progressive indoctrination in their schools. I don’t think… They don’t have any federal jurisdiction. They’re not gonna bring a case about that.

What they wanted to do… It’s a brushback pitch. They want to make people think that if they exploit their rights, if they use their rights, that the FBI’s gonna conduct investigations on them — and maybe they have to go into their pocket and retain counsel, and maybe they have to go through all the anxiety of being in an investigation. I think it’s just they’re filling the air with a lot of coercive, intimidating, threatening stuff. But in the end, they know legally they really don’t have a great leg to stand on.

CLAY: Yeah. Andy, so we’ve got the Rittenhouse case out right now with the jurors, and obviously there are many different legal issues, and your analysis of OSHA and what might happen with the Biden administration, I tend to agree with. I think it’s more threat than anything else. What do you think is going on with the Rittenhouse jury? What are the chances, based on what you have seen of this case, that we could get a mistrial and/or a mistrial with prejudice? And in your experience as an attorney, how would you assess the overall atmosphere and basically the tactics of the prosecution, of the defense, and of the judge in this case?

MCCARTHY: Well, it’s very interesting. We just heard that there’s a note from the jury. We went all day yesterday, the first day of deliberations, without really any note. And notes are usually during deliberations, that’s the window that we have, the tea leaves they say we read to try to figure out what the jury is thinking, if they’re arguing or what they’re homed in on. That’s what usually tells us.

This is one of those oddball cases in the sense that most cases where there’s no real dispute about the facts of what happened don’t go to trial, they’re usually guilty pleas. Here the facts are pretty clear of what happened here, and what the case is about is a straight-up legal dispute, which is: Did Rittenhouse act in self-defense? Which would be a complete defense to murder and reckless endangerment and attempted murder charges, which is what he’s facing.

So we may not get a lot of notes because the jury has the judge’s legal instructions, and that’s really what the case comes down to: The self-defense instruction. But very interestingly, today midday they’ve now asked to see the surveillance video. And what I assume they’re homing in on is the defense has contended all along — and I think the video plainly shows this — that Rittenhouse was being chased.

That is, that he’s not the assailant; he’s the one who’s being assaulted by other people. And the prosecution had this drone video that they brought in at the end — really after they shouldn’t have been able to introduce any new evidence into the case — which is alleged to be distorted and it looks like they held out the version of it that they wanted to put into evidence. They didn’t give to the defense, the defense contends, until after the evidence was closed.

So the defense is saying they pulled a fast one. But they’re saying that this distorted video — which is what the prosecution’s making its argument from — shows that in the first encounter with this guy Rosenbaum — who’s the first guy who got shot — that Rittenhouse is the assailant rather than someone who’s fleeing. Now, I don’t think that that’s plausible under all of the evidence that we heard in the trial, but that’s their story, and they’re sticking to it. And I have a feeling what the jury is asking for now is to see all the relevant videos so that they can evaluate that claim.

BUCK: Andy, I wanted to ask you before we let you go… We always appreciate Andy McCarthy coming over to join us. He’s over at NationalReview.com. You can read his stuff there. Obviously, you can see him frequently given his analysis on Fox News. Andy, Jake Angeli, better known as “the QAnon Shaman,” just got sentenced to 41 months in prison. You were at the Southern District for, what, over 20 years?

So you’ve dealt with lots and lots of criminal trials. There’s no dispute about him being in the building and illegally on government property. Is that a fair sentence, in your mind? And also, is there anything about the detention of some of these nonviolent offenders from January 6 that you feel is excessively punitive and politicized?

MCCARTHY: Well, let me start with the second part, Buck, because I think that’s the easier one.

MCCARTHY: And that is whether people get bail is a big… There’s a big difference between whether you’re entitled to bail and whether you’re guilty. So even if we think they’re guilty, they should be entitled to bail if there’s not a real risk of flight or danger to the community. And I think there’s a lot of people who are being held under circumstances where the government isn’t really even saying when they can possibly try this case.

So they could be held for months and months under circumstances where they’re not really a risk of flight or a danger to the community, and I think that that should be unacceptable, and people should think that’s not fair no matter what they think of January 6th. As far as a 41-month sentence concerned — you know, 3-1/2 years, right? — I don’t have… In the abstract, I don’t have a problem with the idea that somebody who obstructs Congress when they’re trying to conduct a constitutionally required proceeding should get a 3-1/2 year sentence.

But what I think people ought to take away from this is the rhetoric of the Justice Department, of Garland, of Democrats from the beginning on this has been that this was an insurrection that threatened the United States, that threatened democracy. And according to Garland, it was worse than 9/11, worse than terrorist mass murder attacks, which I used to prosecute for a living. 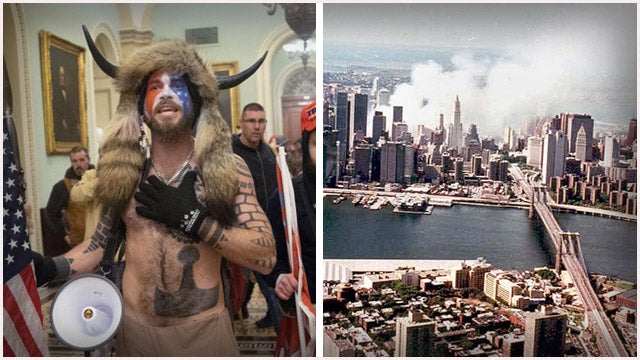 Now, if a terrorist who wanted to destroy the United States and plotted or carried out a mass murder attack, if he got a 3-1/2 year sentence, I think we’d all say there was something really wrong with that because those people are the people who get thrown in jail and you throw the key away and everybody says that’s exactly what ought to happen. Yet in connection with this guy, we’re talking about a 3-1/2 year sentence and there’s actually a plausible question about whether that’s a little too harsh or not. So I think we really get a good measure of some of the rhetoric around January 6. You don’t have to like January 6th —

MCCARTHY: — to say that some things that have been said about it by the Democrats and Merrick Garland are ridiculous.

BUCK: Not an insurrection. Andy McCarthy, everybody, NationalReview.com, check him out on Fox News as well. Andy, appreciate you making the time for us. We’ll talk to you soon.