CLAY: We’re joined now by Bill O’Reilly. He’s got 18 number-one bestsellers, including the latest book: Killing the Killers: The Secret War Against Terrorists. And he has the latest column called “The Fall of TV News” about the media’s obsession and fear of cancel culture. You can read that at BillOReilly.com. Bill, I appreciate you joining us. I wanted to hit you right off the top here. Obviously, we’ve got January 6 prime time hearings tonight. But it’s as if the Brett Kavanaugh assassination attempt didn’t even happen. Buried on the twentieth page of the New York Times. The Washington Post is treating it the same in terms of significance of news story, as a random defensive coordinator and Jack Del Rio’s opinion on January 6.

CLAY: How dishonest is the treatment of this story, and does any of that surprise you?

O’REILLY: No. None of it surprises me. Thank you for having me back, you guys. I appreciate it. And I’m glad you are doing very well. Everybody should know, it was a tough role to take over for Rush Limbaugh, and you guys are fulfilling it.

O’REILLY: The corrupt media is obvious to anybody who has a brain of any capacity. So not only do they avoid any unpleasantness in the progressive Biden community, but they ignore stories like the Buffalo clinic, that was torched on Tuesday night, all right? And two firefighters were injured by the arson, and this was a clinic that referred pregnant women for adoption. And you can imagine, if a Planned Parenthood was torched with injuries, front page every newspaper, lead on every network newscast. This was not mentioned in Buffalo, New York.

And I’m going to submit to you, that almost everybody listening to us right now, has no idea it happened. Now, if you watched my broadcast, the No-Spin News on BillO’Reilly.com and many other outlets, you’ll see it tonight. But this is a scandal, and the only good news here is it’s backlashing. It’s backlashing against the progressive left, and I believe that they are going down big time in November, just as we saw in San Francisco and L.A. this week, and that there will be a new resurgence of traditional governance and thought in America. That is what I think will happen.

BUCK: Bill, you know, tonight, the January 6 prime-time extravaganza is going to be underway on a number of networks. CNN is going all in. They are covering this like the pre-game of the Super Bowl.

BUCK: Do you have any sense that there will be something that comes from this that any normal person will be talking about it in a day or two, or is this going to be a giant prime-time nothing burger, where no one changes their mind, who wasn’t already all in on this in the first place?

O’REILLY: Okay. Well, it’s tragic that I can’t watch it. Because on the Food Channel, they’re having avocado toast night.

O’REILLY: So I have to be there tonight. David Axelrod is an honest man, but, you know, is Obama’s guru. Very liberal guy. He just came out and said, “Look, if they don’t have anything new, it’s going to be a debacle — and if they did have anything, they would have teased it out. They would have leaked it out to heighten curiosity to watch this exposition.” Right? You know how it works in showbiz. You got a big story, you leak out the story so people come in and watch the story. Well, we don’t have anything. So what I think will happen, and I could be wrong.

I will give it seriously about ten minutes. But I don’t see anything new or hear anything new in ten minutes, I’m out of there. I have the Rangers playoff here in New York. I have a lot of stuff to do and the avocado toast. So I don’t think there’s going to be anything. And I think after 20 minutes of sheer boredom, sheer hate-Trump stuff within that only Robert De Niro and Colbert would like, that everyone is going to flee, and the only network I’m thinking Fox News will rack up big ratings.

CLAY: Bill, we know you’re friends with Donald Trump. You guys have had a successful tour all over the country, talking about parts of his presidency. Obviously, Buck and I went down and did a full hour with him at Mar-a-Lago in February. There’s been some rumors that he may announce for president, running in 2024, before the end of this year. Do you think that’s likely? How would you assess President Trump based on your relationship? I know we agree with you, that we’ll have a red wave. And a big wave in November, in about five months. Do you think he waits for that red wave and then announces afterwards? Where is President Trump based on your understanding of his political calculus?

O’REILLY: Okay? So I can’t… I can give you a for and against. So against this announcing now, means it’s harder to raise money for his political action committees because once you announce, all the campaign finance donation laws change. So to maximize your money going into your PACs, you don’t announce until January ‘23. I don’t think he’ll hold off that long. So then you calculate, “Well, when is the most advantageous time to do it to get more bang for your buck?” It would seem to me, the weekly after the midterm elections. That’s what it would seem. But, again, Mr. Trump is an independent thinker. He marches to his own drummer, as the cliche goes (laughing) so nobody knows. But he wants to run again. There’s no doubt about that.

O’REILLY: No. Biden doesn’t even know when the next election is. He doesn’t know anything. (laughing) It’s inconceivable the man will run again. He just can’t do it, because once he gets waxed in November, then basically all he and Jill are going to do is sit in the White House for four days and then spend three days in Rehoboth Beach, Delaware, which is what they do now. But he’s not going to get any legislation passed. He could write up a few executive orders that will be challenged in the Supreme Court, in federal court’ he’ll lose most of them. So he’s done. So now the Democrats, and I know this to be true. Are searching around for a possible alternative. It can’t be Kamala Harris. I think the poll numbers now are 12 people like her in the United States of America.

O’REILLY: Out of 330 million, just to have 12, that’s not a good sign. So the Democrats are in disarray and they will continue to be — and I’m not a partisan guy, as you guys know. I’m not a party guy. I’m a registered independent. But progressive policies are hurting the country. I’m a simple man, I have one simple question. Give me one thing — just one — that Joe Biden has done to improve this country since he’s been in office. Can you guys give me one? 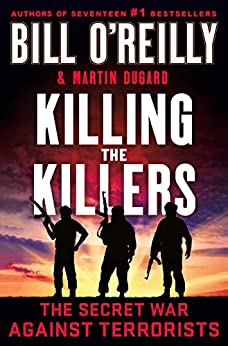 BUCK: No. We actually have talked about this. As much as we do a lot of talking, thinking, and maneuvering, this would be… I think the White House press secretary right now has one of the toughest jobs of anybody in mass communication, because there isn’t one thing. By the way, everybody, we’re speaking of Bill O’Reilly. He’s got a great new book out. You should all check out. Killing the Killers: The Secret War Against Terrorists.

Bill, we just had the former Trump acting CBP commissioner on, talking about the border, and everyone — and I’m in contact with some Border Patrol agents. I’ve been checking with them. I’ve been down the border a number of times. And they’re all saying, we’re going to see… It’s already happening. We have 15,000 or so in a caravan. We’ll see this summer, in terms of illegal crossings at the border, what will just blow the people’s minds. What is the Democrat plan on this?

Because most of the polling I see, shows that it’s usually a top five. Sometimes a top three issue, for likely voters.

O’REILLY: Yeah. The economy is number one, without a doubt. And that will mobilize people who usually don’t vote. So they’re mad because their expenses on everything have gone up. Gas and food, the top headline. The border is totally out of control, and even the Democrats wanted to control it right now, it’s almost too late. Even MSNBC breaks a story and says, “There’s so many migrants now standing on American soil, that a secret memo coming out of the White House says, ‘We have to fly these people in the middle of the night, all over the country, because we can’t process them here on the border.’”

I mean, this is just out of control. So the caravan, it’s going to be very difficult for the networks to avoid covering it. MSNBC will because that’s basically a cartoon now. But the other networks with the pictures of thousands of thousands of people marching up to the United States, and then clear-thinking Americans — you don’t have to be conservative, you can be liberal — you’re going, “What is this? Why can’t the federal government control the border?”

Well, the answer is, it could, if it wanted to. Because in the last year of Trump, he did. Remain in Mexico. Stop all this. And one of the themes of Killing the Killers — by the way, a great Father’s Day gift, if you like Dad. If you don’t like Dad, it keeps him quiet for a while. One of the themes is, that if the federal government wants to, it can do amazing things, like destroy overseas terrorism, which it largely has, in a coordinated effort.

Because we have unbelievable weapons systems now in space, thanks to Trump — $1.4 trillion went to the military. Where did much of that money go? To space weaponry, which is now used to wax ISIS, al-Qaeda, and other people, and we get into that in great detail. But if the federal government used its power on the border for now, it would have to move troops. The only thing it would stop it now is U.S. military on the border stopping this incursion, which is a national security threat, so it could be done.

BUCK: The book is Killing the Killers. Bill O’Reilly. Bill, thank you so much for being with us. Appreciate your time.

O’REILLY: Any time, guys! Thanks for having me.