Captain Sean Parnell: Blame the Suits, Not the Boots

BUCK: We have updates for you in real time here about the fall of Kabul to the Taliban — the fall of all of Afghanistan to the Talibs — and we’ve got our friend Sean Parnell joining us now. Sean is a former U.S. Army Airborne Ranger and New York Times best-selling author. He served in the 10th Mountain Division for six years, retired as a captain; received two Bronze Stars, one for valor and the Purple Heart. He’s a good friend of mine. Sean, thanks for being with us.

SEAN: Hey, how’s it going, Buck, Clay? Thanks for having me.

BUCK: So, Sean, tell us, man. What are your top-line thoughts?

SEAN: Buck, I’m crushed. I’m devastated. Twenty years in Afghanistan, so much blood spilled on that soil. Actually, as you know, I served there, I was wounded there, I watched my men do amazing things there. You know, we gave the Afghans a real shot at freedom only to have it squandered with a disastrous exit strategy from Joe Biden.

What strikes me the most — I think what concerns me the most — is that he seems wholly unengaged. Just put it simply, right? Here’s the situation in Afghanistan right now. Afghanistan has fallen. There are still thousands of Americans trapped behind enemy lines in Kabul, and the president of the United States, as of this moment, is still missing in action!

He’s addressing the nation at 3:45. But it’s taken him six days to even communicate anything about this crisis to the American people. My God! What a slap in the face to everybody that’s served in Afghanistan, every family member that knows someone who served in Afghanistan — or, God forbid, family members who’s lost someone there. It’s just an absolute tragedy, one strategic blunder after the next, Buck, and it’s just… It’s hard to wrap my mind around or just put words to how terrible the situation is.

CLAY: Sean, thanks for coming on? What happens now? We have now the idea of a country completely run by the Taliban. We’re out. Is this a danger zone now for Al-Qaeda or a successor terrorist organization to once again rise and begin to plot against American and Western interests?

SEAN: Well, the answer to that question is yes. But I will say that we’re not out yet, and one of the things that we need to focus on — what we need to be singularly focused on — is how do we get American citizens out of Afghanistan safely along with our allies? I’ll tell you this: Ceding Bagram air base is one of the greatest strategic blunders in the last century here for America.

That is one of the few air bases in Afghanistan where you can secure and evacuate people, one of the few landing strips where you can actually land a commercial airliner. There are only a couple of others. The Taliban control all of them! So let’s get our people out there, let’s figure out a way to vet refugees and bring ’em back here safely, and engage our allies so that they can maybe take up this cause and help us.

But it’s almost too late for anything else in Afghanistan. It’s just absolutely disgusts me that in Joe Biden’s first statement he found a way to blame President Trump. As someone who’s commanded soldiers and led soldiers in combat, commanders are responsible for everything that happens or fails to happen under their command.

Joe Biden is the commander-in-chief. Joe Biden owns this tragedy in Afghanistan, and he’s getting hit from both sides of the aisle on it as well. So it’s just heartbreaking to me to see what’s happening to American citizens in Afghanistan and our allies who fought so hard to keep that country safe.

BUCK: We’re speaking to Sean Parnell. He’s a former Army Airborne Ranger and New York Times best-selling author of Outlaw Platoon. Sean, it’s interesting because so many veterans that I speak to feel like the decision to leave — ’cause, remember, Trump did put us on a pathway to leaving. There was the negotiation with the Taliban.

And now the decision has been made and the execution of that by Joe Biden. But I’ve spoken to many veterans who say they wanted us to leave but they didn’t want it to be done in this way. And I wanted to pose that to you because I think that some people say, “Well, we can’t criticize what’s going on right now with the people running onto the tarmac at Kabul airport, and not be in favor of the continued presence, the so-called forever war.” How do you separate those two issues of ending the war but ending it the right way? 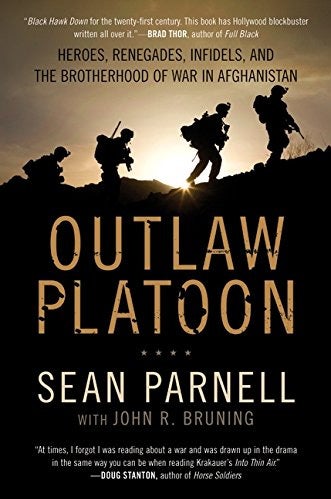 SEAN: Oh, I’m so glad that you brought that up because it’s such an important point. We spent 20 years in Afghanistan. I just turned 40 in July. I spent over my adult life in that country. It was definitely time to come home. And, as you mentioned, you talk to nine out of 10 veterans and they will tell you it was time to come home, but just not like this.

And there are so many differences, vast differences between the Biden plan and the Trump withdrawal plan. Trump was engaged with regional leaders. Joe Biden hasn’t even talked to Pakistan after seven months of being in office. Joe Biden moved the withdrawal date from May back to September 11th for strictly political reasons. That’s important, because it gave the Taliban the time and the space to consolidate and organize a counteroffensive.

I think the most important part of all is that President Trump’s plan was a conditions-based withdrawal, right? Where he was talking with leaders of the Afghan National Army and the Afghan command. Certain battlefield conditions needed to be met before moving on to the next stage. Joe Biden just cut sling load and ran in that country and then went on vacation and then failed to address the nation for six days. It’s just… It’s a borderline unforgivable tragedy that’s in Afghanistan all laid right at Joe Biden’s feet.

CLAY: Sean, as bad as this foreign policy disaster is — and I think there’s a strong argument it’s the worst foreign policy disaster in America in two generations — how does this impact Joe Biden’s domestic legacy and domestic goals, whether it’s his budget, whether it’s trying to respond to covid? When your “experts” are this wrong about what happened in Afghanistan, isn’t his overall legitimacy as a leader undermined in a massive way across everything he’s attempting, foreign and domestic?

SEAN: Absolutely, 100%. I think a lot of that is going to depend on how he handles this speech at 3:45, right? If he blames President Trump — even spends one millisecond of that speech blaming President Trump — then I believe that he will, as commander-in-chief, have lost the moral authority to lead in this country.

In times of crisis, I don’t care if you’re a Democrat or Republican, leaders lead. They don’t pass the buck, and they do everything that they can to bring this country together so that we can galvanize under one mission and get the mission done. And Joe Biden (sigh), if he blames President Trump at all, it’s gonna be very, very hard for him to lead this country thereafter.

CLAY: When you look for… You’ve talked about how much time you spent on the ground in Afghanistan, Sean. We’re taking calls from vets and we’re gonna continue to take calls throughout this program to allow them to have their voices heard given the sacrifices that they made overseas. You’ve said — and we’ll play a clip from you when we come back — “Blame the suits, not the boots for the Afghanistan failure.” How is this going to be remembered historically? For people out there who may not have followed this over the last 20 years categorize this for us from a military history perspective? What lessons have we learned, and what is the lasting legacy?

SEAN: Well, I’ll say this. This is such… A lesson that we can learn from Afghanistan is that when leaders in this country, whether they’re Democrats or Republicans, when they send our men and women into harm’s way, we have an absolute moral obligation in this country to win. Because if we don’t, then you’re gonna have an entire generation of Americans wondering what the heck they served for in the first place.

And in order to win, you have to have a clear-cut mission, you have to define what victory looks like, and you have to have end-state operations planned out. Truthful, I think we need to get back to declaring war in this country — we haven’t declared war since World War II — involve Congress more, get everything down on paper because when war is not declared and we’re not involving members of Congress, wars tend to go on forever, the mission constantly evolves, and that’s how we end up in a situation like we’re in Afghanistan right now where we’ve been there for 20 years and we’re wondering what the heck we have to show for it.

BUCK: Hey, Sean, it’s Buck. Before we let you go, I wanted you to take the chance here — because you’re speaking to people, as you know, across the country in all 50 states and a lot of them are your brothers and sisters who wore the uniform and fought and bled for this country, many of them lost friends and loved ones in the fight overseas, whether in Iraq or Afghanistan or in any of our GWOT hot spots. What do you want to say to those people, particularly who served in Afghanistan on this occasion, those who carried arms in the name of their nation over there. What do you want to say to them?

SEAN: Yeah, I want to tell you all that you served Afghanistan, “You gave the people of that country a shot to be free. You build schools for children. You helped little girls learn how to read. You built wells in villages and brought humanitarian assistance to people. You defeated the enemies of America at every turn. You were part of the greatest benevolent superpower the world has ever known.

“At your core, you’re a protector. Your service was worth it. You changed lives on the battlefield in Afghanistan. You made this country safer. You removed some of the worst of the worst terrorists the world has ever known. You accomplished every military mission set before you. The suits need to be blamed for this, not the boots. But we’re proud of your service. America’s proud of you. You should be proud too.”

There it is. Joe Biden’s Saigon. And on the heels of these remarks in July 2021:

BUCK: Sean Parnell, retired United States Army. And Sean, my friend, we appreciate you joining us here again, and we’ll have you back soon to talk about this as it evolves.

SEAN: All right. Thanks, Buck and Clay. Appreciate it.