BUCK: It is the chant heard in some parts around America these days, including allegedly on a Southwest Airlines flight that led a lot of blue check journos over the weekend to losing their minds. “Oh, my gosh, I’m unsafe!” they were saying. They always go to the safety argument. You say something a lib doesn’t like, their first thing is now, “Well, your speech, your thought that bothers me is violence.

“Therefore, I am justified in calling for the force of the state to have consequences against you, perhaps even the force of the state up to and including use of violence to silence you.” Never forget that part of the argument. They have completely abandoned any pretense of the First Amendment as a cultural and political phenomenon beyond just the basic protection given from government reach into your speech — although as we know, that’s not even sacrosanct.

The First Amendment was horrifically abused when it comes to the lockdowns and the way that we weren’t allowed to go to church. We weren’t allowed to gather outside, even. They would lock you up for that, lock you up for protesting lockdowns. Sometimes, though, the left has a very different feeling about you saying something on company time, in company uniform while being paid, right?

Now, the Southwest pilot, they obviously want him fired. They want him ruined, never able to work again. There were hundreds and hundreds of flights — American Airlines flights — canceled over the weekend. So we know there’s still something unresolved here, but that has more to do with vaccine mandates than what we’re talking about right now, which is the Joe Biden issue. There are people who think the Biden administration…

Although it ties into mandates, obviously. The Biden administration is flailing. Joe Biden is a preposterous president — really, a Trojan horse of a president. People are recognizing this increasingly as it goes along. Those who are open to having their minds changed are changing their minds about this president. And yet speech is allowable sometimes on the clock, not others.

A Southwest Airlines pilot… Again, we don’t know if he said it. He might have said, “Let’s go, Braves” or who knows. But it was reported on by the Associated Press that he did say it. That’s a big problem. But Colin Kaepernick, you will recall, he of the wearing socks with police pigs on them infamy — and the media was always very much in his corner and defending him and this was “about justice.”

Yeah, he’s so brave, so brave, stunning and brave. Here he is in a new Netflix special. We’re not saying… We’re not making an allusion or making a direct comparison. You can hear it in the video. The visual is even worse. This was in the actual Netflix special, comparing the NFL Draft to a slave auction. Play it.

KAEPERNICK: What they don’t want you to understand is what’s being established is a power dynamic. Before they put you on the field, teams poke, prod and examine you, searching for any defect that might affect your performance. No boundary respected. No dignity left intact. (sappy music) (mock slave auction)

BUCK: Clay, from the NFL Draft visually, you can kind of hear it in there, to a slave auction in a Netflix special. One of both the ugliest and craziest things I’ve seen in a mainstream media outlet in a long time.

CLAY: It is an insult to anyone with a functional brain to say in any way the NFL Combine, which is where everybody goes to work out as a measuring stick — white, black, Asian, and Hispanic, all football players. It’s an incredible honor to be invited to the Combine, guys oftentimes beg for Combine invites because they are effectively job interviews. And they’re job interviews for jobs that will pay you millions of dollars, and going to the Combine is voluntary.

Everyone just about who gets a Combine invite goes because these guys at 22 years old are going to make more money for a few years of football than many people will make in their entire careers of working. So the idea that you would equate slavery with probably the highest earning 22-year-olds almost anywhere in the world in the NFL, and the fact that you probably seen the video, the picture that went viral.

Tom Brady standing there shirtless in his underwear while they manage and check all the different sizes, everyone is treated the same, and it’s voluntary. And you mentioned that the pig socks for Colin Kaepernick. The analogy is amazing to even unpack further, Buck, because remember the day that he started his protest, he showed up in the post-game press conference in a Fidel Castro shirt.

He has praised Fidel Castro and Cuba. He has said that police… He didn’t just wear pig socks, Buck. He said police are “modern-day slave catchers,” direct quotes. This is a Netflix special. It’s written. It’s not like somebody just goes on television or radio and says something dumb. This is a written script — and remember, Kaepernick has spent the past several years criticizing the NFL for not allowing him to play.

So he is begging for the NFL to treat him like a slave? Colin Kaepernick — I want to be straightforward and honest and as transparent as I can be with everybody out there listening to right now — is an imbecile. And anyone who is supporting Colin Kaepernick in any way — and that includes Nike, Netflix, all these woke corporations that have paid him tens of millions of dollars — should be ashamed of themselves.

And even the Blue Check Brigade out there that has tried to defend Colin Kaepernick, I want to build on that Southwest analogy that we started a little bit earlier. They want right now a Southwest Airlines pilot fired for uttering potentially “Let’s go, Brandon” although he could have been saying let’s go Braves. In uniform, at work, they say that is acceptable. 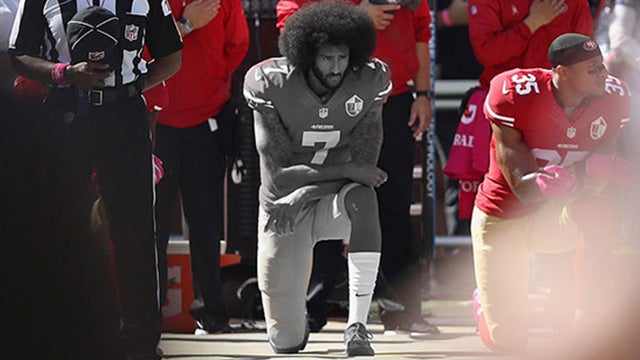 BUCK: Can we also just be clear that when you’re talking about NFL players kneeling during the anthem it really does upset and seems to represent people that are making decisions, right? When you have the players in the league doing that, people are gonna react to that. One pilot is not representative of Southwest Airlines.

Just the notion we’re comparing these things. There were lots of players taking knees in the NFL during the anthem, which people find highly disrespectful. Even Ruth Bader Ginsburg, ultraliberal, was like that is moronic and disrespectful to this country to do. It’s not the time for that. It’s like burning an American flag at someone’s funeral.

Okay, you can do it maybe legally be, although there’s a whole other conversation to be had about that. But that doesn’t mean it’s anything but disgusting, idiotic, and really just selfish. And that’s what you get with someone like Colin Kaepernick. He’s selfish but pretends to be about others, which is honestly a plague within the left these days.

They act like they’re big heroes, when all they’re actually doing… You see this with the climate change conference going on right now. Clay, how many people can arrive in private jets at a climate change conference to worship at the feet of an 18-year-old who didn’t even go to high school and knows nothing about science as though she’s some kind of high priestess of climate change before we realize these people are unserious on this issue and should be mocked and ridiculed, like Biden!

CLAY: And hypocrites like Colin Kaepernick because they are not able to even consistently make an argument, Buck. Even when it’s written, vetted, and part of a script, they end up with this absolute stupidity.