BUCK: We got our friend David Harsanyi with us now. He is a senior writer at National Review, got a perfectly timed book out, Eurotrash: Why America Must Reject the Failed Ideas of a Dying Continent. David, my friend, great to have you on.

HARSANYI: Thanks for having me. I appreciate it. 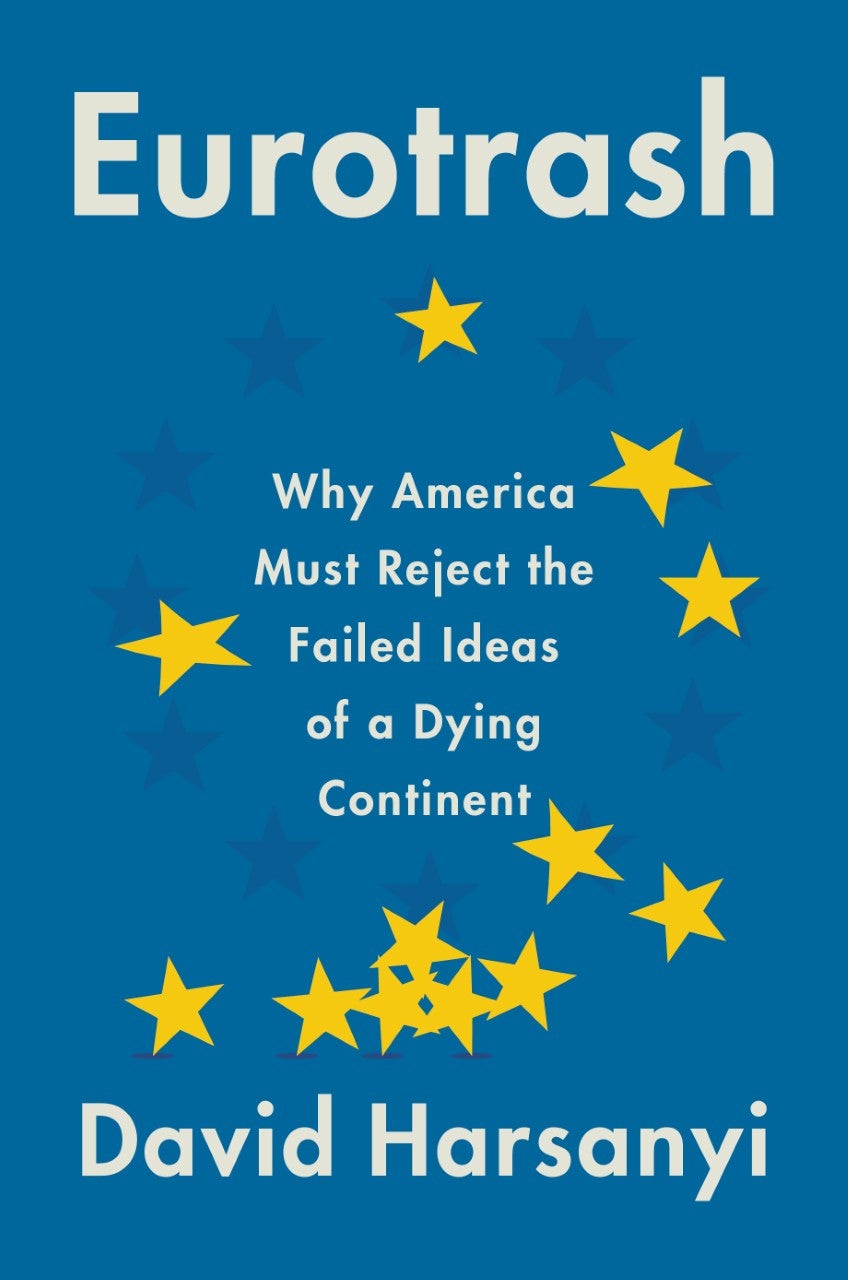 BUCK: So I have a feeling we have some idea about what’s gonna go on here. You have Biden with the fancy latte set talking about climate agenda and some other stuff. But as a part of all this, as a backdrop to this, why is it that Democrats are obsessed with getting approval from Europeans about our economic policies? I don’t think we have very much to learn from them and I get a sense that from this book you feel the same way.

HARSANYI: (chuckles) I do. One stat, a quick stat that really stands out is if Britain was a state in the United States, it would be the second poorest state per capita after Mississippi. It’s not as if these people are successful in ways that we are not or we need lessons from them. But I think that most Democrats, at least, they admire the technocratic institutions over in Europe that tell people how to act and what they can do.

The big welfare states which make people dependent on government and then that way, of course, controlling the citizens. So I think they admire that those sorts of things exist in Europe. The problem, of course, is it undermines entrepreneurship. It undermines creativity and all the things that make America better and more special than most European nations.

CLAY: It’s really a pretty… I’m blown away. It’s rare that we hear a stat on the show, and it takes my… It’s, like, amazing. That is wild about if Britain were a state, it would be the secondly poorest after Mississippi. It seems interesting, though, that Britain in many ways seems to have declared independence from the rest of Europe via Brexit and what the fallout is going to be there. How would you analyze that relationship and what it means for the United States relationship with different European countries based on what Britain is doing right now?

HARSANYI: Well, I mean, the British have always been a little bit different. They’ve always had a hard time assimilating into a bigger European (garbled cell) super state and many of our ideas, frankly, come from Britain, right? So I think that could have been somewhat more expected. But I don’t know that it changes much. They still have a very big bureaucracy. They still have dependency. They still have people voting…

Even their conservatives are what would be considered statist types. You know, it’s not as if… It’s really just Big Government parties fighting amongst each other. So I think that’s the problem. They have problem with assimilation as well, like other countries do. So as much as I admire the British ideals, I’m not sure it’s gonna change many of the dynamics in Europe. But I’m still happy they’re not part of (chuckles) the European Union, I guess. So that’s a plus.

BUCK: David, one thing that often comes up — and we got, as I said, Biden over there, and he’s doing the whole, “Oh, I’m so sorry” to Emmanuel Macron of France because of the nuclear submarine deal. The French thought they’d get billions of dollars out of this contract to provide subs to Australia, and they felt blindsided. So that’s coming up. A lot of climate change stuff going on, of course.

They’re gonna talk a lot about that, and no one actually does anything meaningful on it over in Europe, but they pretend. David, we often will hear, though, whenever they’re pushing socialism in America — this is what ends up happening — you’ll have a lot of smug leftists here say, “Oh, you mean that we’ll be like that terrible dystopian known as Sweden or Denmark?”

It’s more… Yes, okay, they have a large welfare state in those countries, but what is your response, when people just say that they want America to be Denmark, at least economically? What would the reality of that actually be? I mean, what are the parts of this that are left out of the discussion?

HARSANYI: First of all, the way that they paint Denmark, for instance — or even Sweden — is just untrue. It’s not a socialist state. They have turned towards… In the seventies, they became more socialistic but since then, that hasn’t been working. They’ve tried to become more like us. Denmark is a capitalist country with a massive welfare state, and the idea that we could scale that kind of welfare state here — and let’s face it, that’s what they want to do.

Whether it’s $3.5 trillion or $1.5 trillion, it’s just incrementally going towards that place. We can’t scale that kind of system. We would build a gigantic, centralized bureaucracy in Washington. It’s just not how this country’s supposed to be in the first place, and I’m not sure why we would want to be more like them. Their health care isn’t better than our health care. They claim it’s “free,” but of course (chuckles) everyone has to pay for that.

Another part of that that Bernie never mentions and others is that they pay 65% off the bat in taxation, off their income. It’s not like Democrats are trying to raise taxes on the middle class. They just want to take it from the rich. You can’t have that kind of system, and the Europeans don’t even try. So they’re worse — progressives here are in many ways are worse — than Europeans, ’cause they want to have this massive state but they don’t even want to pay for it.

CLAY: Fascinating that we just heard and have seen all the controversy surrounding the relationship with the United States and Australia and England over submarines. But it’s predicated, really, on China. Much of the United States’ relationship with Europe, at least since World War II, has been about protecting different parts of Europe primarily from the Soviet Union.

What is the relationship going forward, in your mind, going to look like as we move into, at a minimum, a new Cold War against China? Can Europe be mobilized to be strongly allied against China in the same way we all were against Russia and the Soviet Union, or is China gonna be able to pull apart some of those relationships by spending a lot of money in these different European countries and trying to buy allies in that respect? How do you see this new dynamic playing out?

HARSANYI: I just don’t think that European nations, Western European nations — or even Eastern, actually — see China as the same kind of threat that they saw from the Soviet Union or communism that was right on their doorstep. And, frankly, I don’t think… I mean, Donald Trump made a big deal about Germany not paying its fair share, which is a completely fair thing to say.

Even Barack Obama used to complain about that. They don’t. So not only are they trying to compete with us economically, but we pay for their safety generally. So, I don’t think that post-Cold War model works anymore, and I don’t think they view China as the same kind of threat as we do. Obviously, I think that our relationships and our focus have to shift towards China.

They are the real danger in many ways, and they’re a bigger danger in many ways because they’re also an economic power probably in the way the Soviet Union never was as far as a trade partner, et cetera. So I don’t think Europe’s gonna be on board with that with us. They’re not even on board against Russia these days. Germany wants us to pay for NATO, but then they have a pipeline to bring in natural gas and oil from Russia. (laughing) I just don’t understand how that relationship can remain the same way moving forward in the world.

BUCK: We’re speaking to David Harsanyi. He’s got a new book out Eurotrash: Why America Must Reject the Failed Ideas of a Dying Continent. And to that end, David, “a dying continent.” Liberals in this country — and I don’t even like that term for them, but we still use it. But the left in this country is obsessed with trying to turn us into some American version of a Western European or northern European state. Why is it a…? What are the failed ideas, and how is it “a dying continent” over there? Because I feel like these are… We always just think of charming cobblestone streets and the lattes and the free health care. It’s not that simple.

HARSANYI: They’re literally dying in the sense that they’re old. Germany, I think, is the second oldest advanced country. People don’t have children. So because we don’t have children, they let in a lot of immigrants. There’s nothing wrong with immigration, at least from my perspective. There’s something wrong with immigration without assimilation, and that’s what happened there. So, I mean…

And then you have other cultures who are integrating into society, and that creates other tensions like hyper-nationalistic sentiments, and it gets ugly. And that’s what’s happening now I think in Europe. But I’m also quick to say, I mean, listen. If we’re gonna be like Western Europe, it doesn’t mean that we’re gonna be a tyranny here or that, like, you know, we won’t have wealth. We’re gonna be wealthy. We’ll just be an insipid place.

The point of America is entrepreneurship, risk-taking, and basic freedoms that they mock when you talk about now on the left. But those are the things that matter. That’s what makes us different and special. That’s why people stream in here. That’s why they’re pressing against the border right now. No one is picking up a musket for the European Union.

People care about America for reasons beyond just wealth. And that, I think, is the biggest danger when you’re a giant bureaucracy. They crush that spirit. They crush local communities and that’s what’s happening in Europe. I just don’t think we should let that happen here. That’s the point of the book.

BUCK: The author is David Harsanyi. The book Eurotrash: Why America Must Reject the Failed Ideas of a Dying Continent. David, congrats, best of luck, thanks for coming on the show.

HARSANYI: Thanks for having me, guys.