Doocy Stumps Psaki: Has Biden Ever Been to the Border?

CLAY: Right now, the White House is having a press briefing, and Jen Psaki is up on the rostrum, and she was asked by Fox News’ own Peter Doocy, “Can you even remember any time that Joe Biden has been to the border?” as they discuss the crisis on the border right now.

DOOCY: Has President Biden ever been to the southern border?

PSAKI: In his life?

PSAKI: I will have to get (sputters) look back in my history books and check the times he’s been to the southern border.

DOOCY: We have been looking all morning, and we cannot find any record of him visiting the border as president, vice president, senator, or even as a concerned citizen. Why would that be?

PSAKI: I — I can check and see when the last time or when he may have been.

CLAY: So you’ve made it down.

BUCK: Not just a little bit. I’ve spent a week down there. I mean, I’ve spent time at the border, and I don’t run the country. But, you know, Clay, the thing about it is that, if they ask Biden, could he even remember? You have to wonder, if he had to go back in the memory banks about the border, would we trust the answer?

CLAY: Oh, we wouldn’t trust the answer at all. But the fact that he may… That’s great research by Peter Doocy and the Fox News team fhe fact that he may never have been to the border is in his entire political career. And, you know, that was clearly a question that Jen Psaki wasn’t expecting, and that’s pretty amazing.

We know Kamala’s been down to the border. She kind of did her photo-op. Mayorkas was down there this week. We played some of his audio. And people could say, “Well, why does it matter if the president is at the border or not?” Oftentimes presidential trips are symbolic because they give you a sense of what the president cares about.

It’s not as if Joe Biden’s gonna show up at the border and he’s gonna put on some bomber jacket and go put on some binoculars and look and be like, “Oh, we need to have better presence here, with everybody to have Predator drones!” No.

But it sends the message about what the federal government is going to focus on. It lets all the Border Patrol know, “Hey, the guy who’s ultimately in charge of policy cares deeply about what you are doing.” The fact that Joe Biden hasn’t taken the time or made the effort or had the energy to actually go to the border maybe in his entire career, is a pretty credible indictment of him.

BUCK: Well, remember when Kamala was faced with this? There’s some great Kamala moments already. Her staring into Lester Holt’s eyes and just saying, “I’ve been to the border” or “we’ve been to the border,” whatever that means, when she hadn’t, was one of the great Kamala moments ’cause she’s used to just getting away with saying whatever and the media just propping her up. 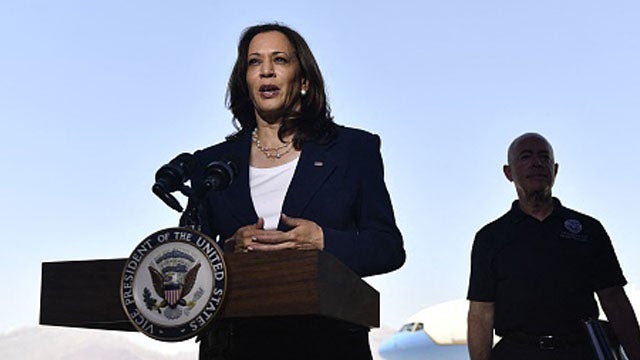 But, Clay, the problem with going and seeing and talking… There is no member of Border Patrol that you will find anywhere, there is nobody working this issue right now — the person does not exist — who will say, “This is not a crisis, we are not overwhelmed, and this is not,” and this is the part that really stings, “in direct response to what the Biden administration has decided at a policy level.” So it’s like you’re showing up to a place where you’re just… It would be like you and me showing up to a place full of male feminists and getting tomatoes even though at us. That’s no fun.