BUCK: We have Florida Surgeon General, Dr. Joseph Ladapo with us now. He’s got a book out, Transcend Fear: A Blueprint for Mindful Leadership in Public Health. It’s been out for a couple of months. Dr. Ladapo, honor to have you on, sir. Thanks for making time for us.

DR. LADAPO: Hey, thanks for having me on. Happy to be with you guys right before Thanksgiving.

BUCK: Yes, sir, and one thing we are not thankful for is Dr. Anthony Fauci’s leadership during the pandemic. 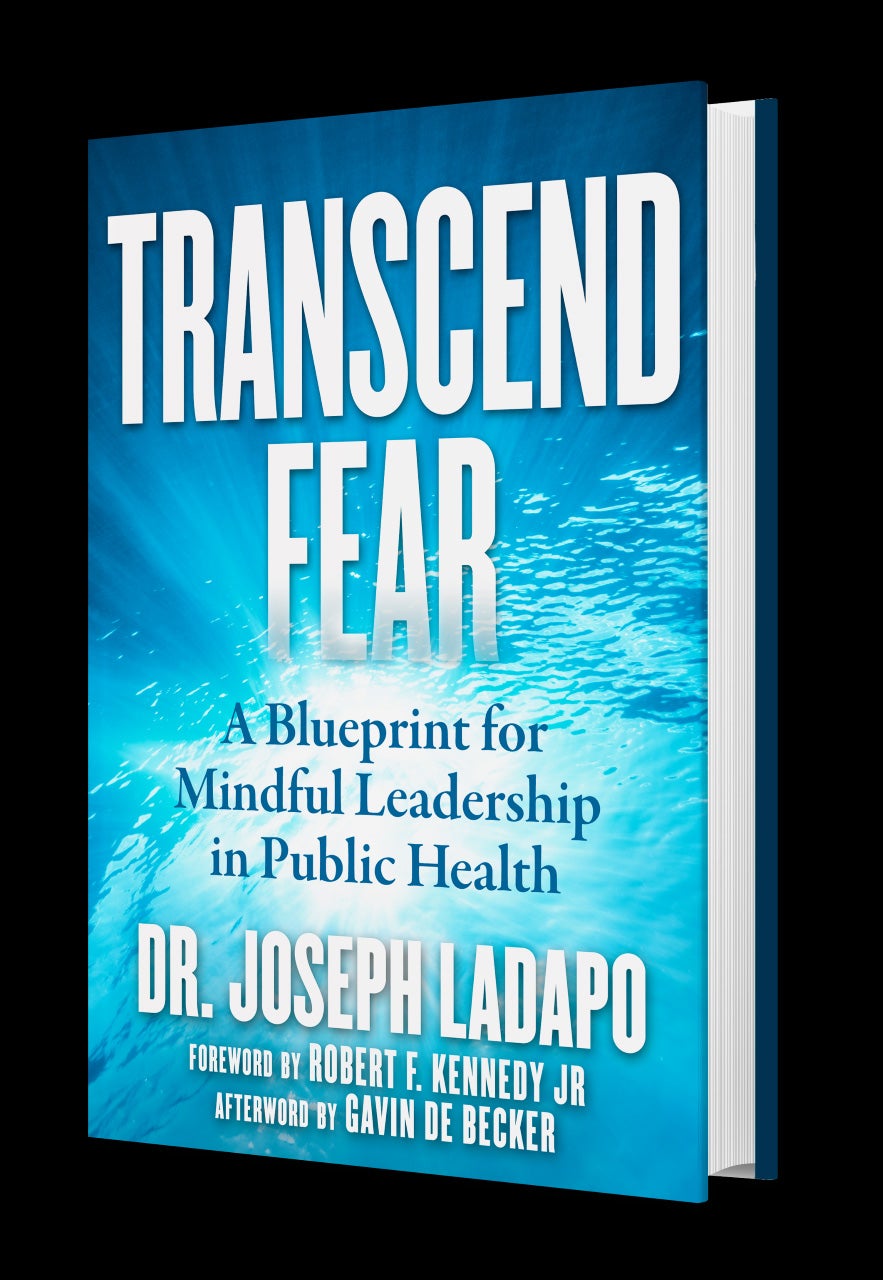 BUCK: You may have seen him giving his farewell speech of sorts today from the White House. What I mean is, you’re a Harvard-trained M.D. You are the surgeon general of the state of Florida. You’ve looked at the data for your state of over 20 million people extensively. When Dr. Fauci says that you should be proud to mask up when you walk into places, that people should consider masking, that they should all get the vaccine, that the vaccine will keep anyone from dying — and there’s a whole lot more we could say. What do you say as a medical professional?

DR. LADAPO: I say that I am stunned by Dr. Fauci’s inability to adapt to data. You know, in his comments he said something about how it’s too bad that people aren’t getting these covid-19 vaccines — for the people who aren’t, most people have — but for the people who aren’t. He hates to see them get infected. (laughs) Well, then he really ought not want them to get it because (laughing) as is very plainly clear, their protection from infection wanes rapidly. And that he’s still not acknowledging that and still playing mask charades, mask… I don’t know. Whatever this silly masquerade is with masks, it’s just a testament of why he cannot leave fast enough.

CLAY: Dr. Ladapo, appreciate you joining us. This is Clay. Dr. Fauci also said that he thinks people should test for covid before they get together with their friends and family for Thanksgiving. It is two days until Thanksgiving. I can guarantee you that the Travis family will not be testing before we have Thanksgiving dinner. You’ve got, I think, two kids, maybe three. Will the Ladapo family…? You are obviously an esteemed physician. Will you be doing covid tests before you sit down for Thanksgiving dinner?

DR. LADAPO: (laughing) The only thing that’s going to be tested this this week is going to be my patience, because our three boys are going to be running all around pumped full of yummy pumpkin pie from my wife and all that good stuff. You know, this it’s really sad. He has a right to believe that, of course. But it’s just a testament to how sad his vision of life is. You can’t just enjoy the beautiful time with people you love and care about. You have to think about testing and, what, maybe even masking or whatever else he’s suggesting before Thanksgiving? It’s sad. And yeah, I feel… In some ways, I feel bad for him that that’s how he sees Thanksgiving. I mean, it’s just sad.

Thanks for the love, Gov. It has been a privilege & pleasure to serve under your leadership. I have a feeling the best is yet to come😉

I look forward to continuing my service to the great people of Florida alongside my incredible team at @HealthyFla. https://t.co/HODdpijXjW

BUCK: Speaking to Florida Surgeon General, Dr. Ladapo, and his book is Transcend Fear: A Blueprint for Mindful Leadership in Public Health. Dr. Ladapo, have a lot of doctors come forward — I mean, I would assume it’s easier for them in Florida than it is in other places. I’m in Florida right now — and said that they’re going to stand against some of the madness, that that they’re not going to pretend like the establishment experts got everything right and that we should all still go into every hospital with a little cloth mask on all the time and all this stuff. I mean, have you seen a change in the mentality of a lot of your fellow physicians over, let’s say, the last year or so, as we’ve really seen everything that we were told by the Fauci apparatus and the Biden administration just not actually happen? I mean, everything fell apart.

DR. LADAPO: I’m going to give you what I think might be a surprising answer, and that answer is no, and the reason it’s no is because it’s not new. Most of the doctors over the past year who have opposed these policies, they haven’t changed. They’ve known that we’ve done many trials of masks, and they just have generally not been effective. They’ve known that the vaccines aren’t doing a good job at preventing infection, but they are afraid to speak because of the repercussions. And that’s really the issue. That’s what’s behind it. And there are consequences. And it’s it’s a very real thing.

You’ve got boards of medicine trying to strip doctors of their license, not because of anything they did with their clinical care, but because they said the quote-unquote “wrong thing” on Facebook or Twitter. And that’s the reality. That’s the reality that that physicians are living with. I’m sure you’re familiar with the California law that was passed restricting — essentially threatening to punish — doctors for saying the wrong things about one specific issue, which is covid-19. So unfortunately, no. People’s opinions haven’t changed. But even more unfortunately, a lot of doctors who are totally opposed to what Dr. Fauci has been saying are still afraid to speak up.

CLAY: Dr. Ladapo, I’m sure you have seen — speaking on that fear — California has tried to pass a law and you moved from California to the free state of Florida if I remember correctly. California is trying to pass a law that could create consequences for medical professionals who speak out against whatever the preferred science is at the moment. I’m just curious, in general. You probably remember when Fauci said, “I am the science.” Isn’t science about questioning everything? How quickly have we forgotten that that’s the primary goal of scientists is to rigorously question everything, lest you believe things that are untrue, and how scary is it that we’re trying to pass laws now to essentially keep medical professionals from ever questioning the consensus opinion?

DR. LADAPO: Well, it’s terrible. It’s terrible. And that is exactly… I mean, that is at the core of science, is asking questions and debating and bringing evidence and seeing how things shake out. Being curious. Those are core tenets of science and of the things that motivated people like me and many other people to pursue science. And unfortunately, what’s happening in California is they’re trying to rewrite reality to match their dystopian fantasy. And that’s essentially what’s happening. And hopefully, people will just realize that it’s total nonsense that they’re doing there.

BUCK: Speaking to Dr. Joseph Ladapo, surgeon general of the state of Florida. Dr. Ladapo If somebody was willing to…? Let’s say somebody out there thinks, you know, wearing two masks because Fauci says two masks are great; it’s going to keep them safe. But they’re at least willing to look at what data you have access to, say, when it came to mask mandates in schools. We’re two years into this. What could you point them to, what could you tell them about the real numbers that you saw in Florida during now two full years of data collection when it came to schools that required masks versus schools that did not?

DR. LADAPO: The Florida data has definitely been supportive of this, the fact that, in schools, these masks are doing basically nothing. And there are other studies. There’s a doctor in California, Dr. Tracy Hogg, that’s done a ton of research on masks. She’s debunked one of the CDC studies where the CDC reported that the masks were effective when they compared a couple school districts. But then she looked and found that basically actually, if you look further, they were only… It only looked that way because of the specific period of time that the CDC looked. Why did they look during that time only?

Who knows? It’s not that they were trying to put their finger on the scale, is it? So, it’s really nonsense. The air goes around, guys, if you’re in a room. Whether you wear the mask or not, the air is coming out and there’s even a randomized clinical trial that shows harms — believe it or not, harms — associated with cloth masks and health care workers. So it’s just a total barrel of nonsense, just complete nonsense, this mask obsession, and it cannot die soon enough. But unfortunately, many of my colleagues are trying to revive it this winter.

CLAY: Yeah. And so that’s the question that Buck and I have been asking. How does this end? And that’s the question we would ask Fauci if he would ever come on with us. You’re saying, hey, this this holiday season — I believe this is now the third Thanksgiving we’ve had, basically, since covid started, if I’m doing the math correctly — Fauci saying you still need to take a covid test. You should still be wearing masks.

If you’re doing this in year three of covid, how does it ever end? Will it ever end? And are you concerned — I think you are just based on the way that you answer that question, Dr. Ladapo — that we can’t just live and let live because the people who are still wearing masks, if they could, would demand that all of us wear masks, including 2- and 3-year-olds, the minute that they have the power to do so.

On a scientific basis, they are doing little to nothing. And then the second part is just deciding that you’re not going to participate in these charades. And that’s what needs to happen. And I think if enough of us do that, they’ll stop trying to work their — weasel their — way back in with their mask recommendations, which later become strong recommendations, which later become mandates, and all the nonsense that we’ve seen over the past two years.

BUCK: Florida Surgeon General, Dr. Ladapo, his book Transcend Fear: A Blueprint for Mindful Leadership in Public Health. Dr. Ladapo, thanks for being with us.

DR. LADAPO: Hey, thanks so much, guys. Happy Thanksgiving, guys.