CLAY: We are joined now by Brian Morgenstern. We were just talking about the hypocrisy out there from our good friend Dr. Fauci, and Brian has got a great book out. He was a former White House deputy press secretary. He’s the owner of Win the Future Strategies, and his book is out, Vignettes & Vino: Dinner Table Stories from the Trump White House with Recipes & Cocktail Pairings. Behind the scenes, Brian — I read this and I was like it doesn’t surprise me at all — Dr. Fauci actually mocked the stupidity of restaurant restrictions where you had to wear a mask until you sat down at your table? 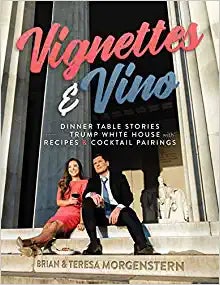 MORGENSTERN: Yes. Clay and Buck, it’s great to be with you. And, yes, of course, he did. My blood was boiling ’cause everyone was suffering from pandemic restriction. And of course people would walk into a restaurant wearing a mask and then sit down at the table and have a conversation and a whole meal with no mask on. Anyone with common sense knows that that was ridiculous, including Fauci because I was in a meeting with him when he commented on that and laughed about how ridiculous it was.

And behind the scenes he was laughing about how ridiculous his own comments were and how he could really just get everybody to believe anything this guy said. But he was wrong about everything over the course of the pandemic. The media painted this guy to be America’s doctor, but speaking for myself, I don’t want him to be my personal doctor, let alone the country’s doctor because he was wrong about every major thing throughout the pandemic.

BUCK: So, Brian, it’s Buck. You were obviously deputy press secretary, Trump White House. You’re there in the early stages of the pandemic, all this stuff is going on. For me the original sin of Fauciism was the flip-flop on masks, right? He initially is going, “Look, masks? Doesn’t really do anything. It might make people feel better,” and then all of a sudden, it’s just all these mask policies going in all across the country, the federal mask mandate on pipelines. Was there an awareness in the White House of that Fauci switch? Like, how did that actually come to be? And I also want to ask you, I was told… Who was it? Ah, senior White House official — can’t remember who it was now — who actually claimed that Dr. Birx was as bad as Fauci on the duplicity and all this stuff; so I want you to tackle both of those.

He was also wrong about:
1. severity of the virus
2. masks (against them before he was for them)
3. timing of vaccines
4. lockdowns (and suppressed dissent)
5. when Trump should be vaccinated
6. potential origin of virus
7. saying ‘Latinx’
8. being ‘silenced’ … while on tv https://t.co/uGgF03E75q

MORGENSTERN: So there was a sense that Fauci and Birx — both, actually — were really erring on the side of caution. That is the understatement of the century in terms of advocating for restrictive policies. And Scott Atlas, remember President Trump brought him onto the task force, he was the kind of voice who would say, “The cure can’t be worse than the disease.” There was an atmosphere in the country that covid was this unknown, silent killer and so we should be safe rather than sorry and so the kind of voices of caution won out at that time.

We knew that Fauci and Birx liked to get a lot of attention and in order to get a lot of attention they had to scare people and so they did that a lot. The sort of fine line we had to walk was let people know that President Trump was taking the pandemic seriously but, again that the cure can’t be worse than the disease. I don’t know if that kind of answered both of your questions in one statement, but I’m happy to take another swing at it.

CLAY: Yeah, Brian, obviously we know Fauci is a fraud, and we’ve been frustrated with him on this program for the entire length of the time that we’ve been on the air together and before that when we had solo shows, we were super frustrated with him. What was his overall vibe of Fauci behind the scenes in the White House? In other words, how much — you’ve told us that he would say things privately which were very different than what he would say publicly. How much of a difference was there in Fauci in public, in private, in general?

MORGENSTERN: So he was… The joke that we used to tell was we would refer to him as St. Anthony because of how he was portrayed in the media. But what we had learned in dealing with him was that he was really an egomaniac who was wrong a lot. And that’s very dangerous when you’re talking about science and medicine, of course. He was wrong about the severity of the virus. Early on he said it was not something people should worry about. He was for masks — or against masks before he was for them.

He said vaccines could not possibly be created in less than 18 months and we created them in nine months. We can argue about the efficacy, but the process of nine months. He was wrong by exactly 100%. He was wrong about when President Trump should be vaccinated because he had already had covid. I mean, I can go on and on. But he was not an easy person to deal with, of course. He’s the only person I ever encountered to use the term “Latinx” unironically. He would always talk about the vaccine studies and (impression), “We gotta get more Latinx in the studies, gotta have more Latinx!”

Fauci also disputes Biden: “We are not where we need to be if we’re going to be able to, quote, ‘live with the virus’.” pic.twitter.com/oXpA2RVB4w

CLAY: (laughing) That’s actually a perfect example of how left-wing he is, too, by the way.

BUCK: That’s also a Fauci that Brian pulled there. I’m feeling, you know, Brian’s giving a little competition. So, Brian, so Fauci was obviously… I mean, I joke around with people but I’m not really that joking. I don’t think anyone thinks Fauci’s worse than I do. Did Trump figure this out? Like, I mean, this is a… ‘Cause right now, you know, we support the big guy and there are a lot of things that he did that were fantastic. But he says, “I did the opposite of everything Fauci told me to do;” unfortunately, that’s not true. At what point did Trump realize this guy — meaning Fauci — is a problem?

MORGENSTERN: So there were comments that President Trump made that I think it leaked out. I think he was making them on a Tele-Town Hall with some donors at the time, if my memory serves. And he basically articulated the position that most of us had at that time. From a purely sort of campaign, public relations standpoint — and again walking that fine line of taking the virus seriously but also trying to do the right thing for the people and not having the cure be worse than the disease.

The president said, “I’m basically stuck between a rock and a hard place.” I’m paraphrasing. He said, “If I fire the guy, I pull him off TV, I take him away, then all of a sudden there’s this huge bomb that comes out about how I’m not trusting the science and all this, whereas if I just accuse let him run his mouth but then I also say my opinion, you know, at least it’s kind of equal.” Basically, he said, “We’re gonna have bombs thrown at us either way.” So sometimes in life you only have bad choices, and I would say that the way Fauci was propped up by the Democrats in the media left President Trump with only bad choices. It was either let him run his mouth and also counter him or fire him and have, you know, one giant explosion all at once.

CLAY: Brian, do you think Trump’s gonna run again? And how much do you think obviously the sort of legal troubles surrounding him impact whether he’s going to run again or not?

MORGENSTERN: So I would say, given what I have observed since the White House, he’s involved at every level, he’s got the most powerful endorsement, he’s still doing rallies, it seems to me more likely than not Trump ones. He also wants to counter those who are out to get him by saying, you know, this is for political purposes. I think they’re actually sort of baiting him into running. I think it’s more likely than not. The other side of the coin — which I think is, again, less than 50% — would be he says, “You know what? I’m having so much fun doing LIV golf, I’m having so much from now on in the private sector just kind of being a kingmaker living in paradise at Mar-a-Lago, why would I get back into politics? It’s such a nasty business.” So I think he’s weighing those things, but I would say more than 50% I think he runs.

BUCK: Brian, your book, Vignettes & Vino: Dinner Table Stories from the Trump White House with Recipes & Cocktail Pairings, quite a cocktail table book. Either give me a story, a recipe, or a cocktail pairing that 45 himself would approve of.

MORGENSTERN: Oh, my gosh. Well, okay. So first recipe, we all know he likes a nicely charred steak.

BUCK: Oh, my gosh! You went to well done steak, Brian? We may have to dump this audio. Go ahead.

MORGENSTERN: My steak recipe is not that.

MORGENSTERN: But it is a steak sandwich recipe that my wife came up that is thinly sliced, well seasoned. It’s got a delicious garlic aioli on it, served on… I think we have it on ciabatta with arugula on there. It’s absolutely delicious. It’s an honor of a story of when I was with President Trump in Bedminster. Of course, they make his favorite steak at Bedminster. I would say story? My first week at the White House was something I dealt with with Fauci. He got himself invited to throw out the first pitch for Major League Baseball.

When we were gonna have President Trump throw out the first pitch. But before they could announce it, Fauci, who’s friends with the Washington Nationals owners, got himself invited. So we had to come up with an alternate event which actually worked out great because we had Mariano Rivera with some Little Leaguers and we had ESPN and Barstool Sports there. And it was like a total home run of a day — sorry for the metaphor — it was actually outstanding. And the poetic justice is that when Fauci threw out the first pitch, other than Carly Rae Jepsen, it was the worst first pitch ever thrown.

CLAY: So wait. But Fauci stole the first pitch honors from Trump?

Dr. Fauci throwing out the first pitch as a symbol of our government’s prowess and capability to address #COVID19 and…. doh! pic.twitter.com/mPzaI06Xrl

MORGENSTERN: Guys, thanks for having me on. Good to chat.