Reminder that no one has yet figured out how to get them to stop doing the things that they do. No administration has yet been successful in getting North Korea to open up, to stop being the totalitarian nightmare that it is. We’ll spend more time on that in a moment, but Clay and I yesterday you were talking to you about General Milley, and this guy’s gotten a lot of attention because the Bob Woodward book that is out now.

Peril, I believe, it’s called. And see, here we are. You get the whole news cycle. You get everyone talking about this guy’s book. It’s amazing marketing. But he does have quite a scoop, and the scoop, if you recall, revolves around conversations between General Milley and the Chinese People’s Liberation Army equivalent, right? Their version of the chairman of the Joint Chiefs of Staff about how Donald Trump might be so outlandish, crazy, reckless, dangerous, that he would start a war with China.

But don’t worry, General Milley — and this is the part they always leave out. General Milley would reach out to China to say, “We’re gonna attack you or not gonna attack you, and you can trust me. Forget about what the commander-in-chief, Donald Trump, at the time may be saying.” Former secretary of state Mike Pompeo has taken a line that sounds very much in line with what we said here on the show yesterday, Clay, that the idea that there was a threat of war with China and Milley needed to even have this conversation is absurd.

POMPEO: All this has as a predicate, this idea that somehow there was this fear, there were cabinet members running around concerned that Donald Trump was gonna engage in some kind of rogue activity or some kind of act of war to sort of lash out. This never happened. It’s just patently absurd, and so the entire predicate for all of this assessment that Woodward has now laid out in his book, we’ll see what turns out. But make no mistake about it: During that entire time — the entire time I served, all four years — we conducted orderly foreign policy. We had a national security team that was working hard to make sure that we made the best decisions we possibly could. 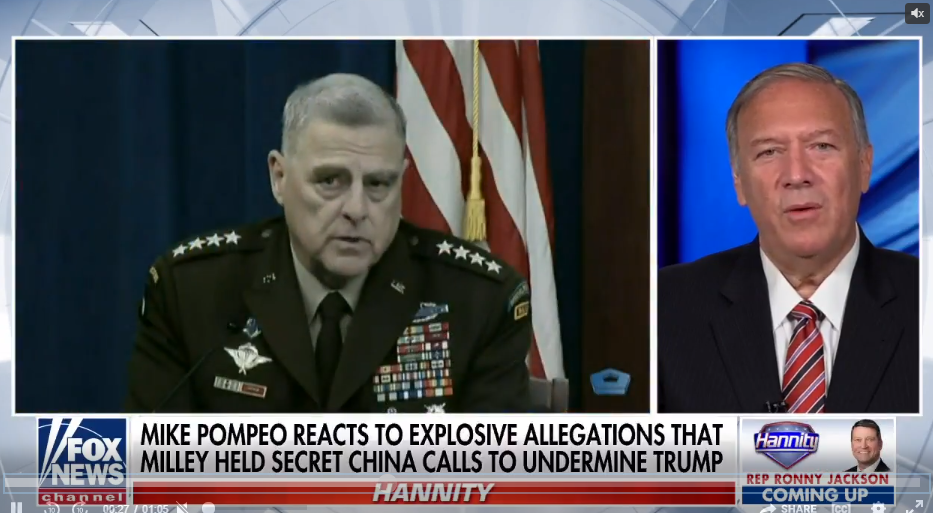 CLAY: This is… Look, I saw Senator Duckworth from Illinois come out and say effectively that she was troubled by this. She’s of course formerly in the military. And I don’t see how anyone can have heard these allegations, have read this story in any way, and not be troubled at the lightest level about it. And we really need — and we’ll talk to Ted Cruz about this because he has tweeted about this as well.

We’re gonna primarily focus on the border, but we’re gonna talk with Ted Cruz about this as well. Because General Milley needs to have to sit down in front of the Senate and answer questions about what he was doing and why he was doing it. Now, the Pentagon has tried to release a statement, Buck — we read it yesterday, I believe — saying that he did nothing improper.

But also, yesterday — and I’m surprised this didn’t get more attention, but I think it probably should have — the acting defense secretary said this was done without his knowledge, that it violated chain of command, and that General Milley should have to resign because of it. And remember, this doesn’t even need us to examine his disastrous management of what went on in Afghanistan.

This is totally separate from that but indicative of him violating what I think is the most sacrosanct prohibition that exists in the United States, which is the military exists at the command of the commander-in-chief, who is a civilian. And that is by design. And he directly challenged that by his actions.

BUCK: We saw with James Comey somebody who was a narcissistic, political actor posing as a guardian of the republic who was beyond reproach. And anybody who was suffering from Trump Derangement Syndrome saw that lanky weirdo for what he really was. But there are a lot of people bought into it because they hated Trump so much.

But remember his whole posturing initially before he was showing up at Democrat fundraisers — McCabe, too, by the way, his deputy. They were close buddies at the FBI. We figured out that that was a guy who was very partisan, wrapping himself in the cover of somebody who is actually just doing the job.

When you look at General Milley and some of the surrounding circumstances here, it increasingly looks like this is a guy who was in his heart, in his mind a partisan leftist. I mean, Clay, he apologized for appearing with President Trump in Lafayette Square back in June when the BLM riots were going on, and that was actually not a President Trump photo-op.

There was a full investigation. That was a lie by the media that they cleared the square so Trump could walk there and take a photo. That was not true. But Milley apologized for even being present. He has expressed public support for the Black Lives Matter protests/riots. Remember, those riots are good. The January 6 riot is bad.

He also, while there’s these long-established protocols about the nuclear chain of command, there are allegations made in the Wall Street Journal here that go through the book in detail that, Clay, he might have set up this special chain of command, that Milley might have done this after phone calls with Nancy Pelosi. Nancy Pelosi is not the commander-in-chief, thank God.

CLAY: (laughing) I’m just… Sorry. I’m just picturing Nancy Pelosi as a commander-in-chief and picturing her kneeling in the Ghanaian garb. What a joke she is. But, anyway, the General Milley focus here. I think, again, what is so amazing about this, Buck, is not only that he did it, but that either he or people close to him bragged that he did it to Bob Woodward. 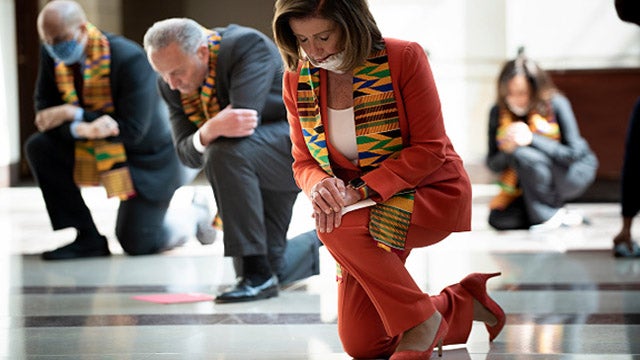 Like nobody would have even known that this happened. Not only did he potentially commit a court-martial offense, but he was so proud of doing it that he bragged about it. This is like you get away with a crime, right? If you’re a bank robber, you get away with robbing the bank and then you so want credit for the brilliance of your bank robbery that you then do an interview, so people know how you did the bank robbery. It’s really amazing levels of conceit and also believing that you are above the law and above your station in life and that your military oath doesn’t even matter.

BUCK: Right. Well, that’s what I wanted to add to here, Clay, and that’s the principles that are at work all the sudden disappear because it has to do with Trump, right? The Orange Man bad mentality overrides so many things. We would like to believe it wouldn’t override law enforcement, the Department of Justice at the highest level.

We saw that was not true with Comey and McCabe and other people who were, honestly, humiliated insofar as they violated the oath of their position, in some cases with actual sanction. Like McCabe, of course, was fired and Comey was fired. But we hoped that this would not have infected the military in this way. But Mike Pompeo, who is a veteran as well as being the former CIA director and former secretary of state made it very clear that this was in fact a usurpation.

POMPEO: Unconstitutional, incomprehensible, and completely out of line for any military leader, certainly someone who’s in the role that the chief of staff is in. You described it. Gregg Jarrett described it too. He’s simply an adviser. He’s not in the chain of command for operational activity. So this would be dangerous and usurpation of authority that is historically anomalous and we should make sure that we as quickly as we can figure out if General Milley spoke to Woodward himself.

We should find out if General Milley’s prepared to testify, we can do it tomorrow or the next day to get clarity about what General Milley said. I don’t know the DOD’s policy, Sean, exactly on whether there would be a transcript of this phone call, but I promise you there were no takers in the room. I am very confident that that conversation could be reconstructed. If you had a senior military leader who was simply an adviser.

BUCK: We need answers, man. You know, they hold hearings over things on Capitol Hill far less significant than whether the chairman of the Joint Chiefs of Staff created an extraconstitutional communication channel around the commander-in-chief having to do with a possible military or even nuclear first strike. That’s a big deal.

CLAY: Yeah. And again, I think the big deal that we talked about as this story emerged — and you know this better than most, having been in intelligence — is imagine how this back-channel conversation scrambles all Chinese analysis of American power and how that can then lead to a further miscalculation — or, heck, maybe it helps to explain the aggressiveness towards Hong Kong.

Maybe it helps to explain the aggressiveness towards Taiwan, is that we have so neutered ourselves and our own president in private conversations China that Chinese leadership knows that America doesn’t have the backbone to stand up to them at all, and certainly that’s the case with Joe Biden who, frankly, does he have the backbone to hardly stand up and answer 10 minutes of questions from the media without getting his mic cut off or without being told that he shouldn’t be doing it.