Governor Abbott Updates Us on the Situation at the Border

CLAY: We are joined now by Texas governor Greg Abbott. Governor, I appreciate you coming on with us. Watching Fox News in the last 15 minutes or so, they have live footage from inside of Mexico of massive caravans of illegal immigrants continuing to work their way toward the border.

Governor, I think a lot of people who are listening to us right now wish you were in charge of all the border between Mexico and the United States and all of the illegal crossings. What’s the latest you can tell us about that, and how can the state of Texas help to secure our border even if the president is asleep at the wheel and not doing it himself?

GOV. ABBOTT: Sure. Let me answer both of those questions. So these caravans that you’re talking about, this is something that we have had information about for several weeks now. And I had a meeting with the National Guard in general and the director of the Texas Department of Public Safety yesterday. I was in Laredo today, and I have been working with local officials up and down the border as we prepare for what may be this oncoming group of caravans.

I’ve never seen this. The reason I say “group” is because we have multiple reports about different caravans coming to different regions across the border. And so what we’re going to do in response to it as we are preparing as we speak, is exactly what you saw at the apex moment when people were coming across the river in Del Rio. And I’m gonna give you the words of the Border Patrol officers themselves.

Who, by the way, we work very closely with and I find despicable the attack on Border Patrol officers by the Biden administration is… You have the commander-in-chief attacking his own officers who are on the front lines doing their best to safeguard our border. It is wrong for the president to attack them.

That point aside, those Border Patrol officers said that the way in which the border was shut down in Del Rio — as you saw people walking across that dam coming from Mexico into the state of Texas — was the moment that Texas Department of Public Safety as well as Texas National Guard, they put all of their armed vehicles back-to-back-to-back-to-back.

And then had their officers on the border side of their vehicles, and they said at that moment, that is when people stopped coming across the border. My point in telling you that is, that is going to be part of a similar policy that we’ll use with regard to these other caravans that are coming toward the Mexico-Texas border. We need to obviously first identify the exact location.

Then second, we will identify where we will set up these barricades. And then we have some other strategies that we will be employing. One thing we have done in the state of Texas that’s different than has ever been done before and that is historically state law enforcement can make arrests of people who are coming across the border illegally.

And those are based upon the federal immigration laws, because it’s a violation of law when you do come across the border and we can legally make arrests of these people. But when we do so, we have to turn them over to federal officials which when Trump was present the federal officials would not use catch-and-release.

However, under the Biden presidency they use catch-and-release. Because of that, what Texas has done, we stepped up and created our own court system in south Texas where we are arresting and processing and then jailing people who are coming across the border for criminal trespass. Because I declared a disaster in this region along the border, it immediately elevates the time in jail and the penalties for trespass in the state of Texas and it turns it into a six-month to a year behind bar penalty.

And so we opened up thousands of jail cells where we now have more than a thousand people behind bars who crossed across the border illegally and trespass on areas in the state of Texas, and we arrested them for trespass.

And so we are using those strategies and more to make sure that we will be able to do a better job than even what Biden administration is doing to secure our border. Now, out of that is top of this multilayer strategy that we have because while we are doing all of that, we’ve also begun the process of building the Texas border wall.

All of this was capable because of funding provided by the state legislature where the state of Texas and Texas taxpayers themselves are coming up with three — not coming up with, they’ve allocated, they’ve provided to us, they’ve budgeted — $3 billion for Texas to be able to respond to this tidal wave of people coming across the border. Which, they would not be coming across the border in a tidal wave but for the fact that the Biden administration has implemented open border policies that are dangerous to our health, dangerous to our safety.

And, listen, I would be neglect full if I didn’t tell you something else that we’re working. And that is a month ago, we filed a lawsuit in a federal district court in Texas and got a judgment ruling in our favor by a federal district judge compelling the Biden administration to reinstate the Remain in Mexico policy. Even though a federal judge has ordered the Biden administration to do that, they have not complied with that federal court order.

So last Friday we went back to court urging the court to command and compel the Biden administration to follow the federal judge’s order. So we’re seeking that, and then in a separate proceeding we’re seeking the reinstatement and full application of Title 42, which is the policy that Trump put in place and where — because of the potential for people to bring covid into the United States — they need to prevent anybody from coming across the border.

BUCK: We’re speaking to Governor Abbott of Texas — and, Governor, I just want to ask you before we let you get back gubernatorial work. What exactly does the federal government, does the Biden administration do in response to any offers you’ve made to give additional resources? I mean, I know from speaking to Border Patrol in, say, Southern California along the U.S.-Mexico border that they feel that there is a state level government hostility in California to their work.

GOV. ABBOTT: Well, we need to separate terms here from the federal government, which I consider to be the Biden administration — 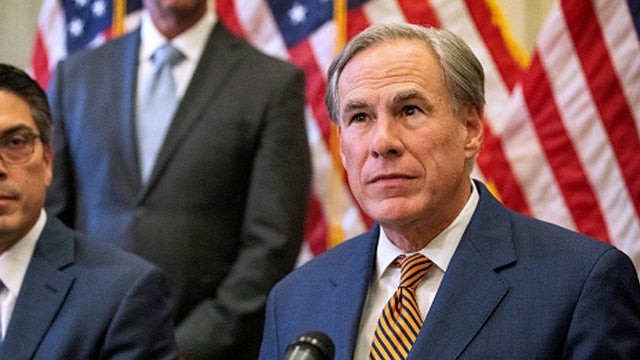 And the Border Patrol officers themselves were extremely collaboratively and supportive of both the Texas National Guard and Texas Department of Public Safety. The Biden administration separate from the Border Patrol, candidly, they have never even talked to us. Whether it be the president, the vice president, Mayorkas or any of them —

GOV. ABBOTT: — none of them ever talked to us. None offered my help or any assistance. They never even offered any challenge to us, which is good because it means we are able to step up and do more than has ever been done to put up forces, put up barriers to try to do everything possible to prevent these people from coming in. But this is a complete dereliction of duty by the Biden administration. They are acting contrary to the constitutional command for them to secure the border, and I hope Congress holds this administration accountable.

BUCK: Governor Abbott of Texas, we appreciate it. Thanks for being with us and breaking down what’s really happening at the border. We’ll talk to you soon.