He Tortured Puppies! Is Fauci’s Job Finally in Jeopardy?

BUCK: Let’s start, though, with the latest Fauciite madness. There’s a lot about Dr. Anthony Fauci that I don’t like. Clay and I talk about this with some regularity. There are things you can just not explain away. He’s lied to people in the past. He has lied about masks. He has been wrong many times. He’s clearly a partisan political player who pretends not to be. So there’s a lot about him that people don’t like.

But this! This connection may be just too much to bear, Clay. This may be the first time in a long time that Dr. Anthony Fauci’s job would seem to be in some degree of jeopardy — at least it could be theoretically — because of the outcry against it. He’s under fire, according to the Daily Mail here, over the White Coat Waste Project exposing a program…

Now, I’m just gonna give you the short version of this, everybody, and I’m just warning there should be a content warning ’cause I love dogs and I know this audience loves dogs. The N-I-A-I-D, NIAID, spent millions of dollars — this is Anthony Fauci’s organization — funding an experiment in Tunisia where they took beagle puppies, removed their vocal cords, and let sandflies eat their heads. They’re alive.

Members of Congress are asking for explanations of this. We’re gonna be getting more details, I would think, in the days ahead about this. Clay, this it seems to be finally a moment that’s too much for a lot of people, even though I know what Fauci’s gonna say. He didn’t know; he didn’t order it. Well, doesn’t the buck stop with Fauci? At what point can we say this guy needs to be aware of what the money that’s going to Wuhan, or aware of what the money that’s going to Tunisia is actually doing?

CLAY: Yeah. It’s interesting because it isn’t really connected to covid. And one of the truly remarkable things about Fauci’s career would be if he had to step down because of an experiment involving puppies that has nothing at all to do with covid — and that, frankly, he probably was not involved in micromanagement of. But I think it speaks to the overwhelming amount of anger that is starting to be provoked in many ways by Dr. Fauci.

And also the fact that he’s just being caught now by — even people who are middle-of-the-roaders — as someone who is speaking out on every different angle of every different story. For instance, Buck, this weekend on Friday he said, “Hey, you shouldn’t mix and match your vaccines.” In other words, if you got the Moderna, you shouldn’t get a Pfizer booster.

If you got Johnson & Johnson, you shouldn’t get whatever. Now on Sunday he came back, and he said, “Actually, you know what? Maybe mixing the boosters isn’t a bad move at all. You should be able to get whichever vaccine you want,” and when you define that… I know we’re gonna get into this in a little bit. But today, as we speak, Florida now has the lowest rate of infectious for covid of anywhere in the entire the United States, any state.

It is 50th out of 50 in the rate of covid, and so a lot of people are saying, “Wait a minute. Fauci is so outspoken about Florida this summer and what an awful job DeSantis was doing and how you had to have masks and how you had to have vaccine mandates, and Florida hasn’t done either of those things and the cases have all come down.”

I think, Buck, a big moment for Fauci where he really overextended himself happened and — bang, bang — in the early fall, when he said, “Hey, all these full college football and NFL stadiums, covid is gonna skyrocket all over the college football universe.” The number of cases have plummeted by a massive degree, and then when he said, “You’re not gonna be able to celebrate Christmas,” and then quickly drew back on it.

Not particularly partisan people, people who don’t look at everything through the prism of Democrat-Republican. We tried to talk about sane versus insane. A lot of people who are sane are now recognizing what you and I have been saying for a very long time and been accurate about: Dr. Fauci’s logic and analysis and leadership is a fundamental failure rooted in a failure of logic.

BUCK: I think people are recognizing the politics that are at work here too. I mean, Fauci, for example, is very certain when he says that it is impossible for the viruses research in the Wuhan lab to lead to covid-19. This is news to so many of the world class scientists who have come out in recent months, Clay, who have said, “No, the lab leak theory does seem to make a lot of sense.”

BUCK: But maybe Fauci’s saying that, well, the viruses that we were funding the study of couldn’t have been covid, but they still would be funding a lab that was involved in the study of viruses that eventually one of them became — you know — right? I mean, I feel like he’s parsing a little bit here. Play clip 6.

FAUCI: Unequivocally, anybody who knows anything about viral biology and phylogeny of viruses knows that it is molecularly impossible for those viruses that were worked on to turn into SARS-CoV-2 because they were distant enough molecularly that no matter what you did to them, they could never, ever become SARS-CoV-2. And yet when people talk about gain-of-function, they make that implication — which I think is unconscionable to do — to say, ‘Well, maybe that research led to SARS-CoV-2.” You can ask any person of good faith who’s a virologist and they will tell you absolutely clearly that that would be molecular impossible.

BUCK: So Fauci has completely disabused us all of the lab leak theory? That’s big breaking news. Clay, he’s so full of it. He’s such a little lab coat tyrant. I do think the thing that you’re bringing up, the “college football is gonna be a feast for covid” and “maybe you can’t do Christmas this year,” and now I would add to the list just the fact that NIAID is funding these puppy experiments.

This is now going into… When you put it in context of their funding, they did fund — NIH did fund — gain-of-function research in Wuhan. That has now been established as a fact. They look like they were funding the puppy thing. When you add all this together, you say, “What are the federal health bureaucrats doing? Do they have any accountability?” And how can Anthony Fauci now say no person of good faith effectively believes the lab leak theory anymore? When did that happen? Where’s that research?

CLAY: There are tons of people, Buck, who are acted in good faith and are eminently qualified to analyze the genesis of a new virus that are saying it’s like that this virus was created inside of a lab. So just because Fauci now comes out and says no one of good faith is making that argument, that’s a 100% lie. And I think this is the evidence of his starting to feel a lot of pressure all of a sudden.

It’s adding up for him. It’s layering on. And sometimes when you start to feel pressure, you start to make really bad statements. And I think he’s been garlanded, he’s been praised by the MSNBCs and the CNNs of the world, the New York Times and the Washington Post. They’ve done everything they could to try to keep this guy in the good graces, and I think the numbers are turning against him in a big way to the point where even the Biden White House might have to acknowledge that Fauci could be a negative for them.

BUCK: That’s the only time where Fauci goes. He’s never gonna resign, by the way. He’s a little megalomaniac on top of everything else. He’ll never resign. But if he becomes a political liability for the White House or if they’re able to essentially tie it off with Fauci and say, “All right, we’re gonna push him away now he’s done…” They’ll never say he’s done a bad job but they may decide he’s done enough. The whole situation is absurd. This was a guy who was running what Democrats said was the awful covid response under Trump. By the way, Trump listened to Fauci too much. 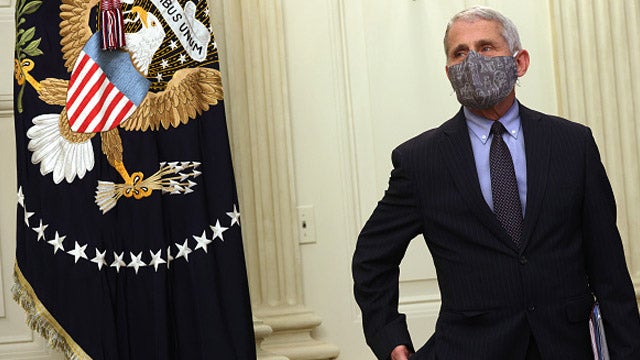 BUCK: I talked to the former president with this. He listened to Fauci more than he should have for longer than he should have, in my opinion. I think he would admit that now, by the way, for anybody who’s testy about it. And this guy kept his job — in fact, in a sense got elevated into the… This is like the general who’s losing the war under one president gets elevated to be, you know, the chairman of the Joint Chiefs of Staff in the next administration. Well, that actually does sound like something the Biden administration would do now that I think about it.

CLAY: Well, and the challenge here is to your point how do they get him off the stage? Because I think when they brought him back out to try to clean up the Christmas thing, he’s been, oh, avuncular Grandpa Joe, Anthony Fauci lately, right? He’s been telling everybody, “Oh, you need to go out and trick-or-treat.” Next thing you know, he’s gonna be on television breaking down what candies he likes the best.

Because they’re desperately trying to cancel out what has been a disastrous fall for Fauci and we just repeat this ’cause I think it’s significant. I think a lot of people say, “Holy cow, more people have died of covid in 2021 are Joe Biden in charge than died in all of 2020 in the United States of America.” So Biden said, “Hey, I’m gonna fix this; we’ll have no issues whatsoever.” He’s got more deaths on his watch than Trump did, and everybody talked about how awful Trump did. I think the Fauci mess with Biden deserves to be discussed as well.