ALI VELSHI: I want to be clear in how I characterize it. This was mostly a protest. It is not, generally speaking, unruly.

UNIDENTIFIED WOMAN: They are strictly principled anti-fascists, and they’ve taken a principled stand to stand against white supremacists and while nationalists wherever they may show up.

CHRIS CUOMO: I argue to you tonight all punches are not equal, morally.

NIKOLE HANNAH-JONES: Any reasonable person would say we shouldn’t be destroying other people’s property, but these are not reasonable times.

CHRIS CUOMO: And please show me where it says that protests are supposed to be polite and peaceful.

DON LEMON: Do not get twisted and think that, oh, this some — something that has not — never happened before and this — this is so terrible and where are we and these savages and all of that. This is how this country was started.

CHRIS CUOMO: Most of the major movements in American history have started at the grassroots level — and at some point, have turned into direct conflict with American government. So remember your history before you judge your present.

BUCK: Oh, we remember our history all right ’cause that was back in September of 2020, a number of prominent cable news anchors — in one case, a formerly prominent cable news anchor — telling you that looters are good, that peaceful protest is not necessary peaceful; sometimes you gotta punch people in the face if you don’t like their politics. You gotta burn down a few neighborhoods.

This is Democrat corporate media. These were multibillion-dollar media entities, and they were promoting and defending this stuff while cities were burning. Just want to have everybody be reminded of that. “Black Lives Matter…” This was a Daily Mail headline here: “Black Lives Matter is blamed for 32% spike in the murders of African-Americans in the wake of George Floyd’s killing as experts claim protests scared-off cops and worsened crime spiral.”

Clay, now, we’re actually looking at the results of the BLM movement and mobilization. This is also from this Daily Mail piece: “2,457 more blacks died in 2020 than the year before.” It wasn’t the pandemic, folks. BLM 2.0 and destruction of the criminal justice system, that’s what this was all about.

CLAY: This was a direct result — and we already knew, which is so frustrating — of the Ferguson Effect. We saw this in 2016. We knew it was real. I believe we have Heather Mac Donald now — and Heather, you’ve been fantastic on so many of these details. As the 2020 numbers have come out, have they surprised you by how many more people ended up dying in 2020 than in 2019? Is this what you anticipated? And I think significantly, are we getting better in 2021 in your mind and 2022 or are the numbers continuing to worsen?

MAC DONALD: No, I’m not surprised. I predicted this right after the George Floyd riots. I said, “We’re in store for either Ferguson Effect 2.0 or the Minneapolis Effect,” because the riots began in Minneapolis and spread across the country. Based on the lie that policing in this country is systematically racist, we saw the largest one-year increase in homicide in this nation’s history in 2020.

It was utterly predictable that the majority of victims would be black, that black lives would be taken at almost unprecedented rate. And, no, things have not gotten better 2021 and 2022 are worse. The anarchy we have… We have unleashed savagery upon the world. Children are getting killed overwhelmingly, of course, almost exclusively black children.

But we see now the carjackings spreading to suburbs, the looting, the inability to go into a drugstore and buy toothpaste because businesses would rather encumber their regular customers than arrest shoplifters and face charges of racism. So things are not getting better, and what it’s gonna take to make it better is to change the narrative and to reject the charge of police racism and criminal justice system racism. 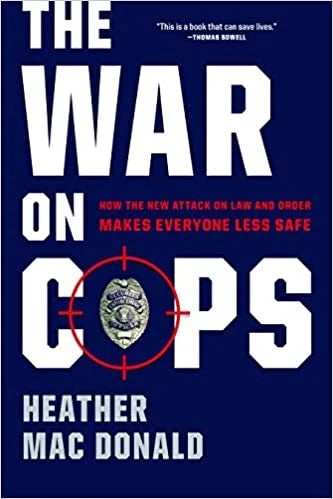 BUCK: We’re speaking to Heather Mac Donald, fellow at the Manhattan Institute and author of The War on Cops, a book I recommend to all of you listening. Heather, one of the defining characteristics, I’d say, of that moment in time which I remember very well — there was a riot in Manhattan that went right on to my own street. The next morning there were store windows shattered.

There was looting going on on the block where I live along with many others I know here in New York. So we remember that period quite well. While that was going on, some of the wealthiest companies, corporations in America were putting out, in some cases almost, like, laughable statements. If you had bought, you know, a bottle of baby formula from a company five years ago, all of a sudden you’re getting an email saying that this company stands with Black Lives Matter.

I mean, if you bought a cookie from somewhere, if you bought anything, you’re being told. Your dishwashing detergent company was telling you they stand with them. The corporate throwing in behind the BLM movement was really unlike anything we’d seen before. Do you think that they would just do that again, or is there a little hesitation now that we see the numbers are — BLM led to more violence, more lawlessness, and specifically more young black men killed in America than would have been in the year previous to the movement?

MAC DONALD: They would absolutely do it again. Look at what Disney is doing. It’s terrified of its own employees. The employees of corporations are getting more and more left as we graduate — belch forth — more and more college graduates who’ve been marinated in complete, fantastical lies about this country every year. And the fact of the matter is, the country has very weird attitudes towards race.

The elites purport to care about black lives. It’s all a crock. It’s completely absurd. It’s a fiction. It’s a fraud. The Black Lives Matter activism is an absolute fraud. There’s never been a Black Lives Matter activist who showed up at the scene of a child being gunned down in a drive-by shooting. Why? Because the elites are terrified about the breakdown in the inner city.

There is, frankly — let’s be honest — a pathological inner-city culture. What else explains these young teens willing knowingly spray bullets across sidewalks knowing that they are gonna take innocent lives. The family is broken down and America turns its eyes away and you have the elites that would rather accuse themselves of phantom racism than look head on at the problem of black, inner-city breakdown. There’s never been a civilization like this, and this type of weird cognitive dissonance means that we’re never gonna get out of this moment.

CLAY: Heather, what I’ve said for a while — and I think becomes more and more increasingly apparent as all of this data comes out and it’s mostly ignored — is really it’s not black lives matter. It’s black lives matter when white people are involved in killing black people, because otherwise black lives really don’t matter.

Which, you know, when you really consider it, it’s about how a black life is taken, not — and, by the way, a tiny minority of black lives are in any way connected to white people when it comes to murder. But that’s the only time the media covers it which, let’s be honest, Heather, is racist in itself because it’s really about the white person’s actions that is making it newsworthy.

The Justice Department would have snapped into its white supremacist, you know, the biggest threat to this country is white supremacist mode. Instead, at best we got a description of him as “dark-skinned.” A white would never be described as “light-skinned,” but generally there was utter mutinous. And of course meant that that shooting has been basically put down the memory hole because it doesn’t fit the narrative.

Anybody who’s had any connection with academia for the last 40 years knows that if you talk about black-on-black violence, that somehow that’s inappropriate and it’s just a fiction and crime is just a fiction. You’re not allowed to talk about black-on-black violence. But that is basically what the reality is today. Violent street crime, let’s be honest — and this is extraordinarily dangerous to say, but it — is overwhelmingly a product of underrepresented minorities.

In New York City, blacks and Hispanics account for virtually 100% of drive-by shootings. Blacks are 32% of the population in New York. They commit anywhere between 70 and 75% of our shootings each year. How do we know that? From the victims of and witnesses to those shootings who are themselves overwhelmingly black.

They are the ones telling the police who the assailants are. Whites are not the problem, and yet we keep on pretending in this society that it’s white people who are the scourge. No. It’s black criminals. And I have spoken to so many law-abiding, hardworking black residents of high-crime areas who only want to lead normal lives, and they’re begging for the police to enforce the laws against trespassing, against loitering, against literature, against drug use.

But the problem is, if the police enforce the law in a colorblind manner, in a constitutional manner, it will have a disparate impact on blacks. Why? Not because the law is racist, not because the police are racist, but because blacks commit crime at higher rates. That is the thing you are not allowed to talk about.

BUCK: Heather Mac Donald, author of The War on Cops. Heather, appreciate you being with us.

MAC DONALD: Thank you so much. Always great to be with you guys.