CLAY: We bring in now Ian Miller, who I found online because he does such incredible data analysis and graphs. He’s @ianmSC. I just tweeted out his handle. If you are active on social media, I encourage you to follow him. Ian, you take a great deal of glee in pointing out the absurdity of mask and vaccine mandates in terms of stopping the spread of covid in any way. When did you start to make these graphs, and how much viewership have your graphs gotten over time? Do you have any real idea? You’re doing the Lord’s work here in sharing this stuff. 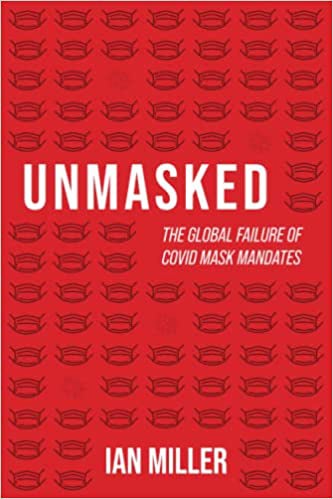 MILLER: Heh. Well, thank you very much. I started doing it I would say last summer is when it really took off. I know the numbers are pretty crazy. Twitter shows you the analytics — it’s tens of millions of views per month, which is fantastic — and I know it’s gotten into the hands of some very influential political people, leaders and politicians. So been very humbled and grateful that it’s done as well as it has.

BUCK: Ian, you’ve got this book out this week, Unmasked: The Global Failure of COVID Mask Mandates. That’s one of my favorite book titles I’ve been able to read out loud in a long time, because as I was just describing, I am an anti-masking fantastic. I think that this is insane and horrifying and it’s a mass hysteria and has been from the very beginning. What are some of…? As you know, this is still highly contentious.

And there are a lot of people who think of themselves as very smart — they’re not but — they have big perches in the media and in government who still take it as effectively settled science that mask mandates work. You’ve got this book Unmasked; you’re looking at all the data. Just give us some of your best stuff and what are some of your best punches at the Fauciite mask madness?

MILLER: Right. Well, I think one of the best examples is in California where you have a Los Angeles which has been as devoted to this as anybody. Los Angeles has essentially been under a mask mandate since April of 2020 and has some of the highest covid case rates in the world, death rates in the world as well. The L.A. County public health department just recently put out a press release saying that we’ve measured businesses, went around that have 95%-plus people were wearing masks.

Wonder why no one in the media’s asked him about it pic.twitter.com/HuUpVc2Pkz

And L.A. reported one of the high school individual case rates that we’ve seen anywhere in the United States recently so they’re measuring it as everybody’s wearing it, it’s still not working; the numbers are still skyrocketing through the roof. And there’s many examples of that. But that’s one of my favorites just because we know for a fact that everybody’s complying here in California and it’s not working.

CLAY: So if it’s not working, we saw in England — and you can say, “Well, it’s ’cause Boris Johnson is under a great deal of political pressure,” but it’s almost like that pressure gave him the confidence to finally do what the data has shown him for a long time, which is to eliminate their national mask mandate and also to eliminate their vaccine passports. The data is the exact same, if not more so, in the United States. When will any politician on the Democratic side of the aisle — in your opinion, based on what you are seeing — actually have the confidence to say anything similar to what Boris Johnson said?

MILLER: It’s a great question. I don’t know that it’s gonna happen anytime soon. You know, Jared Polis from Colorado was the closest, and he basically said, “Other states have done this’ we’re not seeing better results there.” It requires the willingness to kind of admit that everything they’ve been doing for the last two years didn’t work and never worked, and that is very tough for politicians to do. I think Boris Johnson had the…

You know, he was getting criticism from his own side of the aisle, and unfortunately Democrats are not criticizing each other. They’re not saying, “We should end mask mandates.” They’re just doing more of it. Now it’s we’re gonna send 400 million N95 masks out there, which will be just as useless as the other ones, and if you followed me on Twitter, I posted Germany already does this. They already have N95 mandates, and cases are at record highs right now. So I don’t know when that’s gonna happen. I hope it’s soon, but I don’t see it happening anytime soon right now.

BUCK: Ian, that’s very interesting because early on some of the mask studies, if anyone actually bothered to read studies that are on the CDC website and were peer-reviewed, control-studied mask situations, it showed that cloth masks are essentially — again, whether it’s measles or the flu, cloth masks are — a joke. They don’t really do anything.

But there was always this belief that N95 masks — because, unlike coth masks, at least the basic aerodynamics and mechanics of this might line up, right, that the opening in the mask fibers are small enough that a virus wouldn’t freely pass through it. But it sounds like what you’re telling me is that even in Germany where they did the N95 mask mandate upgrade, which is currently fashionable among Fauciites in America, that there was no discernible difference in caseload in Germany after the N95 masks? Is that right?

MILLER: That’s correct, and you can go and look. A couple of their provinces — sorry, states — already had N95 mandates and some only had surgical-grade mask mandates. The ones with the surgical mask mandates have done better than those with the N95 mandates. There’s just no difference, and we’ve seen this play out all over the world. But when you compare real world data and obviously a lot of these studies are very well done, but some are also just mechanistic lab studies where, “Oh, we think it might work in the lab,” but then when you get into the real world, if it’s not fitted properly, it’s still gonna have aerosols leaking out from the sides. So it’s not totally surprising, but in the real world they haven’t made any difference at all.

CLAY: We’re talking to Ian Miller. We encourage you to go check out his book, which is Unmasked: The Global Failure of COVID Mask Mandates. Also, you can check him out. Read his Substack, Unmasked, which is also fantastic. He’s @ianmSC on Twitter. So we know that we have failed. We know that many Western democracies have failed in our response to covid.

Who has done the best job? Which country based on…? You look at a lot of this data and analyze so many different countries. Based on what you’ve seen, who’s done the best job maintaining normalcy while still responding in some way to covid? What was the optimal-response country that you could point to?

MILLER: The obvious answer would be Sweden. I think that they’ve done the best job. They haven’t been perfect, and their leaders will tell you, “We made some mistakes early on with nursing homes.” But they never mandated masks, they never enforced mask usage, they didn’t have strict lockdowns. It was much more voluntary — some capacity limits, things like that. They tried as much to keep normal life going without making covid the sole focus of all of their policy.

For more than a year, Germany has reported more new COVID deaths per million than Sweden each day, despite endless media praise for N95’s, medical grade masking and strict vaccine passports for most businesses

I wonder why Sweden doesn’t get praised for having better results pic.twitter.com/USgVDVj7vr

And I think they’ve succeeded, and the results show that. I write about it in the book, but right now, I think they’re around 60th in the world in mortality rate, which is unexceptional. Countries that did lockdowns and mask mandates like Peru? Peru is the highest death rate in the world. So they’ve disrupted their social life, they disrupted their economic life — did all the mask mandates and the lockdowns — and had significantly worse results, whereas Sweden tried to avoid all that. They’ve really followed all the guidance pre-covid what they said to do, and it worked out just fine for them. They did just fine.

BUCK: I want to know something, Ian. Do you get a lot of…? You know, one of the things that’s been interesting for both Clay and me this entire pandemic are the doctors who will reach out behind the scenes and say, “I can’t say this publicly ’cause they’ll go after my license, or my hospital will take away my privileges and all this. But what you guys said about X or Y,” usually in criticism of Fauci, “is true, and a lot of our colleagues in the medical community know it’s true.”

I’m wondering what that’s been like for you as a guy who’s just very… You have this very direct approach of “the data,” you know, you’re just using the actual CDC numbers and data and letting people visualize it by putting out these graphs. Do you have a lot of medical people reaching out to you? And also, do you have people who reach out to you who are MDs, who say, “Wow, you know, now that I see this, mask really don’t do a damn thing”?

MILLER: Yeah. That has happened. It is surprising. And I think one thing people forget is that a lot of times doctors, they’re busy. They’re seeing patients. They’re working. They’re not really looking at a lot of the data. And a lot of times the doctors that we see on Twitter that are just kind of parroting the Fauci narrative. They’re just repeating what influential people are saying. They don’t really go and look at the actual research themselves very often.

So it has been gratifying to hear people that said, “I didn’t really look at this. I just kind of listened to what everybody else was saying. But now seeing it, I understand it’s not working and I’m trying to incorporate that into my own practice.” And I’ve had people reach out about contributing to lawsuits and things like that. Societies been really gratifying to hear from people and validating to hear that a lot of experts do agree with this, and they just can’t feel… They can’t speak out publicly for fear of retribution, which is just insane.

BUCK: Well, the book is Unmasked: The Global Failure of COVID Mask Mandates. I’m gonna get a copy and just keep it on my wall —

BUCK: Keep it right there, stare at it all the time, ’cause I hate he’s these mask mandates. Ian Miller, everybody, check him out, @ianmSC on Twitter. Ian, thank you so much.

BUCK: Rush, if we could have him from heaven now speak to all of us, he would say, "Serve my audience, guys, help save the country."

Watch Clay cover the infuriating details of what was clearly an epic failure of law enforcement in Uvalde, Texas.

LEO: He passed away a week ago, yesterday, actually, and it's the last great memory I have with him in giving him this letter.

GOV. DESANTIS: I was a good Division One player. I think I hit .336 my senior year. I was a four-year starter.

CLAY: I hope that everyone who made these 911 calls is still alive.