CLAY: It is a Friday Friends segment and we like to bring in people to interact with all of you that have been longtime friends of the show. And James Golden with us now. He has a new book out next month, Rush on the Radio: A Tribute From His Sidekick for 30 Years. James, thanks for coming. Thanks for joining us. Thanks for being such a huge part of this show’s history. What was the writing process for this book like for you as it pertains to going back over all those great memories?

JAMES: Difficult. And thank you so much for having me here. It’s kind of surreal. It was very difficult because it’s still hard for me and many of us that worked with Rush for so long to come to terms with the fact that, you know, Rush is gone to his reward for displaying such talent on loan from God for so long. So it brought back a lot of memories and some of it at times was funny, as you recall different things that happened over the course of the years. And, more importantly, there’s a sense for me, anyway, there’s a sense that, look, I had to get this right because I want this audience — Rush was insistent, he used to tell us all the time the show was the thing. He was always insistent on meeting the expectations of the audience. And those of us who worked with him shared that. We wanted to please Rush. We wanted to make sure we shared his passion for excellence. And so there’s a bit of a feel of pressure that has to be right, I gotta get this right, and so I hope it is, and I hope that the audience, this vast audience that Rush grew and that you’re now carrying on the legacy, will be pleased with the book. 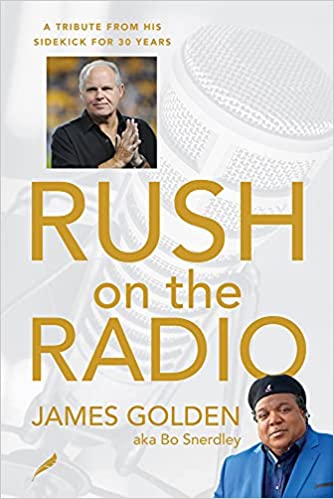 BUCK: Hey, James, it’s Buck. You know I appreciate all those times when you sat down with me and helped me prep to tie my first moments at the EIB mic over the years filling in for Rush. So, thank you for being the Obi-Wan Kenobi to my young Padawan or Luke Skywalker. I really do appreciate all those times. So, thank you for that. For anyone who doesn’t know if you would just tell folks how did you and Rush get linked up? I mean, how did this amazing duo come together and you were able to be such a longtime part of the EIB? Where did it all begin?

JAMES: It began in New York. I met Rush the very first day he came to New York. I wasn’t working on the show at that point. I met him outside of the ABC headquarters at 1330 Avenue of the Americas. He was with the then president of EFM Media, Ed McLaughlin. And I had known Ed, I had worked at WABC before; so I knew Ed. And I saw Ed outside with this guy and I walked over, said hello, and Ed introduced me to Rush Limbaugh. And when Rush began to talk about whether or not, they began to talk about what he was going to do, I remember saying to him, “Wow. You’re gonna be bigger than Paul Harvey.” And it turned out to be of course that Rush was unto himself the most successful radio broadcaster of our time. And not only a successful broadcaster, he changed the entire dynamic for the American media and on top of all that was just an incredible humanitarian and wonderful human being.

CLAY: It’s a great statement that you’re making here, James. I’m curious — obviously the book I would encourage people to go check it out, they’ll want to read it because they’ll learn so much, Rush on the Radio: A Tribute from His Sidekick for 30 Years. What do you think will most surprise people who have been longtime listeners of the radio show when they read your book?

JAMES: I don’t know whether they’ll be surprised, but they’ll learn, I think, a little bit more about some of the people. And I wish I could have mentioned every single person that worked on this show. And let me take the opportunity to do that right now. I felt very guilty over the years for receiving so much attention because, of course, I was in the studio with Rush most of those years. And Rush and I had an interaction. But any one of our staff, any single person on the Rush Limbaugh staff could have written this book, because Rush hired people that brought their A-game to the table every single day and then he left you alone to do your work. So every single person on this staff was just as committed to the Rush Limbaugh Show and was just as committed to Rush Limbaugh. We had an incredibly diverse staff which the left would never believe because, of course, they just caricature people and that’s it. They never do the investigation. But we had an incredibly diverse staff. We had a staff that was just in love with their boss.

Now, where do you find that? Most people came on to the Rush Limbaugh Show, and whatever point they came on, they didn’t leave. Most people on this show have been working here 20, 30 years or more. And it was because of who Rush was. It was because not only was he generous — I mean, we can focus on that — and, by the way, even now I learn stories about his generosity. I did the podcast series for iHeart and for Premiere Radio Networks on Rush’s life, and that podcast series we were learning even in hearing from people with different stories, and of course we ran across listeners, listeners to this show have their own stories about how Rush impacted their lives. 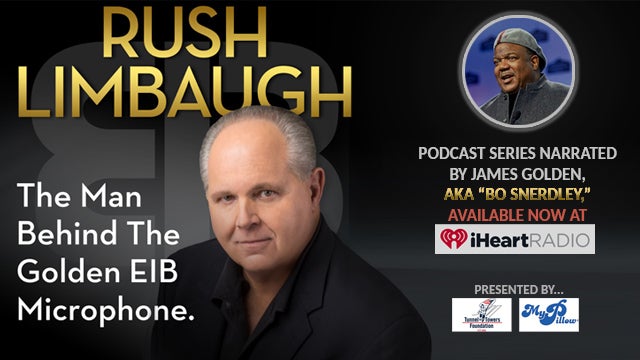 BUCK: We’re speaking to James Golden. He has a book out next month, Rush on the Radio: A Tribute from His Sidekick for 30 years. James, obviously for this audience you are known by Rush’s affectionate name for you, Bo Snerdley. What can you tell us about this? I think a lot of would be curious even if they were listening to the show for a long time, where did it come from?

JAMES: There have always been Snerdleys. The only thing is, no one remembers the other ones. Well, I’ll give you a hint. There was Marvin Snerdley. There was Mervin Snerdley. So my first day working with Rush — now, Rush and I had had interactions before, but I was rotated onto the show, and that was at 56 stations. That’s when there were just 56 stations. And the show grew like gangbusters to over, of course, 600. But so the very first day I walk in and I bring in my little stack of stuff for Rush, all the stories that I think he might be interested in, and he said to me, “Well, you know you have to be a Snerdley, right?”

“Yeah.” This was five minutes before he show.

“So which Snerdley do you want to be?”

Well, I looked down on the desk, this is back in the days when we actually had real newspapers, not online newspapers. And there was a copy of the Daily News among the assorted other newspapers on his desk, and this was flipped to the back page, the sports page, and Bo Jackson had done something or another that earned him the headline. I saw the name “Bo,” and that was it. Little did I know that 33 years later I would still be Bo, and it’s totally cool. I love it. And that’s how that happened.

CLAY: At least Bo Jackson’s one of the greatest athletes of all time. I mean, that’s not a bad motivation. When I hear your name, the first thing I would think of is Bo Jackson. So that makes complete connection for many people out there, I think.

BUCK: You know, James, Rush always said, “As long as I’m here, it doesn’t matter where ‘here’ is.” That saying for a lot of folks gonna ring a little different now, but the book you’ve written is a way of keeping him here, isn’t it? I mean, what do you want this audience to take from it, what do you want them to know about the man that so many people listening across the country right now remember listening to and having as a close friend and advocate, a confidant for in some cases 30 years?

JAMES: What I would like is for this just to be just the beginning for all of us. You know, Rush was to many of us a hero, and he will be a hero for the rest of our lives. He had a special place that no other broadcaster, no other media personality had because he transcended a person on the radio. He became part of your life. He became part of your family. He was part of your day, and what I want more than anything else is for this just to be the beginning. People in this audience have their own stories, and they should tell those stories. We should see movies. We should see people writing about Rush from now on because we have to define our heroes. We cannot let a hateful political left define who Rush Limbaugh is for history. It is our job to make sure that the proper story about who Rush Limbaugh is and what he achieved is told from this day forward. That’s our job.

BUCK: James Golden. The book is Rush on the Radio: A Tribute from His Sidekick for 30 Years. James, I appreciate you, Clay, the whole team here and everyone listening across the country, for all you’ve done and best of luck with the book. I’ll be getting a copy myself.

JAMES: Thank you so much. And again, such a pleasure to be here. Thank you.