BUCK: Welcome back. Clay and Buck here and it’s really Clay and Buck and Joe because we have Joe Concha with us now, not to be confused with Joe Biden, who is the topic of his latest book.

BUCK: Come on, Man! The Truth About Joe Biden’s Terrible, Horrible, No-Good, Very Bad Presidency. Well, Joe, the other Joe is not doing a good job. You wrote this book. What are you thinking?

CONCHA: I’m thinking that I look at the literary landscape, ’cause I’m scared; I’ve never written a book before and I’m writing about a sitting president. And the last president there were literally hundreds of books that were about him. 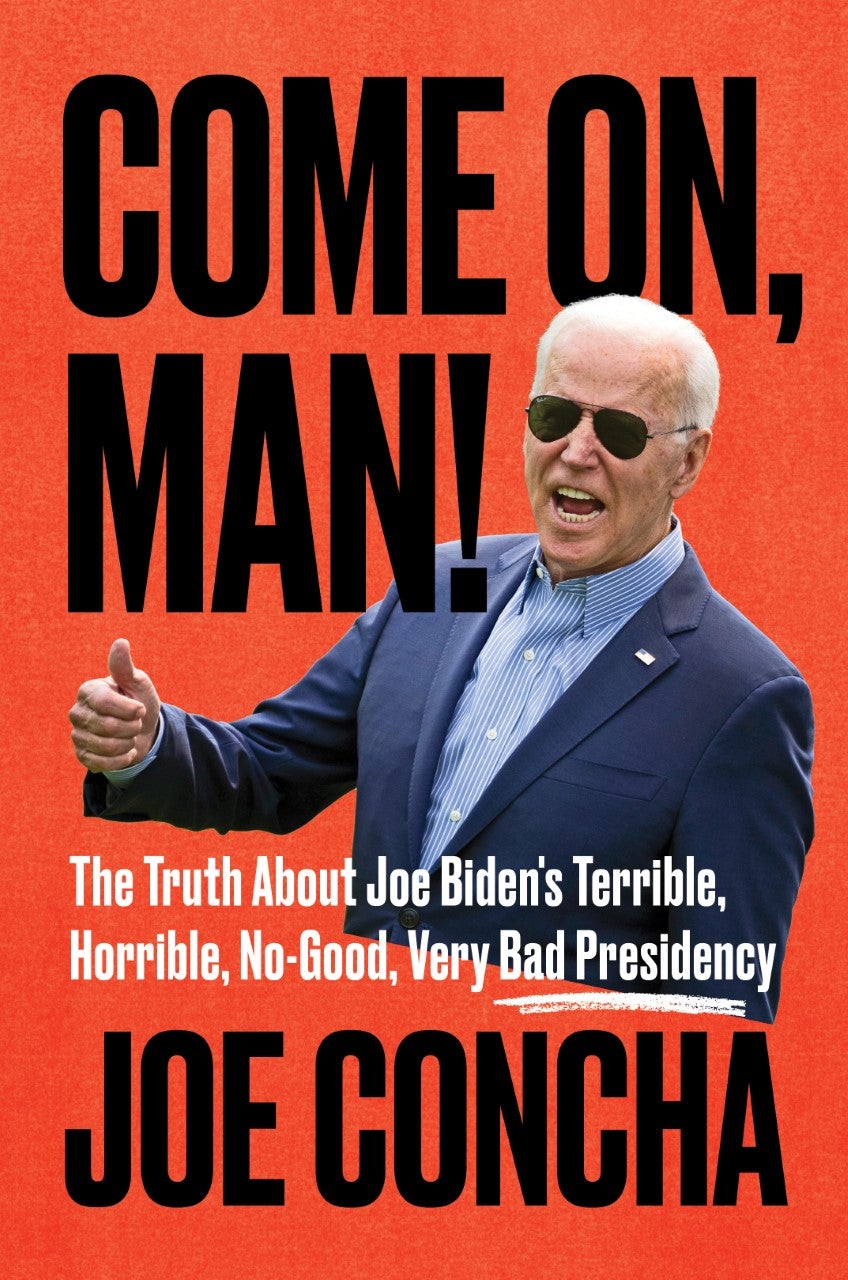 CONCHA: So am I going into a pool where there’s gonna be all these other journalists that talk about “speaking truth to power” and “holding the powerful accountable.” Well, it turns out that over… Starting last week going to the midterm for a six-week period there are 15 books coming out on the president, but not this president. Donald Trump. And there is exactly one book coming out on Joseph R. Biden, and you’re literally talking to the author of it.

BUCK: Wow. That kind of makes you the Biden expert among the literati, let’s be honest. Right? I mean, if this were a different administration, a different situation, the one guy who writes a book on the sitting president’s got a leg up, Clay.

CONCHA: It’s like the old saying Fox found it’s in each audience when it came into existence. Half the country.

CONCHA: So good, you guys can fight over that pie. I got half the lane right here.

CLAY: We knew Joe Biden was not gonna be good.

CLAY: Are even you surprised at how much of a disaster he’s been?

CONCHA: Only because he was labeled as a moderate –

CONCHA: — and then when you do research on this book, he has always been a far-left ideologue. And you remember back to Obamacare.

CONCHA: I mean, and he steps on the moment completely and taps Obama on the shoulder and says, “This is a big f—ing deal.” He was so happy that he expanded government, helped expand government more than any time in history and then you see him now. He’s no longer one of a hundred senators where you really don’t have a lot of power and vice president you almost have no power. But now that he’s president the plan is to spend trillions of dollars during a recession and then having the audacity to call it the Inflation Reduction Act which does not reduce inflation.

Then the border. Completely opened up. You’re looking at — when you include got-aways and then the people we actually document coming through — five million people coming into this country, guys, in the span of two years. That is equivalent to the population of freaking Ireland, all right? And if you’re saying that, ah, well, it’s just incompetency. Yes, it is incompetency, but how much of it is intentional when that many people come in, why is it happening? Because we are dealing with somebody who’s been this man all along and then you go through the grades: Inflation, F. Economy, F. Crime, F. Border, F. Education, F. I’m a parent of a person who is a third grader. Buck will be soon now that he’s finally hitched or about to be hitched.

BUCK: Yeah, about to be hitched. I’m working on it.

CONCHA: Right, right. And the kids will come fast and furious, believe me, you’ll be under a lot of pressure and you’re gonna care a lot about your kids’ education. I like parents’ rights over teachers’ unions and that is where this president is siding as well. So among every major answer, to answer your question in a very long way, even I’m surprised how poorly this president has gone.

BUCK: The book is out right now. It’s Come on, man. It’s by Joe Concha. You all know him from Fox News and from The Hill. How are the folks at The Hill doing, by the way? I’m a Hill alumni so everyone good down there?

CONCHA: Ever since you left, you know…

CONCHA: Krystal Ball left and then, you know, your replacement left and —

BUCK: We created superstars back there on Hill TV. I’m just saying. That was the way it went. So I’m glad it’s all working out well for those folks. Oh, one thing about Biden I think is so interesting too. You know, today — and Ron DeSantis is speaking right now. Our team is rolling on it. He’s giving updates on the damage across Florida and the latest here. So, we’ll come back with some of this here in a few moments, the key elements of the DeSantis update.

But, Joe Concha, Joe Biden, even when he was addressing everybody today about FEMA issues related to the federal response, he took this diversion — I noted it right as you said it — to say, “There better not be any profiteering over the gas stations’ oil prices!” And now you’ve just had the American Petroleum Institute effectively the oil and gas industry saying, “Hey, man, the price is a price! It’s a global marketplace, and it’s clear that Biden is just trying to push because he knows the price of gas hurts him politically.”’

CONCHA: In the book Come on, Man! We talk about how this is the Brian Williams presidency. Remember Brian Williams. “Ah, he’s in Iraq, he’s getting shot at in a helicopter! Oh, he’s in French Quarter during Katrina; he’s seeing bodies going down the road,” all made up under zero duress, by the way. He just told the story to tell the story. Joe Biden, when you go back — and I go back all the way to the beginning of this young adult life — has always been a compulsive liar.

CONCHA: Right? He ran for president in 1988 — this is 35 years ago — think about this — and he had to drop out. Why? Because of plagiarism. Even in the 2020 campaign he talks about going to South Africa and he got arrested trying to see Nelson Mandela.

CONCHA: I would think that senator in the United States got arrested in a foreign country you would probably have heard about it.

CONCHA: But he said it going into the South Carolina primary where the black vote is very, very important; so, he told the lie to advance his cause. I could go on and on. But this is a guy who says we’re at zero inflation; we’re at 8.5% inflation. He says we’re not in a recession when we have had two straight quarters of negative growth. He says that the border is closed when the border is not closed. He never speaks up about cashless bail laws when you have criminals going back out on the street committing crimes over and over again. So when he attacks the gas and oil companies, that’s because he has zero ability to take responsibility for himself. It’s Putin, it’s the gas and oil companies, not the fact that he keeps shutting down leases in the Gulf of Alaska.

BUCK: We’re here with Joe Concha whose book Come on, Man! About Joe Biden is out. It’s the only Biden book, he is America’s Biden expert right now, right?

BUCK: This is the way it goes.

CLAY: This is the question, right?

BUCK: Go ahead, Clay, you present it.

CLAY: Closing out the hour here, last question for you, will Joe Biden run in 2024? You are the expert. We have a steak bet on this. What do you think.

CONCHA: Come on, man. Absolutely not.

BUCK: I take it all back. He’s not the Biden expert.

CLAY: So how does it go? How does he announce that he’s not gonna run?

CONCHA: Loses in the midterms. Investigations open up into Hunter Biden. His party convinces him that, “Hey, you did your job, you got rid of Trump. Now we gotta bring in new blood.”

BUCK: Wow. They use Hunter as the lever to push him out? I thought they’d just start running stories about the dementia.

CONCHA: I think then once they start… Well, maybe that, but they’re gonna connect Hunter Biden to Joe Biden being the Big Guy who was like…

CLAY: I knew I’d like Joe. I knew this guy was brilliant.

BUCK: Okay, maybe we have to up the ante here. I’ll take both of you out to steak dinner if Biden does not end up running.

BUCK: Yeah, deal do Del Frisco’s. I’m telling you, they are reckless, ’cause who’s gonna step — who steps in if it’s not Biden?

CONCHA: I got the best news for you guys: 28 people are gonna run for the Democratic nomination as they did in 2020 and ratings for this show will go even higher than they already are, which is very, very high!