Julie Kelly: How the Left Is Weaponizing Jan. 6th

BUCK: Julie Kelly is with us now, senior contributor to American Greatness and author of January 6: How Democrats Used the Capitol Protest to Launch a War on Terror Against the Political Right, which is released this week. Julie, thanks so much.

KELLY: Hey, Buck and Clay. Thanks for having me on.

BUCK: I know I’ve talked to you before, Julie, about what’s been done to — just irrespective of the hyperbole and the craziness of how Democrats frame this issue, say it’s a “coup,” say it’s an “insurrection” — the Jan 6 defendants. What’s been done to them is appalling and just completely unbecoming of America, but just what is your view today from 30,000 feet, so to speak, as we’re being told that this goes down in infamy along the lines of Pearl Harbor and 9/11? 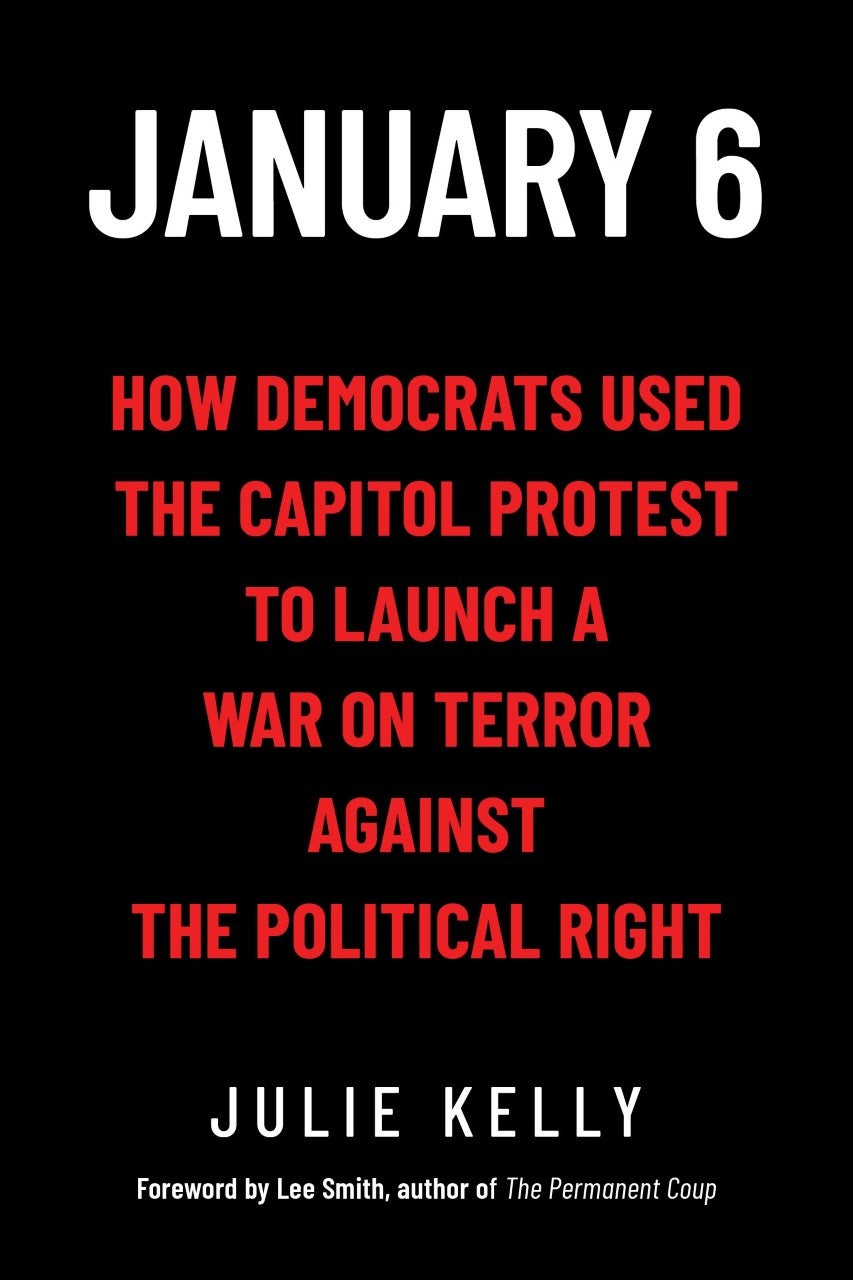 KELLY: Well, I think it speaks to the argument that I make in my book and that is that Democrats are using this four-hour disturbance a year ago — that in some instances turned violent — to launch this domestic War on Terror against the political right. And you see this not only in the Justice Department’s prosecution now with more than 700 Americans and counting, but you certainly see it with the January 6th Select Committee where they are targeting not just the president and Republican lawmakers but anyone — conservative influencer, anyone in that ecosystem from Fox News to podcasters or people like Steve Bannon.

So this is an orchestrated effort to criminalize political dissent, to criminalize political protest, and certainly, more importantly, to shut down any effort to shore up election laws in several states and tie anyone who wants to strengthen our election system and what we saw fall apart in 2020. Anyone who wants to tighten that up for the next election is, therefore, an insurrectionist. So you see that constantly, those two things tied together, and that’s really what the underlying motivation is here.

CLAY: Julie, when Buck and I watched this on January 6th, we knew, both of us, sending out tweets, this is going to be something — despite the entire summer of riots — that Democrats are going to try to put upon Republicans for as long as they possibly can. When you were watching January 6th happen, what were your thoughts, and did you already look ahead to what the future impact of this incident was going to be then, or has it surprised you the legacy of January 6th so far?

KELLY: It was totally sketchy to me from the beginning. I did not share a lot of people’s hand-wringing about what they were seeing. None of it made sense because no other rally or political event with Trump supporters had turned violent like this. So I think my antenna was up right away. I did not share, “This can’t happen. This is a horrible, dark day in our democracy.” It seemed to me like it was sort of staged to achieve a political goal.

It’s important to note that the Democrats are the ones who wanted to shut down what was happening in Congress that day, which was a coordination between Republican senators and congressmen who were disputing the results in six disputed states. And they were wanting to delay the certification, call for this 10-day audit. That looked like it actually was going to happen. So Democrats wanted the process shut down — and of course after this protest, riot, whatever you want to call it — that’s exactly what happened.

You had senators back off of their calls for audits to look at these contested states and so, of course, the results were certified 3 o’clock the next morning. And so that’s sort of where my reporting led me. What it looks like now a year later, more and more evidence that this was an inside job conducted by the government, D.C. police, Capitol Police — and certainly the FBI and DOJ — which seems to confirmed in the Newsweek that was published on Monday.

BUCK: We’re speaking to Julie Kelly, senior contribute to American Greatness and author of January 6: How Democrats Used the Capitol Protest to Launch a War on Terror Against the Political Right. Julie, the Jan 6 defendants, you’ve been trying to raise their plight and the just abject abuse they’ve been subjected to in pretrial detention. This is not people that have been convicted. This has been people — being held without trial for months on end. What can you tell us about what they’ve been subjected to, and what do people need to know about how really what seems like political prisoners are treated in America?

KELLY: Right. We do have a political prison, and that’s not hyperbole. There’s a political prison in the shadow of the Capitol Building in Washington, D.C., that is housing dozens of political protesters who dare to reject the outcome of the 2020 election. Right now, I think there are 40 or 50 men there. We have a total of 83 men who are being held under pretrial detention orders.

Now, this is a request made by Joe Biden’s Justice Department; these people are a threat to society because they were involved in the alleged, quote-unquote, “insurrection.” The overwhelming majority have no criminal record. Several are charged with no violent crime. But yet they are being denied bail by federal judges and D.C. district court, Trump-appointees all the way down to Reagan appointees denying them bail while their trials are delayed until the middle of next year. Some of these men don’t even have a trial date yet because DOJ keeps delaying discovery and trial dates. So they are political prisoners — there’s no question about it — and treated far differently than we see the activists and rioters from the summer of 2020.

CLAY: You all, that’s crazy to me — and I’m a lawyer, so I sit here and I’m thinking about this. Many of these… You said 83 of these prisoners, right? Many of them are potentially going to end up charged with crimes that could lead to less jail time than the time that they’re being held for right now.

CLAY: This is insane. Why is this not, in many ways, a bigger story? And again, I’ve paid attention to this a little bit. But I had no idea the number was as high as 83.

KELLY: That’s right. It’s 83 now. It’s been up to a hundred. Some of them have been released. Some of them, of course, are taking plea deals because they are desperate to get out of prison and go back home and try to rebuild their lives and take care of their families. So that’s really what this is about, Clay. This is not because — you know this as a lawyer — they’re a flight risk or they’re a danger to their community because they’re repeat offenders.

This is political punishment, and so this is what they are now using too as a cudgel to try to force plea deals out of the some of the nonviolent defendants, certainly. But let’s say one of them pleads guilty to obstruction of an official proceeding. This is the main felony that’s been applied to over 200 defendants. Well, one man pleaded guilty. He got 15 months in prison. You are gonna have someone like Tim Hale, who I know. I won’t get into the details of his case.

He’s charged with no violent crime. If he takes a plea deal and accepts obstruction of an official proceeding, he will have been in jail for the same amount of time as the other past sentences before he even had a chance to defend himself. So they’re using this to punish people, and of course, to try to pry plea deals out of the people who were charged early on. We’re talking January, February, and March of last year.

CLAY: Julie, who are these men’s attorneys? Again, we need to get, Buck, some of these attorneys on of these people because these stories I think need to be told on as big of a scale as we can. But are they having trouble getting high-end legal representation because of the political crimes that they are accused of, which we have seen happen to a large extent all the way up to the president of the United States at times, I mean, where big law firms are saying, “Hey, we won’t fight. We won’t represent you.”

KELLY: Well, that is a great point. Most of them — and, of course, almost all of them, as I said, have no criminal record. They’re not familiar. They’ve any been charged with crime before. So a lot of them saw early on, I can’t afford six-figures for a D.C. criminal attorney so a lot of them either have court appointed or public defenders. And some of these public defenders, as you can imagine, their political views are 180 degrees different than what their clients are.

KELLY: They have made that clear to them. Some cases, you have court appointed attorneys who have put these Trump supporters through reprogramming, forcing them to read books and watch movies that portray America as systemically racist and anti-Semitic. So I have reporting on that in my book. But early on, they had to have the public defenders. And even as some criminal defense attorneys started to step up, there was no money.

There’s no apparatus on the right to help anyone who was ensnared in this investigation. But there has been something set up, the Patriot Freedom Project that has raised several hundred thousand dollars so far to help hire good criminal defense attorneys out of D.C. and New York to help represent some of these clients. So things are looking a little bit better for them. But early on, the early several months of this people were completely subjected, they were just really victims of the —

CLAY: Can you say that one more time where people with donate money for people who may need attorneys? What’s that, the Patriot…? Say it one more time.

BUCK: Julie Kelly, senior contributor to American Greatness. Her book, January 6: How Democrats Used the Capitol Protest to Launch a War on Terror Against the Political Right is out this week. Julie, thank you for your work on this and for being here with us on the Clay and Buck show.

KELLY: Thank you so much for having me on. I really appreciate it.