BUCK: We have not forgotten here about the January 6th defendants and the right they have to be treated fairly under the Constitution, and not to be the tools of a politicized Biden DOJ. Julie Kelly is with us now. She’s a senior contributor to American Greatness and author of January 6: How Democrats Used the Capitol Protest to Launch a War on Terror Against the Political Right. Julie, thanks for joining us again.

KELLY: Hey, guys, thank you for having me on. Happy Friday.

BUCK: Happy Friday to you. Tell us, Julie, what is the status right now? We don’t hear much about January 6th defendants. How many are left, are some still in solitary, what have some of the sentences been like, and what are we expecting?

KELLY: Well, thank you so much for continuing to bring attention to this because it’s completely — almost completely — forgotten by Republican leadership with a few exceptions in Washington. Well, 850 Americans have been arrested so far in what the DOJ called the Capitol Breach Probe. They are arresting new people every week. Here we are more than 18 months later. Roughly 80 men are being held in pretrial detention orders. That means that the Justice Department is asking federal judges and the D.C. District Court to deny these people release based on the fact, as you just said, comparing them to 9/11 terrorists.

Many of them have been held for more than a year as the same DOJ delays their trials until later this year. In one situation, the Proud Boys — this alleged militia group, accused of no violence, by the way, on January 6th, no violent crime, no violent charges — some of these men have been held since February and March of 2021. Their trial just got moved to December, the end of December this year. That means these men will be held almost two years — not convicted of any crime, none of them has a criminal record — housed in jail awaiting trial simply due to their involvement in protesting Joe Biden’s election on January 6th.

CLAY: Julie, what’s wild about this — and thanks for coming on again — is some of these people are going to face less severe punishment, potentially, than what they’ve already been serving in time or prison, right, or jail?

CLAY: Just to kind of contextualize this, very few — you know this better than me, very few — of the January 6th defendants are getting more than a year in prison. In fact, the vast majority are getting far less perform some of these guys, as you just said, 80 of them, some of those guys, some of those 80 are going to be in prison for almost two years before they ever go on trial. I mean, this is this is pretty crazy stuff.

KELLY: It’s insane. It’s unconstitutional. It’s inhumane. These prosecutors and this D.C. U.S. attorney, Matthew Graves, who is the one driving this train, a Biden campaign adviser, his wife is a far-left radical activist, a women’s activist in Washington, D.C. They have open and public contempt, not just for Trump but for his voters. And so, you have political prisoners here in the United States. You have Biden’s DOJ punishing, prosecuting, and imprisoning people who protested his election. This is like banana republic-type stuff.

And what’s even more upsetting is these D.C. judges — Trump appointees believe it or not down to Reagan-appointed judges who are still on the court — who are going along with this Travis and holding these men, denying them bail, denying their release, denying motions to move trials out of Washington, D.C., because there is no way for these men — any of these defendants — to get a fair trial before a jury. We’ve already had six or seven jury trials. All guilty verdicts on every single count in record time.

One juror joked in one trial, “It took us longer to order lunch than it did to find this particular man guilty.” You know, they’re chomping at the bit to throw the book at these January 6th protesters and throw them in jail. Societies really a Travis. And, you know, there’s just… There’s no really legal way out for almost all of these defendants, which is why so many are pleading guilty, taking prison time, and trying to get it over with and get on with their lives that have been almost destroyed.

BUCK: We’re speaking to Julie Kelly, author of January 6: How Democrats Used the Capitol Protest to Launch a War on Terror Against the Political Right. Tell me more about this, the concept of the “War on Terror against the political right.” I mean, I think that this is something that people need to be mindful of because the Democrat media treats all of this stuff like it’s so normal. Meanwhile, there was a Trump administration lawyer who they just leaked the footage, I think, of him in his underwear during a raid —

BUCK: Early morning raid, they pulled this guy out of his home in his underwear all having to do with “the insurrection” and “the election” and all this other stuff. Speaking about Third World dictator style tactics, this is madness, Julie.

KELLY: It’s madness not only that Jeffrey Clark who is the man who subjected to the raid on his home early morning. This was last month. They searched his house for three and a half hours. They didn’t arrest him. He’s still now almost a month later faces no criminal charges but yet someone — probably in the Feds, DOJ, not the local Fairfax County Police Department — apparently was captured on someone’s — on the officer’s body cam, body camera, leaked it to CNN so they could plaster it on social media and try to humility Jeffrey Clark.

A DOJ attorney who did nothing more than write a letter, a draft letter asking Georgia to take a look at its election irregularities the 2020 election. He didn’t kill anyone. He didn’t kidnap anyone. He didn’t rob a bank. He wrote a letter, and they’re destroying this man’s life. He’s got four children. They’re humiliating him, bankrupting him, simply because he was part of trying to uncover what happened in that election.

And this has been happening to hundreds of Americans for now 18 months. These are horrific stories of what this FBI and DOJ are doing to people, now threatening some with life in prison if they don’t accept plea deals, threatening life in prison for the seditious conspiracy charge — a rare charge no American’s ever been convicted of, but nonetheless got 20 or-some-odd January 6th protesters who face this charge that the DOJ compares to treason and saying they will ask for life sentences if a D.C. jury convicts them on that charge.

CLAY: Julie, I donated money to help these guys have defense attorneys because a lot of them don’t have very good legal representation. If you’re part of our audience and you’re out there listening right now and you think it’s not American, regardless of your politics, to have 80 people behind bars like this for this long without being able to stand trial, what would you tell people they could do to help?

KELLY: Thanks for asking. So the fund is called Patriot Freedom Project, PatriotFreedomProject.com. This was started by the adoptive aunt of one of the detainees. There was no legal resources available to any of these people — and to the extent that lawyers were available, they wouldn’t touch these cases. So now we’re getting a little bit — she’s getting a little bit — more attention raising money.

This goes to help retain lawyers and also help these desperate families who are being bankrupted. People have been fired from their jobs simply for being charged with misdemeanors like parading in the Capitol. These people are pariahs in their communities, to their families. It’s really heartbreaking to hear some of what’s happened to some of these people. 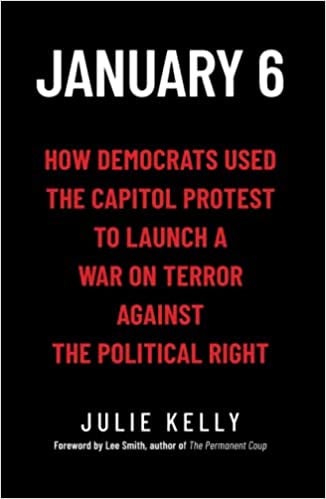 BUCK: Julie, I just have one more for you. Republican leadership. If you don’t want to shame those who are being cowards, maybe at least name those who do care about this issue. If we believe in the Constitution and due process and equal justice under the law, clearly that’s not happening here for these individuals, right?

There’s a difference between saying that what they did is all fine and saying, “Well, they deserve to be treated fairly and have their rights respected and misdemeanors shouldn’t get you locked up in solitary, for heaven’s sake.” Which Republican leaders, who among the Republican leadership is on this?

KELLY: Well, I’m not even gonna bother with the Senate. We’ve heard a few things here and there from Senator Cruz and Senator Cotton but nothing really about these detainees. House Republicans, there are a handful, luckily. Marjorie Taylor Greene, Louie Gohmert, Andy bigs, Matt Gaetz. They’ve actually visited “the D. C. Gulag,” I call it, the jail that’s holding at least four dozen of these men languishing in mostly solitary confinement conditions, being abused by prison guards. So that’s it.

Where’s our Republican leadership talking about this? Why are they not in front of this jail or in front of DOJ every single week screaming from the rafters threatening to cut off funding ’cause this DOJ, this FBI, this D.C .U.S. attorney’s office. Where is Kevin McCarthy, where’s Elise Stefanik, where’s Steve Scalise, where are heads of these committees that oversee this department? The silence is deafening. And I’ll tell you what. The base is very aware of this.

And they are not gonna let Republican leaders just wash their hands of this if they take control of Congress. There was an article in Axios that said the base wants blood, and that for sure because the base understands what’s happening, and they want retaliation and they want to expose what happened on January 6th, and they want justice for these people who have had their lives destroyed at the hands of this Biden, Garland, Matthew Graves, DOJ.

CLAY: Julie, we appreciate you coming on with us, sharing this story. I’d encourage you guys out there to join me in donating money to help these guys get the legal defense they deserve. Can you give us that website one more time?

KELLY: And thank you so much for that donation. PatriotFreedomProject.com.