BUCK: What happened in the last election? We have to know exactly what happened so that we can also prepare for this upcoming one. Were there any things that happened that were a violation of law or that were just unethical, unfair? I know a lot of people are shouting, “Yes!” Well, let’s get into the specifics of it. David Bossie, who is the president and chairman of conservative advocacy group Citizens United and was 2016 deputy campaign manager for Trump.

He has a new movie that just premiered yesterday, Rigged: The Zuckerberg Funded Plot to Defeat Donald Trump. We have the trailer up at ClayAndBuck.com right now… And one of the experts who appears in it is the former attorney general of the state of Virginia, Ken Cuccinelli, who is with us now. Ken, thanks for calling in.

CUCCINELLI: Hey, my pleasure. Always good to be with you guys.

BUCK: So, let’s start with just the overview here of this movie, seems to — The Zuckerberg Funded Plot to Defeat Donald Trump is in the title. What exactly did the CEO of Facebook do in the 2020 election? I mean, Rigged is the title, so obviously a lot of people are paying close attention.

CUCCINELLI: So, 2020 through two (audio drop) 501(c)(3)s, which most of us typically think of as charities, he funneled over $400 million to finance government election offices and his explanation was, “Well, we just want to help them do their job better.” Well, that’s just sweet, isn’t it? Except there were strings attached. Some of the strings were so substantial that literally their own personnel went in and ran election offices, for instance, in Wisconsin.

And so you literally had situations in densely populated Democrat areas — Philadelphia, Detroit; Madison, Wisconsin, other places — where offices were operating under the rules given to them by Mark Zuckerberg’s outfit, and those rules included what amounted to Democrat voter turnout. So instead of the government in these locations being a neutral arbiter, the analogy I would use was the basketball ref.

They were paid by one team to do their job the way that team told them to do it, and that included get-out-the-vote efforts which are absolutely fundamental for both parties in trying to win elections. And you had the government doing the Democrat Party’s job with the funding of Mark Zuckerberg. Clearly the numbers show it tilted the scales dramatically. You may recall that some people thought it was peculiar that Joe Biden beat Donald Trump at the same time Republicans picked up around a dozen House of Representatives seats.

Well, how does that happen? Because the “Zuckerbucks,” so-called, were concentrated in already Democrat areas. So they had already had Democrat congressmen. There was nothing to be gained by the Democrats in Congress by this spending, but there was in the presidential race. But in the other district where Zuckerbucks didn’t have an impact, Republicans actually beat the Democrats to an extraordinary degree from a historical standpoint.

CLAY: Ken, appreciate you coming on. Do we have any sense for what the plan is of Big Tech as we are now almost exactly seven months out from the midterms, is this almost exclusively a presidential-fueled move on the part of Big Tech, or do we anticipate something similar being brought to bear in terms of the midterms this year? 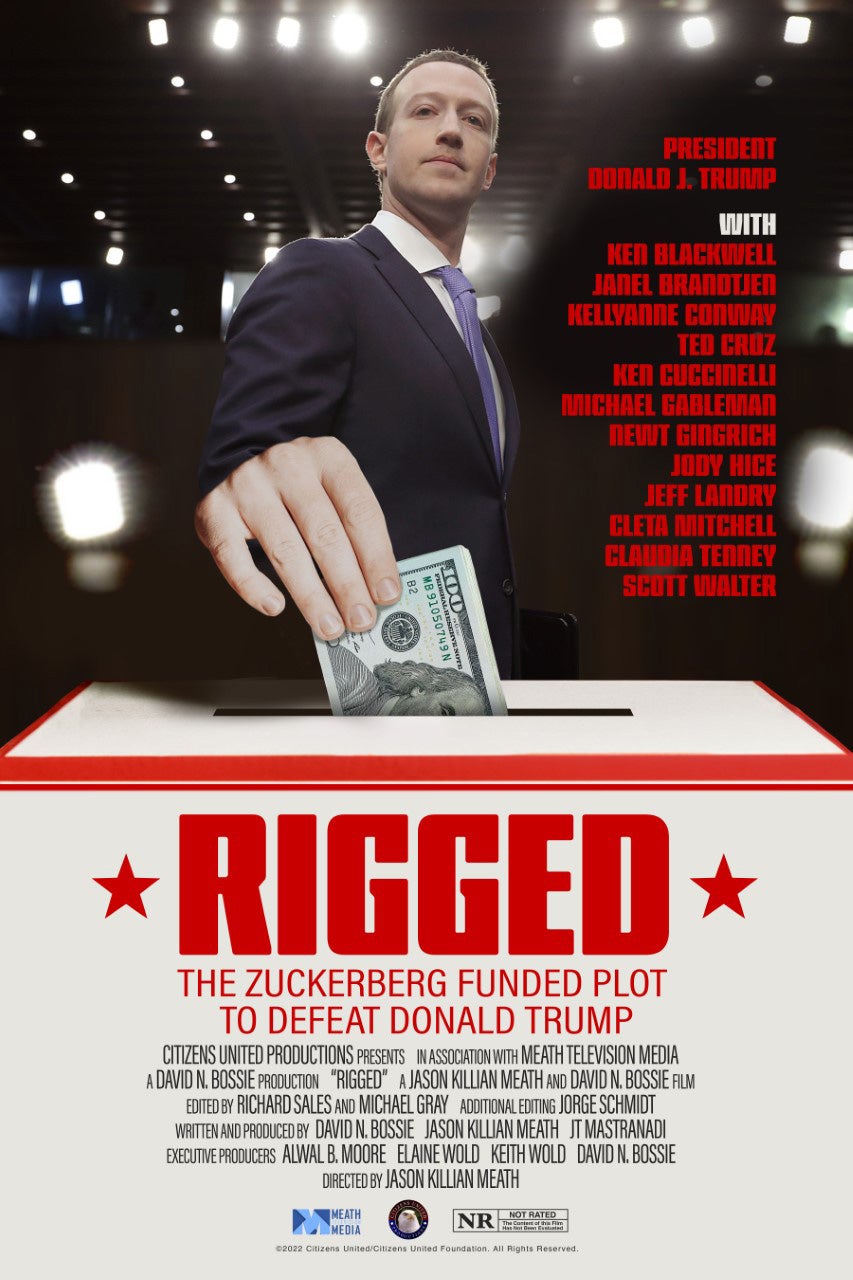 CUCCINELLI: So from the things we’ve learned so far, it’s pretty clear they thought this wouldn’t be discovered this quickly, that they would do this for several years before anybody figured it out. And, of course, it was figured out almost as it was happening, not fast enough to stop it. So thus far, about a third of the states have banned or severely limited the use of these kinds of grants — including on a bipartisan basis, by the way. Everybody recognizes how unfair this is.

And, you know, that leads to a lack of confidence in the outcome of the election because it looks and feels like cheating. There’s a reason they name the movie Rigged, because it was, and I think Steve Moore in the movie says they legally stole the election (chuckles), which is a clever way to say it. But steps have been taken and they’re continuing to be taken to make sure that the referees aren’t allowed to be bought again in the future and that government does have to play a neutral role, unlike what it did in many places in 2020.

BUCK: We’re speaking to Ken Cuccinelli, former attorney general of the state of Virginia, about the new movie just premiered yesterday, Rigged: The Zuckerberg Funded Plot to Defeat Donald Trump. That trailer is up at ClayAndBuck.com right now. If you check on it, you’ll see it right there. Ken, how are we looking, then, going into this midterm election where the polls are — and we try not to have too much early celebration on our minds here about it.

But the polls are looking disastrous for Democrats going into this midterm. But how are we doing? Democrats ant gonna go down without a fight, we know that, even if they fight dirty. They love fighting dirty. How are we doing with, you know, the mail-in balloting situation, drop boxes, people that are there to check and make sure that everything’s on the up and up at the voting centers? I mean, how are we prepared this time versus in the 2020 election? Have fixes been made?

CUCCINELLI: A lot of fixes have been made in a lot of states. I would say we have years of work ahead of us. If you think back to Bush v. Gore and what a disaster Florida was shown to be in that 2000 election, it wasn’t fraud. It was just incredible level of incompetence and inconsistency, and it took them years to clean that up — that’s just one state — including firing a lot of people that needed to be fired. But that’s a three, four, five-year undertaking.

So we’re in year two of trying to clean this up. And in Florida, it hadn’t become a political football. Everybody agreed Florida needed to be cleaned up. Now the Democrats — or at least the radical left part of the Democrats — treat election reform and transparency and security as (chuckles) an attack on them, because they want incoherence, they want incompetence. They can hide their fraud in it, and so they really don’t want it cleaned up so they can’t really say that.

So there is a fight over this. It has become a lot more partisan than it used to be. But down at the state level ,real progress is being made. As I told you, Zuckerbucks bans in Virginia and Kentucky, for instance, passed in the last month or two were done on a bipartisan basis. If you just put a random hundred Americans in a room and ask them the details about how to run an election, overwhelmingly we’d all agree with each other. This is common sense. It isn’t partisanship. But it’s become partisan because the radical left and their media allies have turned their attacks on effort to clean up elections because they think dirty elections advantage their side.

BUCK: The movie is Rigged: The Zuckerberg Funded Plot to Defeat Donald Trump… Ken Cuccinelli, sir, thanks for your work on this. We appreciate you joining us.

CUCCINELLI: My pleasure. Good to be with you.