Mike Pompeo Tells C&B: “I Don’t Believe I Have Anything Classified”

When I was on the House Intelligence Committee, no classified documents ever left the secure facility. Ever.

SEC. POMPEO: Oh, my goodness, what a mess. No, I don’t believe I have anything that’s classified. Anybody who has it, they should turn it back in. What a mess. Classified documents should stay in the places they’re supposed to be. And just as importantly, if it turns out that somehow, they got where they weren’t supposed to be, you should give them back. And then you should be as transparent as you can about how the heck it happened. By the way, you shouldn’t say you don’t have regrets. If someone showed up and had classified information in my home or near my Corvette, I promise you, I wouldn’t say I didn’t have any regrets. I would regret it deeply that I screwed up in that way.

BUCK: Secretary Pompeo, it’s Buck. I wanted to ask you about the reports on Abrams tanks possibly being provided to Ukraine by the U.S. A lot of the people you’re speaking to now, who are listening all across the country served in Iraq and Afghanistan. We’ve a lot of veterans in this audience, a lot of active-duty military. And I hear from them frequently about their concerns that we’re getting deeper and deeper into the Ukraine fight. One, do you think the Abrams tank should be provided? And then where would you draw the line on U.S. support for the fight against Russia?

SEC. POMPEO: Well, two things. I do think that that equipment should be provided if the Ukrainians can make use of it and it can help them push back against the invasion by Vladimir Putin. It’s in America’s best interest to do so. They haven’t asked for… To your point, I’m a veteran too. I served as a young soldier, on the then East German communist border. I worry about America getting too deeply involved but the best way to keep American soldiers from having to fight in Europe or to fight against Russia or China, any place, is to make sure that when an authoritarian invades a place like Ukraine and they haven’t asked the 82nd Airborne, they haven’t asked for a motorized rifle division, all they said is, “Can you send us stuff?” We ought to provide them with the stuff that we can that they can use, that they can be trained on that are actually going to deliver against the mission set. It’s the only way to end Putin’s invasion of Europe.

CLAY: Secretary Pompeo. A lot of talk lately about 2024. Who’s running, what the time frame is to run. If you are going to run for president, when would you announce? And are you exploring running for president now?

SEC. POMPEO: So, my wife and I are praying about it, trying to figure out if this is the next place for us to go serve. As for timeline, we kind of think late spring, early summer is probably when she and I will have to turn from prayer to action. And if we decide to get in, head to Iowa and South Carolina to make our case to the American people and, if not, find where it is we’ll next move if not in elected office? So, I was thinking about it.

CLAY: Yeah. So far, Donald Trump is in. Does that impact your thinking in any way, given that you were a secretary of state and served at the CIA under him? Or is it not even about who else is running from your determination?

It’s here! I’m so excited for you to read my new book. It reads like a thriller with stories from my heart. Make sure to grab your copy right now at https://t.co/eQ6tPwCDwF! pic.twitter.com/E2c7eojeZi

SEC. POMPEO: No, it has nothing to do with who else runs. Whether President Biden runs, former President Trump or whomever. In the end, you know, you must come to believe that this is the time and you have something that you can not only offer the American people in terms of a policy agenda that delivers good outcomes for them, but that you have the tenacity, the wherewithal, the capability to actually deliver on those promises. If you believe those two things. And it all works as a personal matter. You have an obligation to go make your case and then let the American people sort it all out.

BUCK: Speaking to Mike Pompeo, former CIA director, former secretary of state under Trump, and his book is out today. So, our timing here on Clay and Buck, as always, is excellent. Never Give an Inch is the book. And Secretary Pompeo, I got to ask you, because it’s always fun whenever I see a book come out from somebody on our side of things to see what the media focuses on right away. And they are drilling down into it. It’s all over Twitter, “Oh, my gosh, have you seen Mike Pompeo’s book?”, which I guess in a sense this is kind of an unintentional advertisement they are doing. “Have you seen his book Never Give an Inch because of what he says about the murdered journalist Jamal Khashoggi?” Well, Mr. Secretary, what did you say and why are they all so upset about it?

SEC. POMPEO: Oh, goodness. I don’t know. I don’t know what they’re so upset about. The Washington Post has had a discussion about this. When I was in office, we made very clear the murder of Jamal Khashoggi was nasty, it was heinous. We sanctioned 13 Saudis for what they did. But we also knew that that person’s life wasn’t more important than the lives of American soldiers who are protecting us. And we weren’t about to give up the partnership with the Kingdom of Saudi Arabia that was helping us keep the American economy going and keeping American security going. 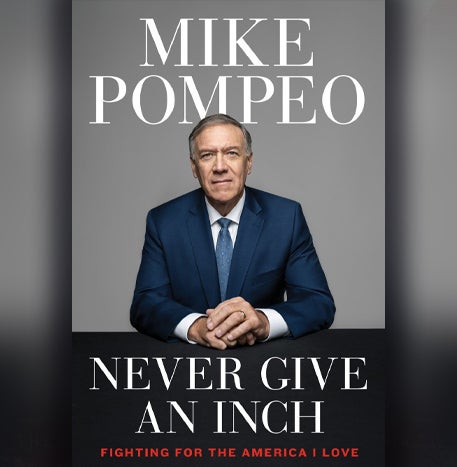 You can see what happens when you flip the script. President Biden said, “Oh, this is a pariah nation.” He immediately had to go on bended knee to the kingdom and ask them to produce just a little more crude oil. We did not for a moment mistake the fact that this was a bad act, but we did not for a moment forget the putting America first was what really mattered most in keeping America secure and keeping a relationship, a security relationship and a diplomatic relationship with the Kingdom of Saudi Arabia and the United States.

SEC. POMPEO: It’s largely a settled question. This virus came from a laboratory where they were working on the virus and others like it in Wuhan, China, and it leaked accidentally from that lab. And then the Chinese Communist Party knowingly sent that virus across the world when it was inside of human beings on airplanes. And they killed millions of people as a result of that decision.

CLAY: So, what consequences should there be on China? And what do you think about people like Dr. Fauci who are still saying, “Oh, I don’t believe the lab leak theory happened?” If you’re correct — and I agree with you — that this was a lab leak and that China tried to cover it up and also then basically spread this virus all over the world, it seems like there should be really severe consequences for them. And it also seems like it’s kind of an important discussion to be having in the United States and not have somebody like Dr. Fauci wagging his finger and saying “The evidence doesn’t support this and how dare you even raise it as an issue.”

SEC. POMPEO: Well, the second one’s easy. And Dr. Fauci got this wrong from the beginning. (Unintelligible) debates on gain of function research is angles on the head of a pin. The truth is, he knew that America was funding gain of function research in the laboratories in China. I can’t explain why he’s chosen to do that. Perhaps it’s money. I don’t truly know. But I know this. I know he’s wrong. I know that with near certainty that it came from that lab. You should know that lab is still up and operating and conducting the same kind of research it did before this thing leaked. Who knows when we will see that again? Which really gets to your second question, what should the penalty be? How should we respond to that? There are lots of pieces to this. The challenge to the Chinese Communist Party far extends beyond…it’s far beyond the challenge of the Wuhan virus. And we have for 40 years allowed the Chinese Communist Party to be at war with us, at least economic war. And we’ve turned the other cheek. One of the things I’m most proud of that I did a secretary of state, is we confronted the Chinese Communist Party in a serious way. We understood its ideology, we understood its economic motive, and we began to put real restrictions on their capacity to do harm to the American people.

BUCK: Secretary of State Pompeo, appreciate you joining us to talk to us about all this. And people should go check out the book: Never Give an Inch. Former Secretary Pompeo. Appreciate you, sir.

SEC. POMPEO: Gentlemen, thank you. Have a good day.