Ryan Girdusky on Redistricting and the 2022 Midterms

CLAY: Joined now by Ryan Girdusky. He’s the founder of the 1776 Project PAC, author of They’re Not Listening: How the Elites Created the National Populist Revolution. He’s also an expert in redistricting, which at times can sound a little bit nerdy but is going to be massive as we go into 2022 and try to find out what’s going to happen in the House and certainly in the Senate.

But this is primarily a House-related issue. Ryan, appreciate you joining us. Earlier today I believe we are now up to 25 different, currently sitting House Democrats — potentially including eventually Nancy Pelosi as well — who will not be running for reelection. What does…? Let’s start there. What does it typically tell you when the party in power is having so many current elected officials decide not to run in the upcoming midterm?

GIRDUSKY: Hey, thanks for having me on. I think that even more important than the number of members who are retiring, is who is retiring. And there’s a lot of members now who are chairmen of different committees, which is a very powerful position. It comes from seniority. It’s a position you spend years and years trying to cultivate to get on that position. They are retiring.

So they know they won’t be chairing those committees anymore. That is a clear sign that it’s not going well for Democrats, and they can kind of read the writing on the wall. They have to leave now or lose in 2022 or just become a member of the minority where you have no power. From being a position of immense power to have no power is not really worth it. 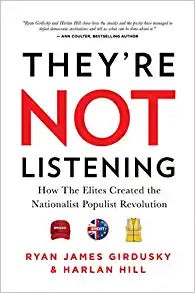 BUCK: Ryan, hey, buddy, it’s Buck. I want to know how you think the redistricting is going. I mean, here’s one. Mike Allen wrote just earlier today that Wasserman says redistricting is turning into “a happy surprise” for Democrats. Here’s what I’m hearing from people who pay close attention to this. And for everyone who’s listening, this could determine who’s in control of Congress, right? This stuff really matters. Redistricting doesn’t sound exciting in general.

It’s not something that gets people to jump to the front of their seats, but it has major implications. Ryan, what I’m hearing is that where Democrats can, they go all the way and get the best possible deal for themselves and their power in terms of the districts they’re drawing, and in a lot of spots Republicans are getting a little weak. Is that what you’re seeing? What’s going on?

So there are only be like 46 real swing districts left in the country after redistricting that either went for Biden or Trump by a single digit. Secondly, Republicans don’t control that many, many big, big states. Texas and Florida. But aside from that, the bigger ones — New York, Illinois, Pennsylvania, California — are not controlled by Republicans. So Republicans didn’t have that many big states that they could sit there and they could break Democrat districts in.

They have a lot of states, a lot of smaller states where Democrats either one or two seats that they could have redistricted. Kentucky, Indiana, Tennessee, all these smaller states where they could win one or two more Democratic seats. Republicans really haven’t taken the plunge. They didn’t redistrict Indiana 1. They didn’t redistrict the sole Democrat in Kentucky. Instates like Ohio and North Carolina, Republicans have really went for the gut, for the guttural and they have seen and now they’re being challenged in court.

But if the court lawsuits get thrown out, they’ll be fine. In places like New Jersey, for example — in New Jersey — there are six swing congressional districts in New Jersey. Ciattarelli won all six, the guy running who is Republican ran for governor. After this election cycle is over — redistricting cycle is over, rather — there will only be four that he won. And the number of seats the Republicans can possibly win is three. So if you look at Northern Jersey, seats Like District 7 which was a Biden plus-10 seat, it will be a Biden plus-three seat.

In Maryland, there’s only one Republican in all of Maryland. His seat’s gonna go from a Trump plus-20 seat to a Biden plus-0.4 seat. So he’s completely redistricted out of his district. In Michigan, you’re seeing two Trump seats become two very large Biden seats, and one Biden seat going to become a Trump seat. In Illinois, you have multiple seats that Republicans gonna be completely wiped out of.

CLAY: All right, Ryan, all of those numbers that you just ran through, if you were setting an over-under right now, what do you think the expected Republican pickup would be, factoring in redistricting now in the 2022 midterms as we sit here in January. What’s a reasonable number in your mind?

GIRDUSKY: So, first of all, there will probably be eight to 10 more Biden seats than there were before the redistricting. So there will be about 10 more seats that Biden won that he did not win last time. Even with that, though — even with the new Biden seats — Republicans are probably looking at a possible 30-seat pickup because there are a number of seats that are either… You look at the trajectory that New Jersey election, the elections out on Long Island and the elections in Virginia.

Republicans are gonna see big pickups in North Carolina, in Arizona, one seat in Montana, one seat in Texas, one seat in New Jersey, two in Ohio, and one in Maine. And then the rest is really we’ll sit this and see. Can they hold on in New Mexico, the sole Republican in New Mexico? Can they hold on in Maryland, the sole Republican in Maryland. If they can, if Republicans can hold on to these new tough Biden plus-one, Biden plus-two seats — which is not impossible at all — they’ll be fine; they’ll win the majority comfortably by about 20 seats. If they start losing on these slightly more Biden-leaning districts, it will be much, much tougher.

CLAY: Speaking to Ryan Girdusky, founder of the 1776 Project PAC, author of They’re Not Listening: How the Elites Created a National Populist Revolution. Ryan, before we let you go, Schumer’s talking about a one-time exception in the filibuster to get voting rights through. Is he on a serious path here or is this just rhetoric? What do you think?

GIRDUSKY: No. Joe Manchin is gonna completely put a kibosh to that in three seconds. Manchin has basically said no change to the filibuster whatsoever, and they really have no avenues to get anything done. January and December have been pretty dead months for the Democrats in the Senate, and they know they need to deliver a little bit more to their constituents and their voters.

But looking at we’re going on now straight into the general election of the 2022 cycle, very little will actually be done at this point. It will mostly be — probably be — all judges and a few spending bills. But other than that, they have no restitution to sit there and get anything done that they’ve planned on getting done.

BUCK: Ryan Girdusky, everybody. Ryan, thanks so much, man. Great to have you with us. We appreciate it.