BUCK: Joining us now, the governor of South Dakota, Kristi Noem. Governor, great to have you back. Thanks for being with us.

GOV. NOEM: Oh, man, it’s fantastic to be with you guys. How are you doing today?

BUCK: We’re good. We know you got a new book out, Not My First Rodeo. We’ll talk to you about that in a second. I just wanted to get your response, ’cause I know South Dakota has taken a very strong stand as a state on the life issue. I’m sure you heard earlier today, over in Europe, Biden trashing the Supreme Court, saying it’s destabilizing. What do you think about our commander-in-chief saying that about our Supreme Court overseas? Also, what is the state of protecting life right now in your home state, Governor of South Dakota? 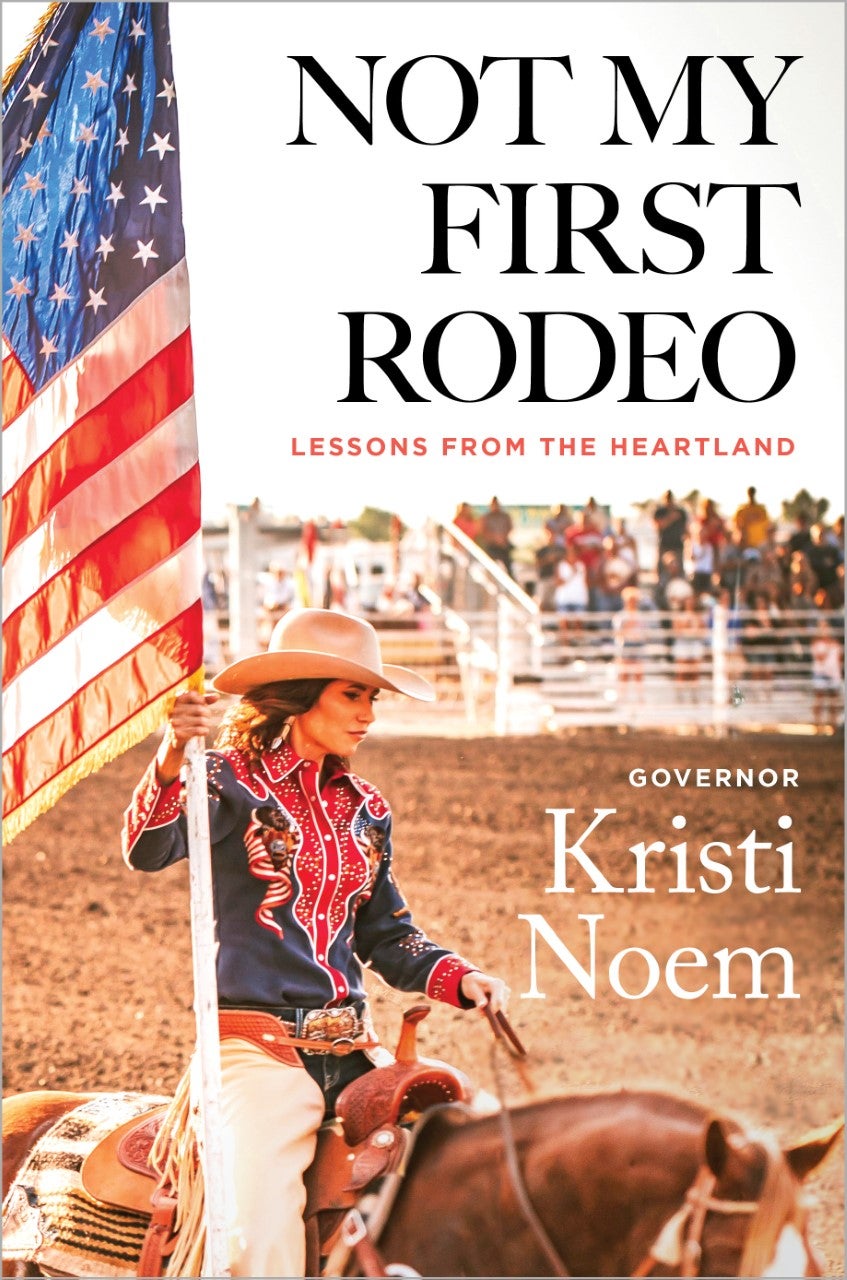 GOV. NOEM: Well, number one, I would say every single one of his policies is destabilizing the United States of America. It’s extremely hypocritical to be going after the Supreme Court — especially overseas — when everything he is doing is weakening America, and again with that statement. So, his timing is bad, but so is every one of his instincts, and I guess we just try to muddle our way through until we can get new leaders in place, and it’s not very long until we get the chance to do that. So when it comes to life in South Dakota as far as abortion rights South Dakota back in 2005 passed a trigger law that said:

In the event that Roe is overturned, it would be become illegal to perform an abortion in our state except to save the life of a mother. So, that is the law of the land today, and I’m grateful that South Dakota recognizes that every life is precious. I think that the Supreme Court — by fixing this wrong decision that was made almost 50 years ago — has finally done what we’ve always recognized was the true place this discussion should happen. It should happen at the state level. It should happen by people that are elected close to the public near home. So, it’s the right thing to do, and I’m glad of where — I’m proud of where — South Dakota is. I’m sure they’ll continue to have discussions here. But today I’m grateful for our stand for life.

CLAY: Governor Noem, we had Governor Abbott on earlier this week, and he was talking about the disastrous policies as it pertains to energy that are being embraced by the Biden White House. As the governor of South Dakota, for people who may not see it on the statewide level, what has Joe Biden meant to energy production in South Dakota? How much has he hurt?

GOV. NOEM: Well, we don’t produce energy, really, very much in South Dakota. We have a few rigs, but North Dakota got most of the oil. We got Mount Rushmore, which we’re happy for. We love the — we love Mount Rushmore and what it means to the country. But we are a high-demand energy state. So we have it’s very cold in the winter. It’s hot in the summer. And it’s a long ways to drive anywhere. So we have incredible demands.

And when he affects this kind of energy policy and drives up the cost the way that he has it affects every single family. It’s not an option for South Dakotans to not drive, to not buy gas. Oftentimes their work is 30 to 40 miles away. Their school or activities for their kids are 20 to 30 miles. We just have to go anywhere and get in the car to go get groceries, go to the doctor. So it impacts rural states more and our budgets than it does these urban areas that have other options.

CLAY: First of all, apologies to the Dakotas, where we’re big —

CLAY: — and I now am never gonna get elected anywhere in the Dakotas.

BUCK: Our North Dakota affiliate, Clay, is emailing us.

CLAY: By emailing I’m gonna be destroyed now for missing up the Dakotas. But, Governor, your book, I saw earlier on Fox News talking about the impact of your father’s unexpected death and what it meant for you, and I thought it was such a compelling story that you were telling. For people out there who may not know what happened in your life and the story that you are telling, take us into what you wanted to bring to the nation with this book and what that was like for you as a young person to deal with.

GOV. NOEM: Well frankly, I think a lot of people the first time they heard my name was during covid, when Elizabeth Warren and Rachel Maddow and the left were on national TV night after night kicking me in the head for all the decisions I was making in South Dakota. They called me dangerous and reckless. And I’m sure people from across the country thought, “Who is this lady in South Dakota? She just showed up on the scene.” But that’s not true. This is not my first rodeo. I’ve had a long life running businesses, challenges and serving in the legislature and Congress, and it makes me who I am.

So this book is about politics, but it’s also about my life so far. Losing my dad changed everything. My goal growing up was to be a farmer and rancher. He was my best friend. He was a cowboy, he was tough, and my favorite thing in the whole world to is chase cows or go sit in a tree stand. So what I do today is very, very different than what I had planned, anybody in my family had planned. But when he died at the age of 49, we got hit with death taxes, and I came home, quit college, took over the operation as the general manager, and it made me angry.

I could not believe we had a tragedy; all of a sudden, I owed the federal government hundreds and hundreds of thousands of dollars that I couldn’t pay. I had to take out loans. I couldn’t even get a bank to finance it. I had to get a couple of wealthy farmers to loan me some money. But it took me 10 years to pay off that debt, and I just started showing up at meetings, passionate about tax reform. So that’s how I got involved in government and politics. My dad had always said, “You don’t complain about things, Kristi. You fix ’em,” and more than anything I wanted to make him proud even though he wasn’t gonna be around to see how I turned out.

BUCK: We’re speaking to South Dakota Governor Kristi Noem. She has a new book out — Not My First Rodeo: Lessons From the Heartland — just out this week. One more for you, Governor. We’re heading into what looks like — hopefully — a pretty serious Red Wave. How are you seeing it from your perspective, and what is your view? At a point right now where people in your home state, all across the country are having a tough time paying not just for gas, for food, paying the mortgage, paying the rent. What’s your case for optimism right now? Why should people stay engaged when they might be feeling a little disaffected?

GOV. NOEM: Well, I think for the first time we have so many people that are paying attention. We have folks that never cared much about government and politics that because of what happened in the pandemic now are sitting up and saying, “What is the role of government in our lives? What do we want the government telling us to do and not do?” and recognizing that what Biden is doing is destroying America as we know it. So I think that is a reason to be optimistic.

You know, there’s nothing harder than getting people motivated that don’t care. Now people care. They care passionately. And they’re gonna be engaged. Now, our job as elected leaders and as public officials is to make sure that we’re sharing not just what we think but why we believe what we believe — and the history of this country, the Constitution, the role of government in our lives as our founders intended it. So it’s not a time to get lazy and talk in sound bites and just blow people up for an instant headline. We have to start really recognizing that folks are hungry for information, and they want a way of life that our parents had growing up and that they’re ready to do some work to make sure we get it.

CLAY: You mentioned Mount Rushmore a little bit earlier, Governor Noem. So I’ll at least get that right for the Dakota crew, but I thought one of the most powerful speeches Donald Trump gave during his presidency was there in front of Mount Rushmore with you defending American exceptionalism and American history. You obviously have had a much bigger profile in the years since, certainly rolling through covid and beyond. Do you hope that Donald Trump runs for reelection in 2024, a second term, and are you at all interested in the national political landscape potentially as a vice president for him or potentially running for president yourself?

GOV. NOEM: Well, listen, I talk to the president quite often. He’s gonna run. I don’t know of anybody that can beat him in a primary no matter what they say. He’s got an extreme group of loyal people, a large group of people that support him across this country, which is remarkable. And I just don’t think anybody else can beat him in a Republican primary. Maybe a general election would be challenging.

But I think if he put the team together that shows people that he wants to govern and fix what’s broken with this country, fix it as soon as possible, I think that will be very, very powerful. He would announce who his attorney general is gonna be, his secretary of state, his vice president, all of that is important because this man knows good people, he knows tough people. He also understands tackling a problem and getting it fixed. So if he runs, I’ll certainly support him.

BUCK: South Dakota Governor Kristi Noem. The book, folks, is Not My First Rodeo: Lessons From the Heartland out this week. Governor, thanks for coming on. Good luck to you.

GOV. NOEM: Oh, you guys too. Have a wonderful day. Appreciate it.

CLAY: That is Governor Kristi Noem of South Dakota.