The Man Big Tech Wants to Ban: Berenson’s Back!

BUCK: We have author of Pandemia and please go subscribe to his work on Substack, Alex Berenson with us now. Alex, appreciate it. Thank you, sir.

BERENSON: Thank you so much for having me.

And that data is completely correct. You know, I talked about it on Rogan about six weeks ago and it has only gotten worse since then. This is U.K. government data. This is not, you know, your brother’s cousin telling you that zinc works or something. This is government data. They’re counting cases. The only difference between U.S. and U.K. is that we don’t really count cases. Okay? Both because our health care system is so fractured and so problematic and because the CDC clearly does not want to collect this data. They haven’t collected it.

But in the U.K. the data is extremely clear. There is no protection from infection or transmission after a few months. It just disappears. And we can argue about the level of protection against severe disease and death, but that clearly goes down. Also whether it goes down to zero, we don’t really know, although there’s some evidence it trends that way.

CLAY: So where — first of all, thanks for coming on with us, Alex. Where are we headed this winter based on the data that you see right now?

BERENSON: I’ve been saying this to you guys for two months, you know, and I’ve said to you, I don’t like to make predictions about covid ’cause covid makes fools of people who try to predict it. But it seems very clear to me that we were gonna be headed back up again and now we are. We’re over a hundred thousand cases a day in the United States. In northern states, Vermont is setting records. New York had its worst day I think yesterday in six months.

You know, you can very clearly see what’s happening. It happened in the U.K. over the summer when, you know, the U.K. was the first place to vaccinate. It happened in with Israel. it’s happening right now in central Europe. Germany and Austria are seeing incredible numbers of cases.

The only thing that’s gonna protect the U.S. is that we had more cases before. So there’s a number of people out there with natural immunity and our vaccination sort of stopped and it was more stop and start than Europe. So the waning immunity is gonna be a little bit more stop-and-start too. But human biology is the same everywhere and we have every reason to expect that there’s gonna be problems going forward.

Look. I will give you one piece of good news, which is it is possible that the Pfizer drug, not the Pfizer vaccine, but the Pfizer drug which had very, very the good results in a clinical trial; so good that the trial was stopped early a few weeks ago, about ten days ago, that may actually begin to alter the course of the epidemic when it is approved. Okay? It will not be the vaccines. It will be this drug.

And I really need to write a Substack about this. I’m working on one. I spoke to a really smart doctor who’s not political, but he said in his view covid is over when this drug is approved.

BUCK: So wait. So, Alex, so it seems to me that if we get to a point where it’s clear the vaccines don’t really prevent transmission very. I mean, I believe you said really at all after a certain period.

BERENSON: At all. Yes.

BUCK: But they clearly don’t prevent transmission very well. And if the real closest thing to a silver bullet we have isn’t the vaccine but is treatment for anybody who gets covid via this pill and whatever other modalities are used, then what’s the rationalization for vaccine mandates and also for us just not going back to living of our normal lives and if someone gets really sick they go get the covid pill?

BERENSON: The rationalization is that Tony Fauci has been telling you for 18 months that this is a disaster that vaccines are gonna solved, okay? And he won’t admit he was wrong.

And this guy, by the way, this doctor who was around during HIV during the beginning of HIV pointed something out to me that no one has ever said to me before and I don’t think the point has been made.

Fauci gets blamed for a lot of things, for the early days of HIV. People say, well, there was this drug AZT and it killed people and he refused to admit that. This guy said, forget that. Like, that’s all sort of political. The truth is the big mistake Fauci made very early in HIV was from ’82 to ’87 he wanted to bolster people’s immune systems. Okay, he thought that that was gonna cure HIV, the vaccine would cure HIV even if you got infected it would bolster your immune system. That was wrong.

The AIDS activists said, Tony, we were healthy before all this happened. It’s not about our immune systems failing. It’s about this virus destroying us. You need to focus on the virus and get anti-virals out there.

And guess what? That’s exactly how it has played out with covid. He’s wanted to come up with a vaccine, and it looks like the vaccines actually don’t really work very well and this drug which targets the virus, not trying to bolster your immune system, directly attacking the virus, may be what gets us out of this.

It’s amazing, history — you know, it is a joke, it’s a saying — history doesn’t repeat itself, but it rhymes. Tony Fauci will not admit that he’s wrong, you know, and the Biden administration has staked — you know, they’re so dumb, they think that, you know, people are hiding in their homes because of covid when 60% of the country just wants to forget all about it. But their base — you know, they spent 18 months scaring them. They cannot figure out how to drive out of this ditch.

CLAY: It’s a great point, that they basically got elected by claiming that Biden was gonna solve covid. And now covid has been worse in 2021 in terms of deaths than it was in 2020. You’d think they’d acknowledge maybe politics isn’t the way to deal with this.

CLAY: What is going to be to blame now this winter that the Biden administration is gonna try to sell? Lack of boosters?

BERENSON: You can see it in Europe. They’ll try to blame the unvaccinated, which — I mean they’re doing it in Austria and Germany even though those countries have higher vaccination rates than the U.S.
Portugal, by the way, Portugal is, you know, this country that’s been held up as the shining barometer of getting everybody vaccinated, they’re going back up the curve.

So, yeah, I think they’re gonna blame — they’re gonna say, you know what? We do need to mask again and the stupid unvaccinated people they won’t mask and now nobody wants to mask, we do need boosters. It’s all about, you know, Alex Berenson and Tucker Carlson, Clay Travis and Buck Sexton and Joe Rogan, it’s those guys. It’s just nonsense, okay?

The virus, it doesn’t matter what you do. A month ago The Atlantic wrote a story about how great Germany was doing. Now Germany has more cases than they have ever had. Everyone’s getting infected with this. They’re getting infected with it either before or after they’ve been vaccinated, period, end of story. Most of us will be just fine.

Now thankfully it looks like we have a drug that might actually help to plus we have the monoclonal antibodies. So we just need to accept this. We need to stop it mandates. Fortunately, this country seems to have a little bit more, you know, tradition of individual liberality. It looks like they’re not gonna be able to force these mandates through but if you look at what’s happening in Europe they are seriously talking about separating vaccinated and unvaccinated people. It is so insane.

CLAY: What is the status of the Pfizer pill? 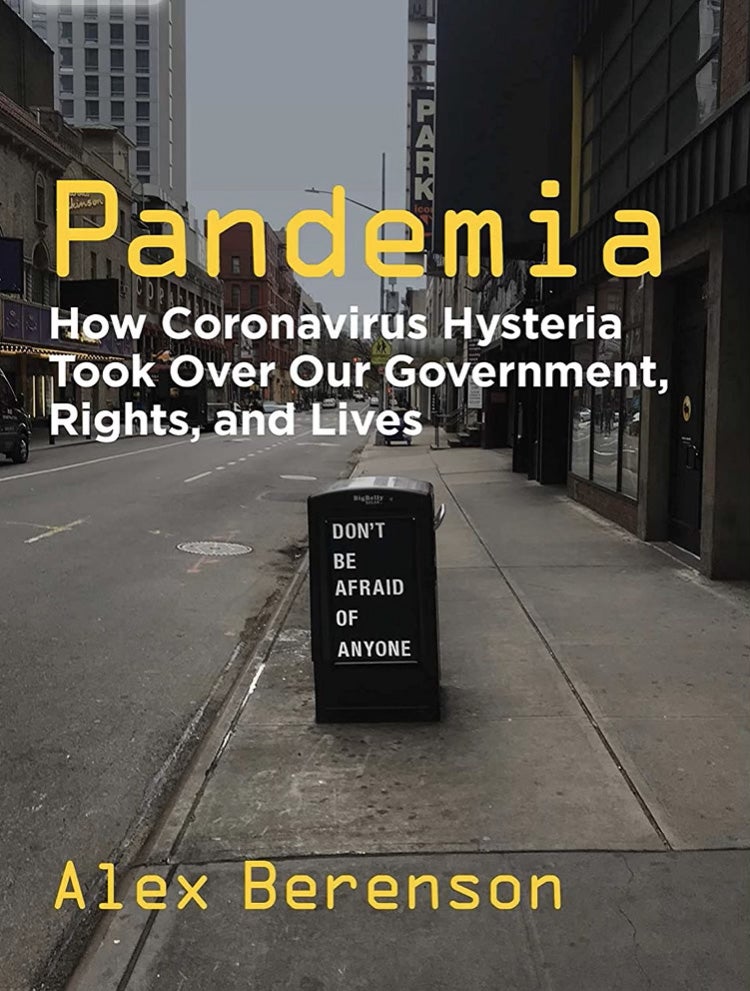 BERENSON: Pfizer has filed for an EUA for it. I think it could be approved by — the vaccine was approved that quickly and the data on the pill is better than the data on the vaccine was. There’s also a Merck pill, but that pill is more problematic– it’s called a mutagen. It can actually cause DNA alterations. So that one is not as good. The Pfizer pill looks better.

BUCK: All right. Alex, we’re gonna have you back on, man, ’cause this is not going any time soon.

BUCK: Yeah. Thanks for being right again, by the way. As much as we’re all getting booted off of Twitter and all this other stuff. Just talking to Berenson, you are marked by social media. But we stand beside you, sir. Thank you.

And check out Pandemia, which is his book, and subscribe to Alex’s Substack, which I get every day. Alex, thanks so much.

BUCK: There we go. Thank you, everybody. Thank you.