The Photo That Proves American Exceptionalism

BUCK: The justice department has hired the first-ever chief diversity officer under this administration, and we should all know that you’re going to see a lot more of this. Wokeness is now a thing that is everywhere. It is in corporations. It is in media. It is in the government apparatus itself. So you have a chief diversity officer who will join the deputy assistant attorney general of human resources to, quote, “Lead and coordinate the departments diversity, equity, inclusive and accessibility in the federal branch.” Clay, I think The Hunt for Red October is probably the best stand-alone movie of the entire Jack Ryan, Tom Clancy series.

BUCK: Blasphemy! But that’s all right. All right, we can settle that one another time. I like that you had it all ready though. I would actually —

BUCK: I would actually go Clear and Present Danger over Patriot Games. So we’ve got a real fight on our hands here. But here’s what I want to say about the Hunt for Red October. I put Patriot Games as number 3, to be fair. Whatever the Ben Affleck one, the Sum of All Fears was?

BUCK: Not quite Gigli-level bomb, but it was pretty bad. But in The Hunt for Red October, remember Sean Connery has to kill the guy? He kills a guy early on; he kind of hits him in the neck or whatever and that’s the political officer. But this was a real thing in the Soviet Union. They embedded political commissars, individuals who were part of the apparatus of the state control.

BUCK: Yeah. They were like the commie hall monitors in every government agency, every office of every government agency, every military unit, even frontline military unit, to make sure everyone only mouthed the allowed and preferred slogans. Clay, this diversity-and-inclusion stuff? This is the left wing commissars infiltrating all over society, including, now, the department of justice.

CLAY: You know how they’re taking over is because anybody who questions whether jobs like these should exist is racist, and then ends up losing their job. Right? This whole diversity and inclusion nonsense. First of all, for anybody out there who wants to question the legitimacy of America, how many…? You’re a big military historian, too, Buck; I am, as well.

How many militaries do you think there have ever been, where moms handed their babies to members of the military in an effort to have those military members save the babies? Which is what we’ve been seeing happen at Kabul airport on a regular basis. All these different Marines holding babies, Afghan refugee babies, trying to get them onto planes. 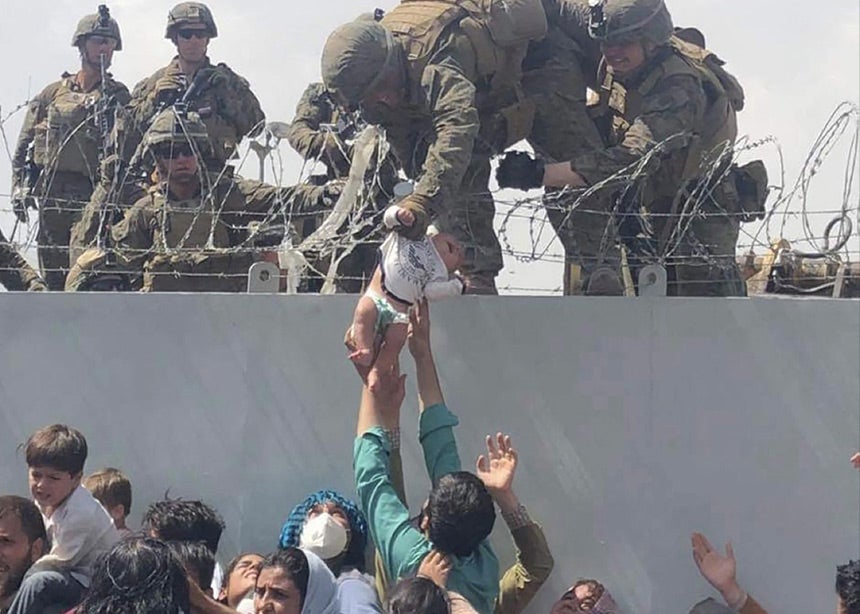 You have the famous photo, probably going to win a Pulitzer Prize, of the Marine reaching over down over the razor wire on top of the wall to take a baby and pull it back over. Those are images that are virtually impossible for people who want to argue that America’s a horrible, fundamentally racist, awful place. Because can you think…? How often would that have happened in military history that soldiers have been trusted like that by foreign nationals?

BUCK: It happens with the American military.

CLAY: Yes. That has almost never has happened historically.

BUCK: People don’t even talk about what the Red Army, what the Soviet Army did in World War Two — that’s a whole different conversation — when they took over the German areas. But I was reading With the Old Breed over the weekend, Clay. We should talk about that. I almost finished it. What a fantastic book, speaking of military history, but we’ll come back and talk about that in a few.

CLAY: Yeah, in the meantime everybody should have the right to express themselves.

Milley Defense: It's Not Treason If It's Against Trump

BUCK: You could say they are calling this a perfectly fine phone call.

PAUL: If it was true that he was actually insinuating that the president could attack China, he should be immediately removed.

The Democrat Party Platform: But, Trump...

BUCK: Every time Democrats get cornered on one of their own or someone on their side, the move is going to be, "But Trump" or "But the insurrection."