Zalmay Khalilzad Tells Us What Went Wrong in Afghanistan

BUCK: Let’s turn our eyes to Afghanistan for a moment and somebody who can shed a lot of light on exactly what happens there and what is going on today. As I speak to you, there are still hundreds of Americans who have been left behind in Afghanistan. We have Zalmay Khalilzad with us now. Until a week ago, Mr. Khalilzad was the U.S. special representative to Afghanistan. Prior to that, he was U.S. ambassador to the United Nations and to Iraq and Afghanistan who served under multiple presidencies. He’s also the author of a book called The Envoy. Ambassador Khalilzad, thank you for being with us.

AMB. KHALILZAD: Well, it’s great to be with you, a pleasure and an honor.

BUCK: Tell us, sir, what happened over this summer? I mean, I know that’s a very broad place to start. But for one thing, we were told that Afghanistan by the Biden administration, that as things started to look really bad, as the withdrawal looked haphazard, as people were running on the airport and onto the tarmac and jumping onto plane wheels, as they were taking off, that this was essentially the implementation of the Trump plan. That was what they were saying. Can you address that first? What’s true about that and what is not? 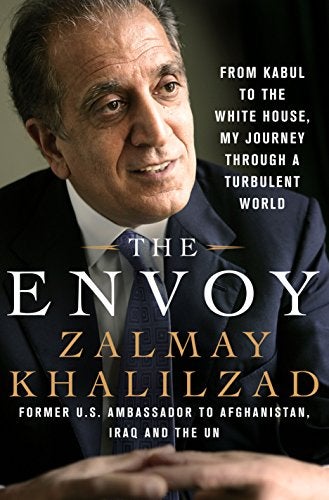 AMB. KHALILZAD: Well, thank you for the opportunity. As you know, President Trump decided in 2018 that we should withdraw our forces from Afghanistan because it was costing us too much, some 40 billion a year and that we were not winning the war and what would have taken to win the war in Afghanistan, we were not prepared to do. So he asked me to go and negotiate the withdrawal with the Taliban, and we agreed on a condition-based agreement that had four elements.

One was we would withdraw our forces over a 14-month time frame — it was signed, this agreement in 2020, February of 2020. And, second, Afghanistan will not be used by Al-Qaeda or any other terrorist group against the United States, that the Taliban and the Afghan government both agreed to guarantee that. And, three, two sides will start talking to each other, to negotiate a political settlement and that there will be a comprehensive ceasefire. So, the president wanted to have the resources freed from Afghanistan to be used for confronting China, which was presenting a comprehensive challenge among many factors to the United States of America wanting global hegemony and to address some domestic needs from the freed resources.

But, as we began to implement this agreement by the time that President Trump was leaving office, we were down to about 2500 troops, the Taliban had agreed not to attack U.S. forces and there has not been a single American fatality from the Taliban since the agreement was signed. There was Afghanistan negotiations that started, but they had not reached an agreement. And there was no ceasefire, although the Taliban did not attack us when they attacked the Afghan forces, we came to the defense of the Afghan forces and the Taliban agreed to that.

But when President Biden came, he reviewed the agreement for several months. They added four more months to the timetable because of the review. But then rather than proposing or sticking to a condition-based approach, President Biden decided to withdraw based on calendar, and he decided forces should be out by the end of August, initially said September 11th, but then moved to end of August. And during this period I pressed the Taliban not to attack the U.S. forces withdrawing. They did not. But what happened is two things, one, that there was a lot of official and other statements that when the Taliban come to power in Kabul, if they do move into Kabul, there will be a bloodbath. And, unfortunately, the Afghan security forces performed very poorly in the aftermath of the Trump administration and they were losing territory, not fighting. And we also indicated that those who were at risk to be withdrawn, and when we got closer to the withdrawal, people rushed to the airport out of fear on one hand that maybe that there will be a bloodbath in Kabul and, two, out of an opportunity that they saw because the message that was sent was anyone who comes to the airport will be taken to the United States or Europe. So, this combination of fear on the part of the people and opportunity to go to America created this rush to the airport that produced those terrible scenes. And it was a debacle at the airport. So that was very unfortunate.

CLAY: So, big picture here. You just kind of laid us through — and I appreciate all the details there as we worked through. And again we’re talking to Zalmay Khalilzad. He, until a week ago, was the U.S. special representative to Afghanistan. Prior to that had been the U.S. ambassador to U.N., Iraq, and Afghanistan. You’re also the author of the book called The Envoy. How bad of a job in your mind did Joe Biden make? Did he make a series of mistakes? One mistake? What turned this into the calamity that it became?

AMB. KHALILZAD: I think that first the decision to go from condition-based approach, which had been agreed to in the agreement, that was one. And justification was for that if we make it condition-based, maybe the Afghans will never agree to each other on a political settlement we might get stuck. But more to the airport debacle, the reason there, I think the mistake there was this messaging that anyone who comes to the airport would be taken to the United States, as you know, if you park a plane anywhere in the Third World and say if you make it to the airport we’ll take to you America, thousands will rush to the airport in almost any country in the Third World, in the developing world. I think that message, that perception, that belief on the part of the Afghan people led to this situation, the horrible situation at the airport.

CLAY: What about abandoning Bagram Air Force Base? You know the area well. By saying, “Hey, we’re gonna free all of the prisoners there,” reports are that one of the suicide bombers or the suicide bomber was in prison prior to that, did you agree with the decision to abandon Bagram Air Force Base, or should the United States have maintained a presence there until they pulled all of their people out of the country?

AMB. KHALILZAD: Well, of course that decision with regard to how to withdrawal, and what sequence, was made by the military commanders. And I did not believe that when they were contemplating sequencing, that this scenario which happened after that, the scenario of signaling or people believing that anyone who makes it to the airport will be taken to the United States was not the case. That was not an issue. The withdrawal plan — there were two plans. One was what to do with the military, the U.S. military. The second was to deal with issue of American diplomats and American citizens who are registered or the embassy was aware of. There is no scenario that had been, to the best of my knowledge, that there would be a rush for the airport by hundreds, you know, if not thousands, maybe over a hundred thousand people were withdrawn, and more I’m assuming Afghans were evacuated. So that scenario was not informing, did not inform the decision on sequencing.

BUCK: Ambassador Khalilzad we’ve got a couple of questions we’ve got before we go to break here so I wanted to throw a couple things at you, two of them, and just get your gut reaction to where we are right now. The Pentagon as of today up at Fox News they’ve confirmed this, nearly 450 Americans trapped in Afghanistan. Question one for you, in short order if we could, are we gonna get those Americans out in your estimation, will the Taliban allow us to get them out? And question two, how confident are you the Taliban is not gonna become a safe haven for terror attacks against the U.S. homeland?

AMB. KHALILZAD: On the first one I think those Americans who would like to leave, can leave, and we have an agreement with the Taliban that we negotiated that they announced on national radio and TV that they will facilitate, not impede, the withdrawal of any Americans or people who have worked with United States or green card holders. So, the challenge has been to reach out to the Americans to identify them because quite a significant numbers of them are Afghan Americans who have businesses and homes, and they have been reluctant to withdraw, to leave, to be evacuated. But, if they want to, I think that Taliban has given the commitment to stick to it and I haven’t seen any evidence to the contrary that they will do that.

On your question about safe havens, I think we taught the Taliban a lesson. Nineteen years of severe punishments that they received. They lost power, and they’ve committed themselves specifically not allow the terrorists including Al-Qaeda, specifically mentioned in the agreement to plot and plans against the United States or our allies. And we have to hold them to it, but we can’t trust them. And, therefore, we need to be monitoring the situation. We shouldn’t do what happened during the Clinton administration, that the Al-Qaeda threat was growing in Afghanistan, we didn’t take the necessary measures, and 9/11 happened. So we shouldn’t make that mistake. We should keep our focus, our intelligence on what goes on there and be able to strike and strike decisively if the threat reemerges.

BUCK: Ambassador Zalmay Khalilzad, author of the book, The Envoy. Sir, appreciate very much you coming to answer our questions and shed some light on this continuing situation. Really appreciate it.

AMB. KHALILZAD: Well, thank you. It’s great to be with you. All the best.

BUCK: Thanks so much.