Congressman Jim Jordan Covers It All with C&B

CLAY: We bring in now Congressman Jim Jordan from the great state of Ohio. Congressman, are you watching? What was your reaction when you saw and/or heard about this verdict?

REP. JORDAN: I was not watching. I was on a plane, but as soon as it landed I got information from our office. My reaction is God bless America. Our system works. Due process works. This is a win for freedom. This is a win for facts, for truth. It’s a win for the Second Amendment. This is good for our country where that jury was not intimidated. They looked at the facts, they looked at the evidence, and, you know, if that wasn’t self-defense, what is? What is? So, no, I think this is good for our great system and our great country.

CLAY: There’s also a lot of people in Congress, the president of the United States, who already prejudged, Congressman. We played a clip of a lot of people in media calling him a murderer, school shooter, 17-year-old vigilante, teenage domestic terrorist, deeply racist murderer. What does it say about them to have this jury repudiate all of their attacks upon Rittenhouse?

REP. JORDAN: I think it says — what it says is this is how good our country is. ‘Cause in spite of this the jury got to the truth. I see this much like this other issue that, frankly, you’re involved in, this issue where the Department of Justice is trying to chill the speech of parents and they’re trying to force their beliefs on the country and regular moms and dads are saying no, you’re not. You’re not gonna do that. And this — the folks in Wisconsin in that courtroom on that jury said, “No, you’re not. We’re gonna do what the facts say, what the truth says.”

I see this as such a positive — and I think there’s a change happening, Clay. I said this when Merrick Garland was in front of our committee. I said your actions when you tried to treat parents as domestic terrorists — and we may get into that, I said, it is a catalyst, it’s the last straw, it is the start of a reawakening in this country for freedom, for liberty, for the principles that make our country the best. And you’re seeing it happen, and it is so darn encouraging.

BUCK: Hey, Congressman Jordan, it’s Buck. And I just want to follow up on the attitude as well. I mean, there’s the FBI that, you know, put out the stuff, I mean, the Merrick Garland AG letter and now the FBI, according to that whistleblower complaint — I saw that letter. We read some of it on air that you put out about using terrorism tags for concerned parents. I mean, this is dystopian level insanity. But it’s very clear that there really is a sentiment among the left in this country that parents should just shut up.

I mean, here’s a piece on NBC News that just went up in the last 24 hours, an opinion piece. But he’s part of it. “Parents think they have the right to control teaching and learning because their children are the ones educated. It’s sort of like entering a surgical unit thinking you can interfere with an operation because the parent is your child.” Wow. I hope every Democrat across America takes that approach going into these midterms.

Christina Wyman: Parents think they have the right to control teaching and learning because their children are the ones educated. It’s sort of like entering a surgical unit thinking you can interfere with an operation because the patient is your child. https://t.co/XD38WODQus

REP. JORDAN: Yeah. No. But when they think we’re all deplorables, when they think we’re all racists, these elite people, when that’s their view, then they take this crazy attitude. But it is not gonna play well. We saw that in Virginia, we’re seeing that across the country. And understand this too. I don’t think this — the more I’ve looked at this and the facts now are starting to come out remember we have news that the school board association before the initial letter was sent on September 29th, before that letter was even sent the White House and the school board association were talking so I don’t think — and of course five days later after they send the threat Merrick Garland gets his memo and then we get this email that comes 16 days later out to FBI agents they put this threat tag, this terrorist tag on parents.

I don’t think it really started with the school board. I think that the letter was just a pretext. I think this came from the government. I think this is the Biden administration working with the Garland DOJ saying we don’t like parents pushing back on anything so we’re gonna chill their speech with this, but we’re gonna have to have something to be the catalyst so it’s gonna be this letter. I think it went that way. I think it was the government using the letter as a pretext to go after parents. What they didn’t count on, what they didn’t understand is the pushback they were gonna get from moms and dads. And that — again, that is what is so darn encouraging about all this.

CLAY: We’re talking to Jim Jordan, congressman from Ohio. He’s got a new book out, Do What You Said You Would Do: Fighting for Freedom in the Swamp. We don’t know what the fallout is going to be in Kenosha, whether there might be people who try to riot as a result of the not guilty charges. What should the state of Wisconsin do to protect the people and the small business owners this time in Kenosha that they didn’t do back in August which led to these charges against Kyle Rittenhouse?

REP. JORDAN: Yeah, great point. I mean, they should have the National Guard out. My understanding is that’s what they’re doing. And also leaders, the mayor, the governor, members of Congress, members of the Senate, leaders in the government should be standing up and saying, look, this is how our great system works, you all saw the — just be a leader, for goodness’ sake. That’s what’s needed. Frankly, that’s what’s needed in the White House right now, someone who will actually lead and talk about the things that need to be talked about instead of just catering to the left as we see Biden do. But be leaders. And my understanding, Clay, is that the governor there has got the National Guard called out; so I think that’s obviously the right move.

BUCK: Congressman Jordan, you know, the Build Back Better bill — a lot of B’s — has been voted through the house, Nancy Pelosi pushing it all the way by what was the vote, it was a handful, 220 to 213 today. How much of it is gonna get changed, do you think? I know that — asked me to kind of think about what they’re doing across the hall in the Senate side. But how — and the bigger point, the bigger question really is, how big a deal is this gonna be for those of us who are worried about inflation, drags on economic growth and the growth of government overall?

REP. JORDAN: It’s just gonna exacerbate the mess that the Biden administration and Democrats running all the federal government, the mess that they’ve created in just 10 months, it’s only gonna make it worse. We know that. Now, let’s hope Manchin and Sinema hold firm. They’ve said they want changes and everything else but they haven’t said — I hope this thing doesn’t pass, obviously, because it’s not just a number, it’s not just the spending. I mean, that’s bad enough, couple more trillion dollars in the already crazy spending that they’ve done. It’s the policy. It’s the left-wing energy policy that’s gonna make gas prices go up even more. It’s the tax increases. Mean, you think about the Democrats’ economic plan — I said this the other day — the Democrats’ economic plan is basically lock down the economy, spend like crazy, pay people not to work, and then for everyone that has been working, they’re getting ready to raise your taxes. Such a deal.

So, this is how crazy this all is. I hope it doesn’t pass. But for the president of the United States a few weeks ago to say if you pass this, if you spend two trillion more, it will help inflation, there is not a rational, sane person on this planet who believes that. Why the president of our country would say something like that is beyond me; so, again, let’s hope Senators Manchin and Sinema stay “no” and this thing doesn’t ever become law.

CLAY: Kyle Rittenhouse not guilty, Congressman, you’ve got the Steele dossier officially total crap, as you’ve been arguing for years that it was. You have inflation skyrocketing, the border is a disaster. Is this a turning point for moderate, middle of the road people to recognize how much the media has been lying to them? I mean, I talk to a lot of people, Congressman — I know you do, too — the amount of just flat-out lies that were out there about Rittenhouse versus what was actually proven at the court hearing at the case, I mean, I think it red pilled a lot of people out there that otherwise hadn’t been paying a lot of attention. 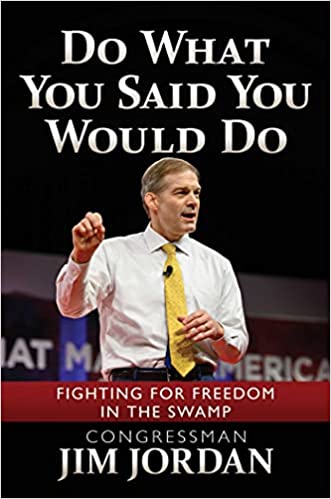 REP. JORDAN: Yeah. No, I mean, Donald Trump colluded with Russia, Donald Trump, kids were going to prison, Kyle Rittenhouse was a terrorist, was — went out looking for — to assault people and kill — I mean, all lies, all based on — no evidence, no facts behind those claims made by the press. It got so bad, the Washington Post had to go back and say, well, we’re gonna make corrections in our stories about the Trump-Russia situation, that whole charade that they — so, yeah, the American people get it now.

The American people have common sense. They understand that they were fed a bunch of baloney by the left-wing press. They understand that the Democrat Party is now controlled by the hard left, and they’re saying, time-out. Time-out. Again, the first sign was Virginia. And I think that’s only gonna pick up. There’s a reason why 71% of our fellow citizens think the country’s on the wrong track. I mean, because it is. It is on the wrong track, but Americans are gonna turn it around. And, again, I’ve said this a couple of times, but you can see it happening, and it’s so encouraging. It’s what we all sort of instinctively know about our fellow citizens, about this great country, Americans get it right, and you’re seeing that now start to play out.

BUCK: We’re, Congressman Jim Jordan, wishing you the best of luck here on your book coming out on Tuesday, Do What You Said You Would Do: Fighting for Freedom in the Swamp. Congressman Jordan, always good to have you, sir. We’ll talk to you soon.

REP. JORDAN: You bet. Good to be with you guys, take care.