CLAY: We’re joined now by Nick Searcy, producer, director, film and TV star. He has a new movie out about January 6, called Capitol Punishment. You can do find the movie at CapitolPunishment.locals.com or GiveMeLibertyNow.org. Nick, you also live part of the year down in Franklin, Tennessee, near where I live. And you are deeply concerned about what’s going on with the January 6th political prisoners. What’s the latest you can tell us, and what will we learn by watching the movie?

SEARCY: Well, you’ll learn what the truth is, as opposed to what the January 6th committee is putting out. I mean, the January 6th committee is really just like the Mueller investigation. It’s really a fake investigation, that is meant to cover up what they actually did. And it’s come out, that Adam Kinzinger brought a gun to the Capitol on January 6 and told his staff not to come in. And Liz Cheney, she brought a retired Secret Service agent with her that day for security, because they knew something was going to happen. And so what’s going on now, is they are persecuting innocent Americans who happened to go to Washington that day in order to cover up the actual crimes that the people in Washington committed.

BUCK: Nick, thanks for being with us, it’s Buck. What regarding some of the stories of people, you mentioned the way that they’re tracking down over all over the nation. People who were there, and many of whom didn’t really do anything. They were there, but they didn’t actually attack police or they don’t engage in violent or, or even destructive behavior necessarily. And have had the FBI show up, as though, they’re a member of al-Qaeda or something. What are some of the stories that you tell in the documentary, in the film you made here, about just how they’re being prosecuted?

SEARCY: Well, one of the people featured in the film is Derek Kinnison. And he went to Washington that day with his friend, Tony Martinez. They didn’t go in the building. And both of them had their homes raided by the FBI, a 6:00 a.m. raid. S.W.A.T. teams. Armored vehicles coming down– their suburban streets. And their families pulled out into the street. Tony Martinez’s daughter, Isabelle, who was 13 years old, was handcuffed by the FBI. And what they do, is they do this to humiliate them in front of their neighbors, as well as scare everybody to death, that you should never, ever, ever resist the government ever again. And what’s happened to these people is chilling. And it’s continuing to happen.

I just heard from a lady last night, who had her home raided a month ago. On June 22nd. And another person, who never went inside the building, who just went there, and protested peacefully and came home. This is an intimidation tactic that you’re used to seeing in a totalitarian country. But you’re not seeing this kind of tactic in the United States of America. I really couldn’t believe it. After we started making the film and we started uncovering these stories. I was shocked. I could not believe that this was going on. 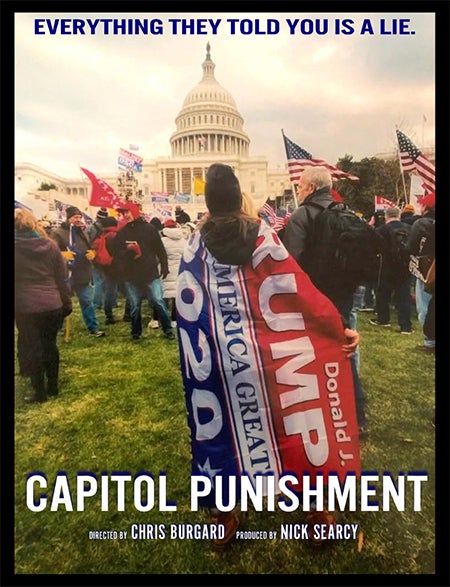 CLAY: Nick, I’m with you, that I was shocked also, and I’m coming to it from the perspective of an attorney. We’ve had Julie Kelly on, who I bet you’ve interacted with some as a part of covering this January 6 political persecutions. And she told us, just as recently, a couple of weeks ago, Nick, we had her on. And she said there’s still 80 people being held in Washington, DC. We’re coming up on certainly well over a year and a half since January 6th, and a lot of these guys still don’t have access to good attorneys. They still haven’t had any resolution to their cases. Some of them are still in solitary confinement. And yet, it’s as if they don’t exist. It’s wild.

SEARCY: Yeah. And I know of at least one case in — in which a man is still incarcerated. He’s been in there since January 6. They are holding this man, because he actually witnessed the death of Rosanne Boyland, who was the second woman who was murdered that day. And they want to say that Rosanne Boyland — they put out the story that Rosanne Boyland died of a drug overdose. She didn’t. She was beaten to death. And one of the people there was a witness to that and that’s why they don’t want him to speak. They don’t want that to come out. And that is what is such a travesty about the January 6th committee.

If they were really were a fact-finding committee, and they really wanted to find out what was happening, they would call people like this man, who saw what happened to Rosanne Boyland. They would call Ray Epps. They would ask Ray Epps why he was telling people to go inside the Capitol for two days. I mean, they would also investigate the fact that John Sullivan was in the hallway when Ashli Babbitt was killed. John Sullivan is a known BLM activist. And you have Christopher Wray getting up and testifying that there’s no knowledge of any BLM or Antifa presence there. And I have the footage. It’s in the movie. I’m just some actor in Hollywood. I know Christopher Wray knows who was in there. And that’s the joke about the January 6 committee. They’re not interested in the truth. They’re just advancing an agenda.

Tucker’s SHOCKING expose on Corporate Media’s cover-up of Ray Epps will make your jaw DROP to the floor😳 pic.twitter.com/8nZ13bdwyx

BUCK: Nick, where can people go to watch this film, and how can they support the efforts to get out more of the suppressed truth?

SEARCY: Well, you can go to NickSearcy.locals.com. You can watch the film there. You can also go to CapitolPunishmentTheMovie.com. Both of those places you can purchase the film on streaming, or on a DVD. And another thing that has been happening with One America News has been airing it opposite the — whenever the January 6th show trials are on. They air Capitol Punishment as counter programming. So, there’s a lot of ways to see the film. But the important thing about the film, is it’s going to show you what the establishment in Washington is covering up. And that is the way they are torturing common ordinary citizens, who disagree with the government, thought something was fishy about the election. And wanted to publicly say something about it. They’re trying to send a message to everyone. Don’t you ever, ever resist us ever again.

CLAY: Good stuff, Nick. One last question for you. You come out of the Hollywood universe. We certainly hear all the time, about the left-wing bias in Hollywood. One of the things I’ve seen, however, there’s a lot of people who are sort of under the radar in Hollywood, that agree with a lot of what Trump was saying and a lot of what we say on a regular basis on this program. What was your experience in sort of interacting with undercover Trump supporters in the entertainment universe?

SEARCY: I have a lot of friends, and they are people that you would know, actors whose faces you would know, without their names, who totally agree with me. They always say to me, “I agree with you totally, but you’re insane speaking out the way you do. If I said what you said, I would never work again.” And I always tell them, look, I’m working a lot. I’m just not working with the same people I used to work with. And I think what we have to do in Hollywood, we have to get our courage up, and start standing up to these bullies. Because that’s what they are. They want to intimidate you into silence, exactly like what the January 6th committee is doing. They want to make sure you shut up, so that no one hears your point of view. And I keep telling them, there’s people out there you can work with that I work with all the time. Don’t worry about it. Say what you think. Hopefully, more and more of us will have the courage to start speaking out.

BUCK: Nick Searcy. Go check out Capitol Punishment, the movie. Nick, thanks so much for being with us.

SEARCY: Thanks so much, Buck and Clay, it was an honor.