BUCK: Why is the DOJ targeting parents as possible domestic terrorists for speaking out at school board meetings? It sounds insane; it is. But it also is real according to this whistleblower who has come forward. Congressman Jim Jordan’s already written a letter about it — we’ll talk to him later in the week — a letter to the DOJ.

We’re now joined by somebody who knows the education apparatus quite well in this country, Betsy DeVos. She was the education secretary under President Trump. She’s got a book coming out next year, Hostages to the Cause: The Fight for Education and the Future of the American Child. Ms. DeVos, thanks for being with us.

DEVOS: It’s a pleasure to be with you both. 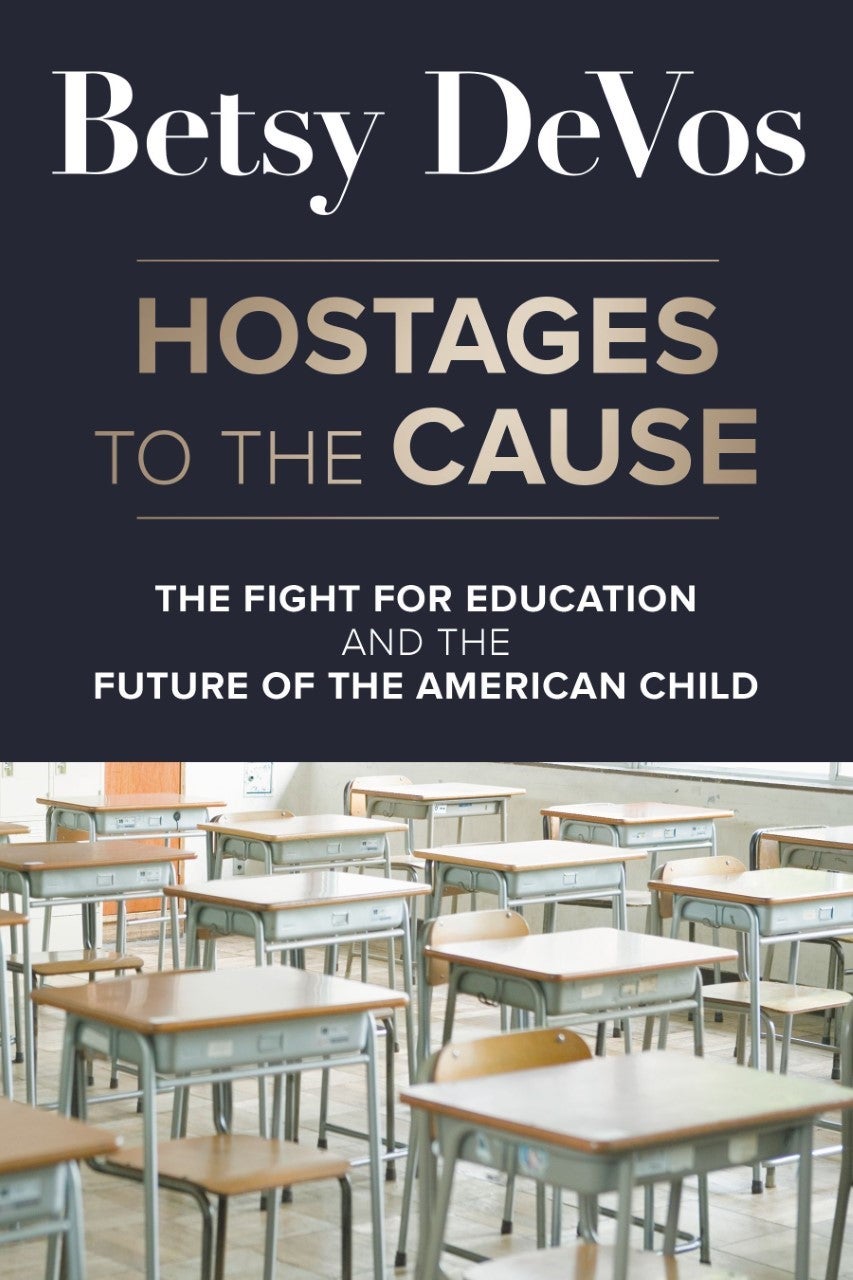 BUCK: So let’s start with what you’re seeing here just in the last, well, last 24 hours or so, but stretching back a little beyond that too on to the initial letter put out by the attorney general about parents showing up at school board meetings as somebody who was at the top of the education department bureaucracy for years, what to a make of this? What do you think about as somebody who focuses in on education when parents are being targeted for wanting to have a bigger say in their kids’ futures?

DEVOS: Well, first of all, parents have every right to have a lot of say in their kids’ futures. And this was and is a giant overreach and overstep on the part of the federal government. What we know is that the National School Board Association colluded — worked with the White House, worked with the Department of Justice — to complain about the fact that parents were showing up at school board meetings asking to know about what was going on in their kids’ schools.

And not more than five days later, the DOJ — Merrick Garland himself — issues this memo which talks about going after and investigating parents that are simply speaking their minds. Now, clearly threats of violence are inappropriate. But local officials, local authorities are meant to take care of issues like that. The Department of Justice is the top law enforcement entity in our country, and this act was just a huge overreach. Now we find that not only has this been happening, but they’ve set up a system to internally to track parents and perceive threats of violence wherever they occur.

CLAY: Secretary DeVos, do you think…? We talked a little bit about this on the show. We now have a vaccine available for covid for 5- to 11-year-olds. We’ve seen the Biden administration take as aggressive of a policy position on vaccines as they can. Do you think they may try to mandate federally vaccines in the schools for children? Should parents in your mind be concerned about that?

DEVOS: Well, I think everyone should be concerned, again, about an overreach on the part of the federal government into an area that is a family, the parents’ decision. And I would not be surprised if this was attempted. I think it would be a horrific move, but I would not be surprised based on everything else we’ve seen from this Biden administration.

BUCK: We’re speaking to former education secretary under President Trump, Betsy DeVos. Ms. DeVos, the CRT rebellion of sorts that played out in Virginia, most notably, with the win of governor-elect Glenn Youngkin and the many parents speaking out despite the saber rattling of sorts from the DOJ, speaking out against critical race theory or really its offshoots and variations, racial Marxism, however people want to describe it How prevalent is that within the education bureaucracy? And what can we do about it?

DEVOS: Well, I think, first of all, the last year and a half has really laid bare the many failings of our public education system starting with the very long and unnecessary lockdowns keeping kids out of school for well over a year in most cases and making sure that kids fall farther and farther behind. Ones who are hurt most are the ones who are most vulnerable, the ones who need to be in school absolutely the most.

Starting with that, and then with the teachers unions continuing to play their games to try to get their agenda enacted, to get more resources into their system. And so the whole critical race theory and all of the issues about curriculum have come to the fore ’cause parents have actually seen what is actually going on in their kids’ classrooms and they’re not happy, and justifiably so.

What we saw in the Virginia governor’s race really gave voice to what many in the Democrat Party have long known, and that is they are controlled by the teachers unions, and they don’t believe that parents should have the control and say over their kids’ education. Terry McAuliffe was the embodiment of that.

CLAY: We’re talking to former education secretary under Donald Trump, Betsy DeVos. I want to give you a lot of credit for this, Secretary. The kangaroo courts inside of colleges and universities when it came to sexual assault have been absolute disasters procedurally in terms of if you accuse somebody of sexual assault on a campus, oftentimes you had no right to confront your accuser. You couldn’t cross-examine them. Is that getting worse now that Joe Biden is back in office? And for many parents out there who have had to go through these situations with their sons or their daughters, how broken is that system, and how do we fix it and keep it fixed?

DEVOS: Well, great question. This was an issue we tackled head on in Trump administration, and we went through the arduous rule-making process to make it clear what the responsibilities are on the part of campuses when there is sexual misconduct on campus. It gives both those who are the complainant and those who are being complained against equal rights and equal footing and a process and framework under which they are supposed to proceed with these things.

What we saw from the Obama administration that only issued what’s called a Dear Colleague letter that did not have the force of law, but they bullied schools into following it. It was a denial of due process in all too many cases, but we saw hundreds of cases being brought forward to federal courts and district courts that were overturned in favor of the student who did not receive due process. That’s not right for those who are victims. That’s not right for those who do not have due process. It hurts everyone. So hour rule, hour framework is current existing law, and schools must follow it.

BUCK: Ms. DeVos, I know your book coming out next year; it’s called Hostages to the Cause: The Fight for Education, The Future of the American Child. You are known and were known before you were education secretary as a school choice advocate. How close are we or how close could we be perhaps under a different administration to getting school choice, and should that be the central fight right now for parents who are concerned, other than CRT, let’s say, for parents who are concerned about the future of their children’s education, is school choice the top issue?

DEVOS: Absolutely. School choice, education, freedom, empowering families to choose the right fit and the right setting for their children is an imperative. We’re seeing movement across the country. And, again, this whole covid pandemic brought it all into focus in a way that families had never really had to grapple with before. Many families who thought they were living in a, quote, good district were let down by their schools.

Now they’re seeing curriculums that they are appalled by. So giving families the power to take their children’s education dollars. I like to use the metaphor of a backpack. Kids go to school every day with the stuff they need for the day. Let’s metaphorically put the resources for that child in that backpack and let the families make decisions as to which school and which setting is going to be right for each of their children. That is the solution long-term. Having transparency and competition in the marketplace for education will fundamentally change things for the better for every kid.

BUCK: Former education secretary Betsy DeVos. The book, Hostages to the Cause, is coming out next year. Ms. DeVos, thanks so much for being with us. We appreciate it.