RAND PAUL: In an email exchange with Dr. Collins, you conspire — and I quote here directly from the email — “to create a quick and devastating published takedown of three prominent epidemiologist from Harvard, Oxford and Stanford.” Apparently there’s a lot of fringe epidemiologists at Harvard, Oxford and Stanford. A “published takedown,” you know, doesn’t exactly conjure up the image of a dispassionate scientist.

Instead of engaging them on the merits, you and Dr. Collins sought to smear them as “fringe” and take them down — and not in journals, in lay press. This is not only anesthetic to the scientific method. It’s the epitome of cheap politics and it’s reprehensible, Dr. Fauci. Do you really think it’s appropriate to use your $420,000 salary to attack scientists that disagree with you?

BUCK: Is there anything more satisfying that you can watch on Capitol Hill these days than Senator Rand Paul having a go at Dr. Fauci over just all the nonsense, dishonesty, catastrophic policy, decision-making, authoritarianism? There’s Senator Paul pushing him on, “Why would you, as a public sector bureaucrat, essentially coordinate the undermining of other top scientific voices who disagree with you?”

We all know the answer to it, but he should make Fauci answer the question publicly, so we all have to hear it. And of course, then Fauci did the whole — Clay, you saw this, right? — “People are mean to me. There are threats against me.” There are threats against everybody that I know in conservative media all the time. People have stalkers. They have crazy people sending them things or whatever. That doesn’t answer — and that’s bad, of course, reprehensible. Nobody should do those things to anybody. It doesn’t answer the question, though, Fauci, and what was remarkable was when you brought it up, I think even Alex was like, “Wait, they pulled the video of the Pfizer CEO?”

BUCK: You can’t watch it on Twitter anymore. Not allowed!

CLAY: You can’t see this anymore. We played it in hour 1. Listen to this.

ALBERT BOURLA: We know that the three — the two-dose of the vaccine offer very limited protection, if any, the three doses with a booster. They offer reasonable protection against hospitalization and deaths and less protection against infection. Now, we are working on a new version of our vaccine — the 1.1 — that will cover Omicron as well. And of course, we are waiting to have the final results. The new vaccine will be ready in March.

CLAY: So this is staggering to me. So let me just kind of lay out what exactly is going on here for people who are listening. We just played that clip, which is Pfizer’s CEO. We sent that clip… Buck and I go through and look at a lot of different audio, and we send it, and our crew does a fantastic job grabbing audio. We sent in that clip, and since that clip started to go viral, the Pfizer people…

I’m assuming it was the Pfizer people, because they would theoretically have the copyright to that clip that we played. They went to Twitter, and they made a copyright claim, and Twitter has pulled that video that you just heard off of all social media platforms. Now, why would this be going on? Well, I think because they don’t want (chuckles) Pfizer’s CEO admitting that the vaccine — which currently is a part of the vaccine mandate before the Supreme Court — that there is, in his own words, very limited, if any, protection that is offered for that vaccine for the first two doses.

And that flies directly in the face of the Biden administration narrative, Buck, the one they just argued Friday at the Supreme Court, which is, “Oh, if everybody was vaccinated, then we wouldn’t have these issues with covid!” Let me hit the data again: 95% of people 65 and older have gotten at least one covid shot, 86% of people 18 and over have gotten at least one covid shot. That’s according to New York Times data. So if that data is accurate — which there’s no reason to believe it isn’t — how in the world…? The question I think that a lot of people follow there is, “Wait a minute. If these massive vaccine rates have occurred and we’re setting all time hospitalization covid records, how is that possible?” There’s a disconnect.

BUCK: There’s also the reality here that while we’re telling you what’s actually happening, what the data is, and there are some who are recognizing that if you’re going to live in the real world, the Fauciite narrative is essentially in collapse, right? What we’ve been told isn’t true. But there are still people that realize — for either the purposes of ratings or politics or both — it’s very useful to terrify people. This was on NBC Nightly News, Clay. I sent this into our team last night. It is stunning. Listen to how they explain what’s going on with kids and covid. It’s something that I’m telling you, when you hear it, you’re gonna say, “It’s like they don’t read the news over at NBC News.”

LESTER HOLT: Good evening. The numbers remain staggering tonight, stretching our patience and our capacity to fix all that covid has broken. From the millions forced to isolate at home to the emergency rooms and ICUs desperately short on staff but filled with the sick, including the very young. We’ve learned that over this week more than 580,000 child covid cases were recorded, tripling the number of cases two weeks prior! 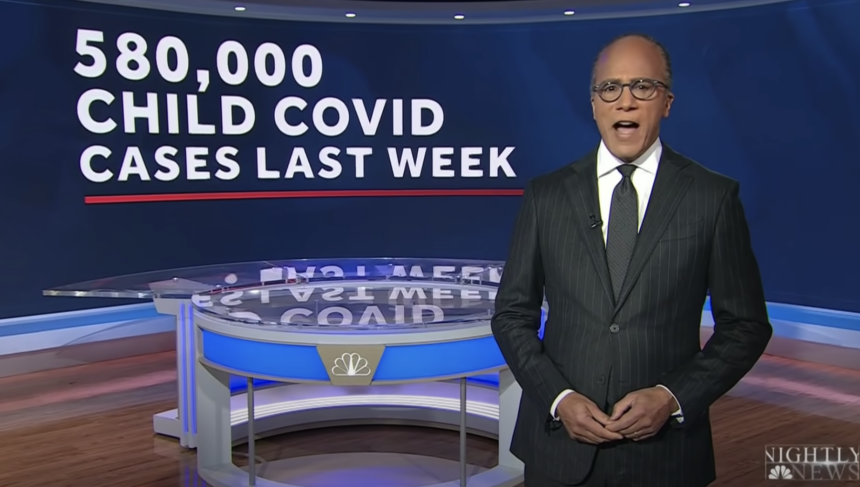 BUCK: Covid cases in children are not serious 99-point — what — 7, point 8 percent of the time?

CLAY: I think even higher.

BUCK: Probably 99.999. The real CDC data for 12 and under, forget about what idiots on The View and other places say, the real the CDC data is something like 150 children maybe credibly have died from a severe covid case. And keep in mind that every year of flu season about 50 to 150 die of flu in that same age category. Every death is a tragedy, but acting like when you have hundreds of thousands of cases — and maybe, maybe 50 to a hundred children have actually died of those hundreds of thousands of cases — and we’re gonna shut down society in some capacity in schools to stop this is utter madness.

CLAY: Not only that, Buck. These are known cases. We’re likely in the tens to millions —

CLAY: — of actual kids that have had covid.

BUCK: This is why another era where the numbers, we’ve to keep it in mind: The mortality data in general is crap the way that it is presented to you.

BUCK: It is, because if you have 150 kids, let’s say, who have died from covid — and it’s roughly that. You can go fact check me at CDC.gov. They put this on all my Facebook and Twitter posts. Right? Even when I list something from CDC.gov, I’m on the list of, you know, Fauci hates me, and I don’t know if he hates you. He’s probably a Georgia Bulldogs fan. I don’t know.

CLAY: Well, I’ll say this. CNN is angry about some of the tweets that I’ve been sending —

BUCK: There we go.

CLAY: — so they’ve been fact-checking me.

BUCK: Literally the worst new organizations. You should reply, “Didn’t you guys ban me forever, wimps?”

CLAY: “I would reply but you banned me for life.”

BUCK: Yeah, exactly. So on the mortality data let’s all remember that if you’re talking about 150 kids who have died from covid over the course of two years now, and it’s something like that. They said hundreds of thousands of infections. The number is actually much bigger than that, which should mean that people are much less concerned about children getting covid because in the early days of the pandemic, they thought they were catching one in 10 cases, maybe.

Maybe now we’d be catching one in five which would be remarkable. It’s probably more like one in 10, especially among kids who we all know beat the virus so quickly, they don’t… Remember when 40% of cases were asymptomatic, Clay? What happened? Remember when they would talk about 40% of all cases are asymptomatic? Somehow that fell off the radar. What’s going on?

CLAY: Yeah. And look. We’re setting new daily records for number of people that are testing positive for covid — to your point, Buck — even though the vast majority, I think, of people who are testing positive are doing so either at home or they’re sick and they don’t even bother getting tested at all because it doesn’t make sense.